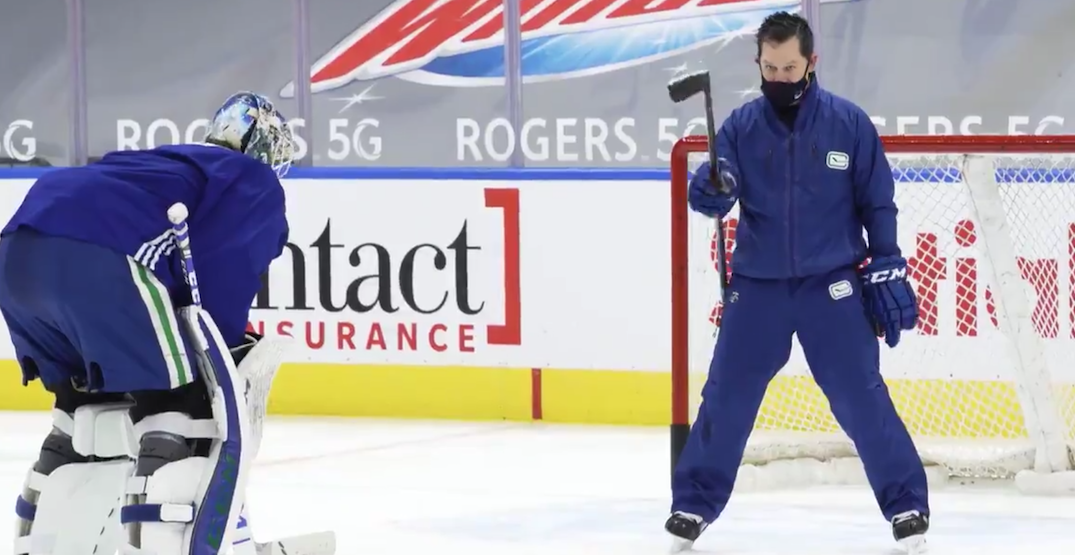 If there was any doubt left that the Vancouver Canucks were taking a huge risk by leaving goalie coach Ian Clark unsigned, there isn’t anymore.

Like head coach Travis Green, Clark is without a contract beyond this season, and will soon be able to go to the highest bidder. As one of the most well-regarded goaltending coaches in the NHL, there shouldn’t be a shortage of teams lined up for his services.

Clark returned to Vancouver in 2018, following seven years as the goaltending coach of the Columbus Blue Jackets. Sergei Bobrovsky won two Vezina Trophies under his watch in Columbus, and promptly saw his numbers drop after Clark left the Blue Jackets.

Jacob Markstrom developed into an elite goaltender after just half a season working with Clark, and was in the Vezina Trophy conversation last season. Now with the Calgary Flames, Markstrom is going to post his worst save percentage in five years.

Clark’s latest star student is Thatcher Demko, who went above and beyond when asked about the uncertain future of the Canucks goalie coach. Demko is usually stoic in interviews, so his comments carry extra weight.

“Clarkie, he’s unbelievable. I owe probably just about everything to him,” he said.

“Obviously I’m putting in the work, but the way he’s guided me and mentored me, it’s been amazing. I desperately hope that they can figure something out, and have him return.”

Canucks GM Jim Benning thinks so highly of Demko that he signed him to a five-year, $25 million contract extension. That’s a huge commitment for a goalie, even one as promising as Demko.

There are countless examples of seemingly excellent goalies that have their game fall apart. Just look at Carter Hart this year in Philadelphia.

Or Bobrovsky, and to a lesser extent, Markstrom.

“I think the momentum that him and I have right now is exciting,” said Demko. “There’s still a ton of room for me to grow and the work that Ian and I have put in over the last few years, and just the habits and the routines, and the way that we’re able to think the game and be on the same page now is something that I’d love to continue to do down the stretch here in the next few years. I really hope he gets back here.”

The pandemic has put a financial strain on every NHL team, and the Canucks are no different. But coaches’ salaries pale in comparison to the money that players make, despite the enormous effect they can have on a team.

How would Demko play without Clark by his side? That’s a question we don’t know the answer to, which is all the more reason not to take a chance.

It’s like buying a new Ferrari and parking it in a sketchy neighbourhood without an alarm system. It might be fine, but if you’ve got the money for a Ferrari, why on Earth would you not do everything you can to take care of it?

Demko didn’t hold back about how hard this season has been on him, but through it all he established himself as a legitimate No. 1 goalie, posting a .915 save percentage.

“It’s been a crazy year, and definitely the hardest year that I’ve had to go through… I felt like it was a good year for me, just as far as taking another step in my development… just learning about myself, learning how to play through adversity at this level. I started to feel like I was understanding my game and what I had to do to be successful on a nightly basis playing a lot of games.”

"It's important for a goaltender to close the door on yesterday so they can open the door on today with a fresh mind." #Canucks Goaltending Coach Ian Clark is mic'd up working with Thatcher Demko and Braden Holtby. pic.twitter.com/dB0WeDoub3