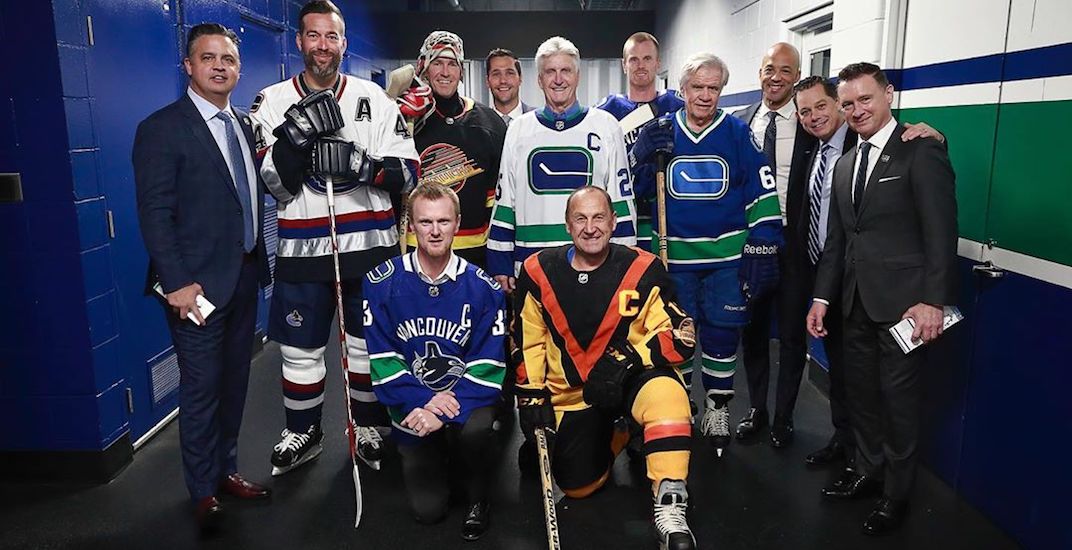 The Vancouver Canucks will have a rare double-vintage jersey game on Saturday, as the team turns back the clock for 80s day.

With an eclectic jersey history, the Canucks have plenty of vintage uniforms to choose from. On Saturday afternoon, they’ll go from their ugliest look to perhaps their most beautiful.

The yellow Flying Vs will make their majestic return during the team’s warmup, as the Canucks suit up in one of the most original uniforms ever created.

Then, for the game, the Canucks will wear their black Flying Skate jerseys for the second time this season. This wasn’t originally scheduled to be a retro uniform night beyond warmup, but the jerseys were so well received last month, that the Canucks decided to add another Flying Skate night to this season’s schedule.

The move also allows the team to colour coordinate for the Flying V jerseys. Imagine those things mixed with blue and green socks, gloves, helmets, and pants? No, just no.

As much as the Flying Vs are ugly (don’t @ me) they really ought to be brought back for a game or two in the future. They’re incredibly unique, and would surely be the talk of sportscasts across North America.

The Canucks will celebrate the 1980s against their expansion cousins, the Buffalo Sabres, who are also celebrating their 50th anniversary season.

The will use the occasion to celebrate the 1982 Stanley Cup Finalist team, with “prominent 80s Canucks” participating in a special pre-game ceremony.

That usually means the likes of Stan Smyl, Thomas Gradin, Harold Snepsts, Darcy Rota, and Richard Brodeur will be present, but it would be cool if the team celebrated some players that fans haven’t gotten to see recently too, like they did on opening night. Will we see the likes of Tony Tanti and Petri Skriko? How about a Jim Sandlak cameo? That would be cool.