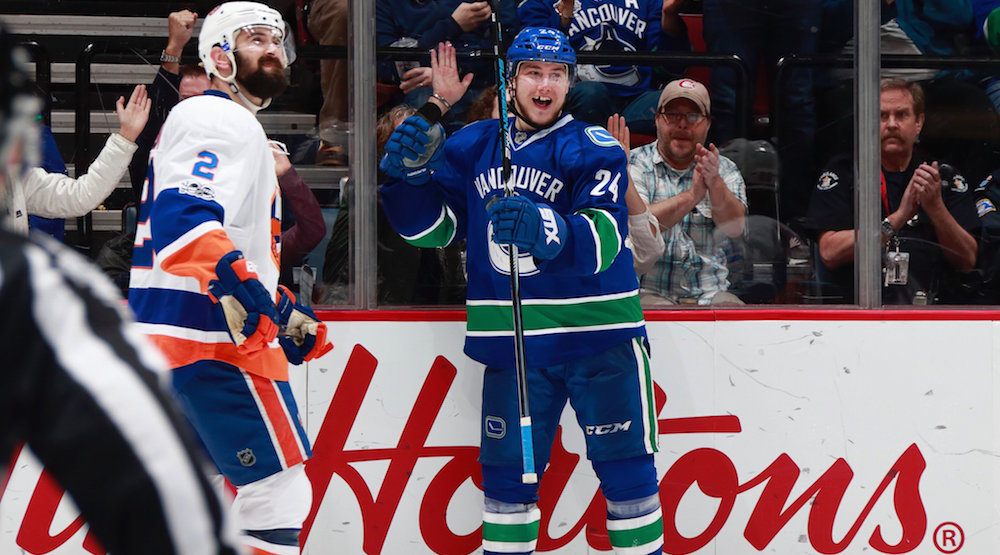 Well, that was quick.

Canucks winger Reid Boucher found his way onto waivers on Monday, News 1130’s Rick Dhaliwal reports. The 24-year-old requires waivers in order to be sent to the team’s AHL affiliate in Utica. Every other NHL team will now be given the opportunity to snap him up for free.

Boucher, who had seven points (5-2-7) in 27 games with the Canucks last season, is no stranger to waivers.

He was claimed off waivers on three separate occasions last season, going from New Jersey to Nashville, from Nashville back to New Jersey, before eventually settling with the Canucks.

It was always going to be an uphill climb for Boucher to make the opening night roster this year, given the number of more established veterans vying for spots in the Canucks lineup.

Boucher also has to fend off young players like Brock Boeser, Jake Virtanen, and Nikolay Goldobin – as well as Anton Rodin – for one of Vancouver’s final forward spots.

Still, you have to wonder how serious of a look he was given. The Lansing, Michigan native appeared in just two preseason games, including one in China, before being cut.

We’ll see if anyone claims him. An early cut could be a strategic decision in an effort to sneak him through to Utica, not unlike when Jacob Markstrom was given a quick demotion to the Comets in 2014. The longer preseason goes, the more injuries set in with other teams, making a player like Boucher potentially more desirable.

The Canucks cut 10 players on Saturday, including Jordan Subban, but still have 36 players remaining on their training camp roster. Expect more cuts to happen quickly this week, as the team is back together for the first time since their week-long trip to China.

1st practice for @Canucks returning from China. Sedins are skating with Boeser while Dahlen is practicing for 1st time since bout of mono. pic.twitter.com/rcrFd58I4n

They’ll have to trim their roster down to 23 before opening night.

Vancouver (2-3-1) has just two games remaining in preseason, at home to Calgary on Thursday and Edmonton on Saturday.