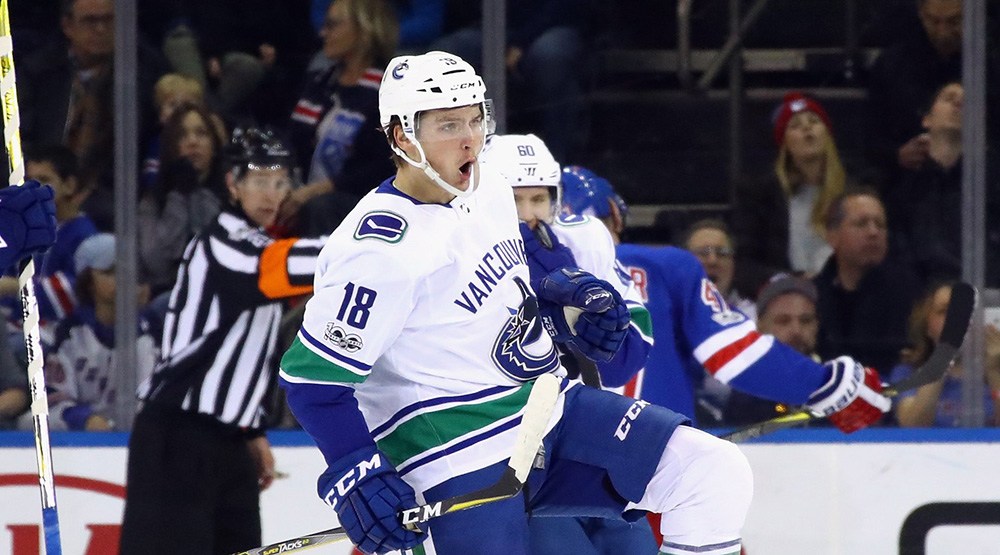 They couldn’t finish the job. Up 2-0 halfway through the game, Markstrom on his way to the first shutout of his career, the Canucks were running the Rangers out of New York.

Even strength shot attempts were 32-22 through two periods and the Rangers looked half asleep.

But New York came back to tie it at twos, helped by the ever-reliable softy Markstrom will allow.

Vancouver looked great in OT, they nearly won in the shootout too, but wound up losing 4-3. It was a point in the standings they just gave away.

Let’s look at the positives for a second, though. For Canucks fans who woke up and devoted three hours of their Sunday to this game, they enjoyed themselves.

The Sedins were dominant, Virtanen played well and scored, Boeser took his first shootout attempt and buried it, and the shootout took seven rounds to conclude.

If you’re not going to have a contender, the next best thing is entertaining hockey. Can’t argue we have that in Vancouver now, and it’s a hell of an upgrade on what’s come before.

And hey, Edmonton sucks too, so things aren’t that bad for Canucks fans right now, are they?

1. The day Marky’s leash ran out

Markstrom has been fine..not fine enough to get the bulk of the starts. This was Nilsson’s game.

Blake and many others made their case before the game, but it was Markstrom who played.

Halfway through, it looked like the right call as Marky was looking like he was on his way to that shutout with crazy saves like this.

But he should have had this Grabner shot early in the third that tied the game at 2-2.

The other two – hard to say he was bad on them. They were good goals.

Here’s Fast’s at the end of the second.

So we know where this is going: for the next few days everyone will be up in arms about the way Nilsson’s been treated so far. But keep in mind Nilsson lost a few starts because he had a baby, and he probably lost Sunday’s start because of this.

#Canucks Green on goalie starts: “I don’t map out goalie games. I have an idea. Part of it was Nilsson was under the weather the last few days. That played into the decision.”

Anyway, he’s about to get that run. And if he starts taking over as number one, make sure you give Daniel Wagner from Pass it to Bulis all the backpats for predicting Nilsson would take over the net in his season preview podcast with me, Ryan Biech, and Rob Williams.

2. A big W for the analytics

It was nearly a massive, resounding W, but they’ll have to settle for “big” after Markstrom sabotaged them and the Canucks blew the lead.

Since the season began Canucks Army’s Jeremy Davis, Ryan Biech, Jeremy Davis, Patrick Johnston from the Province, and many others have been talking about how bad Gudbranson and Sutter have been for the Canucks.

The shot attempt stats show it loud and clear too. Here they are, with the worst at the top. 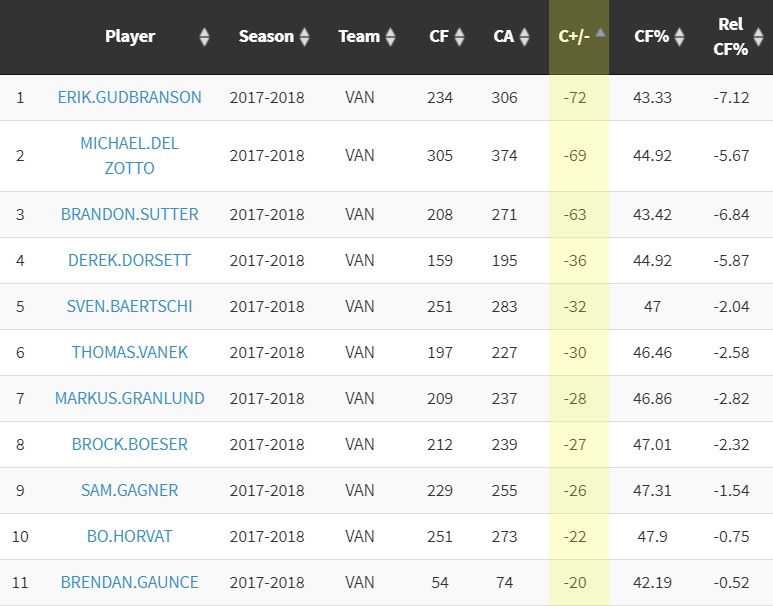 Take those two shot attempt black holes out of the lineup and all of a sudden the Canucks were dominating possession.

So say what you will about the need to win battles in front of your own net and in the corners, if the puck never ends up there, there’s no need for it.

Don’t forget that this mentality has got Pittsburgh the Stanley Cup for two straight years.

With Green’s favourite shut down guys missing, the biggest beneficiaries were the Sedins and Eriksson. By the minutes, they were effectively Vancouver’s top line once again. And for their part, they made it look like their ice time should’ve never been limited in the first place.

There was this one-handed Loui chance early in the first.

This old-school Sedin shift in the second.

And this near game-winning goal by Daniel on the 2-on-1 at the end of regulation.

Loui did get this one.

But take a look at these numbers to see what could’ve been if not for Lundqvist stoning them over and over. 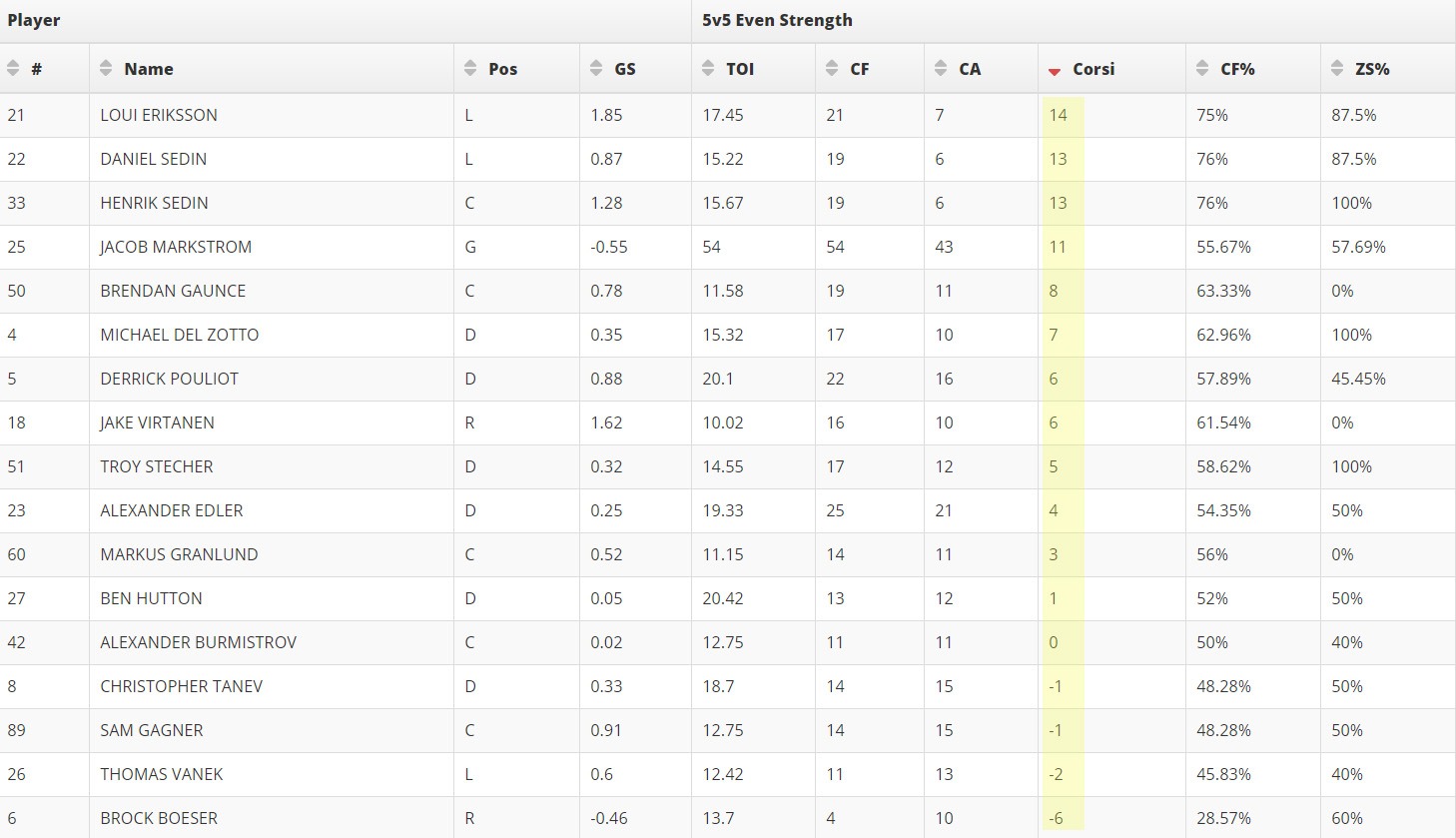 Hutton shot ahead of Eriksson, Virtanen, Burmistrov, and Edler.

He missed, so it becomes a bit of a hindsight is 20/20 thing, but you do have to give the coaching staff credit for doing their homework – Hutton scored on an overtime penalty shot last season.

Boeser’s 1/1 in the shootout too now.

Baertschi and Boeser were the two Canucks who scored in the shootout, btw.

With seven points in eight games, Eriksson has been one of Vancouver’s best players since returning from injury

Here are the goals.

Sure, two out of the three were lucky. Still, the shot attempt numbers show how well he’s really playing.

What’s really notable about Loui’s return to prominence is that we’ve heard Green talking about how he’s been telling Eriksson to attack the net more and get himself in scoring areas.

It’s great coaching by Green, and the only question it leaves for me is why is he not in Jake’s ear every two minutes repeating the same thing?

This is it. This should be the end of the mainstream media vs. bloggers debate.

This thread by Quinlan explains the problem in perfect detail, and why there is a debate or feud at all. 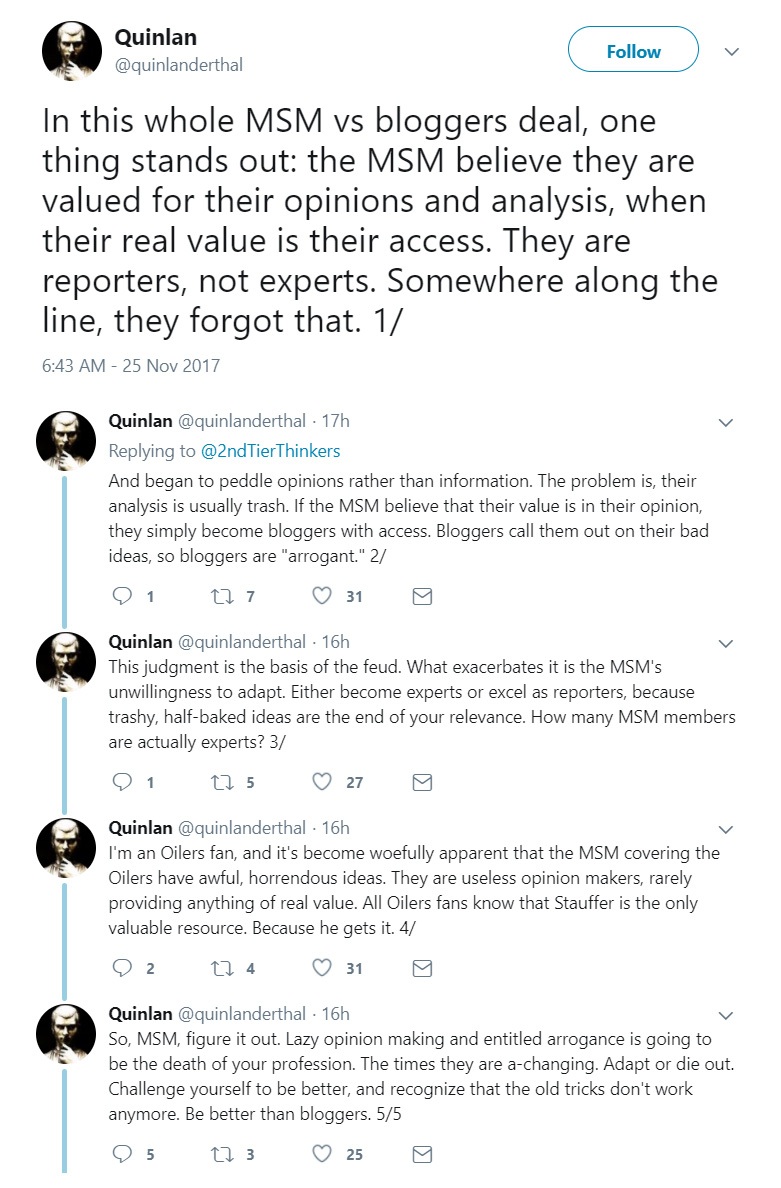 Will it be the end? Of course not. Really, it’s amazing it’s still happening. You’d think all the hiring of analytics bloggers by NHL teams would serve as undeniable proof they’re the ones with more valuable ideas. I mean, when was the last time a member of the mainstream media was hired?

Who knows, maybe the problem is with many of the best bloggers being hired and silenced by teams, it leaves the rest to fend for themselves against the MSM, who never go anywhere except from Toronto to Vancouver, apparently.

Note: Thanks to Ryan Biech for his help with many of the gifs in this post