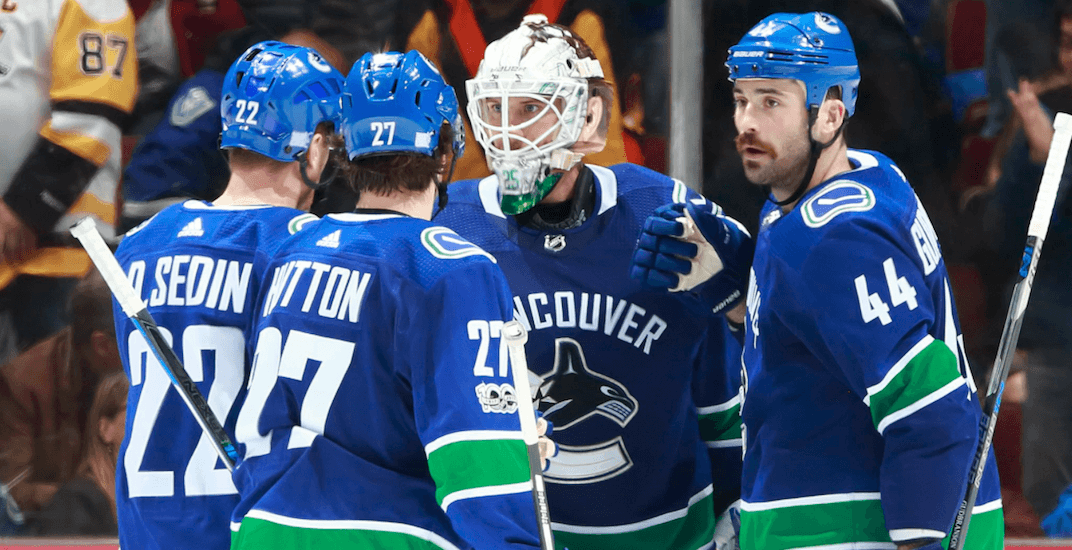 Canucks fans are not happy.

When your team sits 28th in the league, that’s bound to happen.

But that’s not all that had Canucks nation pissed off on Monday.

As the clock struck 12 noon and another NHL trade deadline came and went, Canucks general manager Jim Benning again had to explain why his team had an underwhelming day of trading.

While this wasn’t close to the debacle of 2016 when Vancouver was left holding the expiring contracts of Dan Hamhuis and Radim Vrbata, it wasn’t a great moment for the rebuild.

Most of the anger of the fanbase stemmed from the Thomas Vanek trade. Signed to a one-year contract in September, he was always going to be dealt at the deadline. Fans counted on a third-round pick or something similar to what Detroit got last year for the veteran goal-scoring winger all year.

The Canucks ended up with Tyler Motte, a nearly 23-year-old centre with just 64 games of NHL experience, and a salary dump in the form of Jussi Jokinen.

Motte could turn into a bonafide NHL player, but given what he’s accomplished, the odds are stacked against him becoming a difference-maker at this point.

Canucks fans were hungry for draft picks for Vanek, and so was management.

“We talked to every team in the league,” said Benning. “We would have preferred getting picks back, that wasn’t available to us. We think we did the next best thing by getting a good, young player that our scouts like.”

NHL insiders warned that Vanek’s stock was not going to be as high as some fans thought – despite the fact he is enjoying a good season with 41 points (17-24-41) in 61 games. Unfortunately for the Canucks, his reputation as not being a ‘big-game player’ preceded him – rightly or wrongly.

As fans and media, we don’t know how conversations progressed. Could another general manager have gotten more for Vanek? Perhaps a more shrewd negotiator would have squeezed out a fourth-round pick.

While the hand-wringing over the return for Vanek has gone a little over the top, particularly given that Benning got a nice return for Philip Holm in the form of Brendan Leipsic, this is about more than missing out on a late-round draft pick.

The Canucks currently have six picks in the June draft, having dealt away their fourth-rounder for Derrick Pouliot earlier this season. Just three teams – Boston, Nashville, and Calgary – currently have fewer draft picks than the Canucks.

Could they acquire more picks between now and then? It’s possible, although draft picks are usually moved with more ease at the deadline than any other time as contending teams desperately try to improve their roster. That’s when rebuilding teams like the Canucks feast on their competition.

If this was a one-off, it could be excused as bad luck. But for this management group – nearing the end of their fourth year at the helm – this is a pattern. Vancouver has averaged seven picks – equal to what they are allotted – in the Benning era. And they would have been under their allotment last year had John Tortorella not been hired by the Columbus Blue Jackets (Vancouver received a second-round pick as compensation).

Given that the Canucks have been the second-worst team in the NHL over the last three seasons – only Arizona has a worse points percentage – that’s inexcusable.

For a self-admitted rebuilding team that says they want to build through the draft, they haven’t come close to stockpiling picks.

Tougher decisions need to be made.

While the Canucks have been compared to the Maple Leafs and Oilers in recent years, a more fair comparison is materializing in New York right now.

The Rangers have decided to rebuild, and have done so decisively. In a similar situation to the Canucks four years ago, they’re choosing a different path.

After seven straight seasons making the playoffs, New York will miss the playoffs this year. Instead of fighting it, instead of tricking themselves into thinking they’re still a contender, instead of planning to retool with an aging lineup – they sent a letter to their fans explaining forward-looking plan.

A Message from Glen Sather and Jeff Gorton. pic.twitter.com/Q56CXS8vDc

They’re not delaying the inevitable because they think it wouldn’t be fair to Henrik Lundqvist, who turns 36 years old this week.

They’ve traded important players. They moved out 33-year-old Rick Nash. Michael Grabner is only 29, but he was shown the door. Same goes for their captain, Ryan McDonagh, who is still just 28.

JT Miller is second on the team in scoring and still just 24 years old, but he’s gone too.

Last year, they traded Derek Stepan and Antti Raanta for a first round pick.

Clearly, the Rangers grasped the concept that you have to give up something to get something.

In one week, the Rangers acquired six draft picks – including at least two first rounders. They’re set to walk into the 2018 draft with 10 picks, including three first rounders, plus two each in the second and third rounds.

While not all draft picks pan out, they’ve given their fans hope for the future.

Meanwhile, the Canucks are reportedly not interested in dealing Chris Tanev.

The job Benning has done with contracts and trades has been widely criticized – and rightly so. But he can still save this team at the draft table.

He’s found gems in the later rounds already, and of course he picked Brock Boeser. Imagine if he could improve his odds with even more selections?

Imagine if instead of one Brock Boeser calibre players, they had two. What if Olli Juolevi wasn’t the only top prospect in the pipeline?

Imagine if we didn’t have to wait three years to get three first rounders.

Imagine if this franchise had chosen a path similar to the Rangers, after the John Tortorella season in 2014.

The Canucks are building through the draft, but they’re not doing it aggressively enough. They’re still counting heavily on Elias Pettersson becoming a No. 1 centre – which is no guarantee. They desperately need Juolevi to pan out.

The future looks a heck of a lot brighter than it did two years ago, but after three years in the NHL’s basement it could – and should – look even brighter.