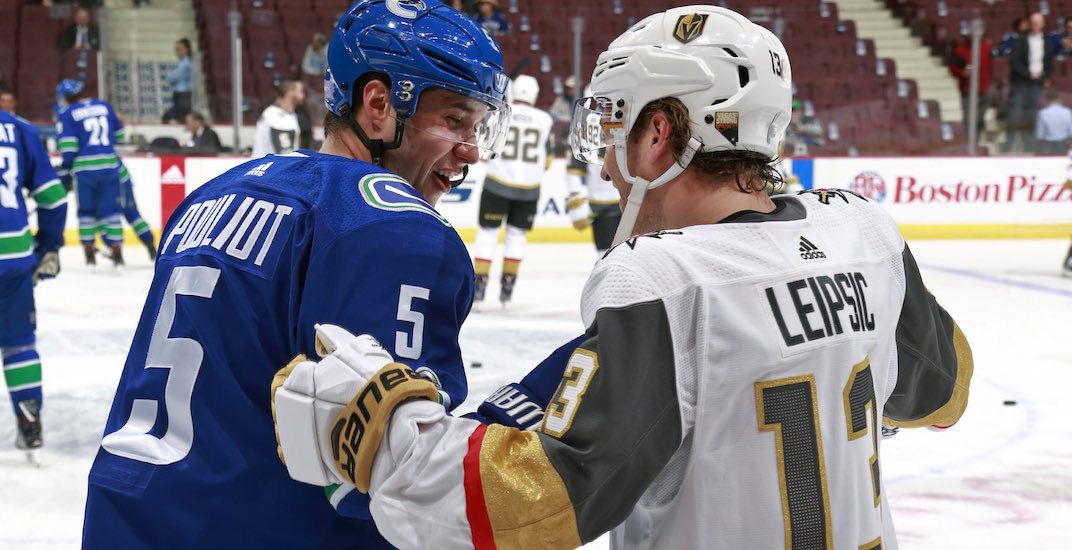 The Vancouver Canucks acquired an intriguing player on Monday, getting 23-year-old winger Brendan Leipsic in a trade with the Vegas Golden Knights.

Given that he’s only played 50 NHL games so far in his young career, for most, it took some research to figure out who he is.

One person already very familiar with his game is Canucks radio play-by-play man, Brendan Batchelor. Batchelor worked Vancouver Giants broadcasts before joining Sportsnet 650 this season, so he saw Leipsic play a ton during his four-year career in the WHL.

And he just so happens to remember a hilarious incident involving Leipsic during the WHL playoffs in 2014.

I once saw Leipsic take an unsportsmanlike conduct penalty for taking a drink out of the opposing goalie’s water bottle after a net front scrum. He was a Brad Marchand type player in junior. Super pest who could score. #Canucks

While with the Portland Winterhawks, Leipsic received a very unusual penalty for unsportsmanlike conduct after he took a drink from Vancouver Giants goaltender Payton Lee’s water bottle.

The penalty didn’t end up costing Portland, as they went on to win the game and swept the first round series. Leipsic went on to score 33 points in 20 playoff games that year too.

Top line off to the bench after a productive shift. Someone get Leipsic some water.

I mean, they really had fun with it…

Story time: a few years ago in Portland, Leipsic took a penalty for drinking out of the opposing goalies water bottle during a scrum. next home game the first 5000 fans got these special Leipsic bottles. Funniest penalty call I’ve ever seen. pic.twitter.com/vRFKpQlgQ3

Also familiar with Leipsic is Travis Green, who was coaching in Portland that year.

The Canucks would be thrilled if Leipsic, who Batchelor described as a Brad Marchand type of player in junior, can become half the player that Marchand is now.

Scout on Brendan Leipsic: "A little ball of energy that's a pain in the ass to play against and is very vocal on the ice. Puck follows him around, and he'll hunt it down at all costs. Has the skills and drive to be a solid Top-9 player for the #Canucks."

“Brendan Leipsic is a player that has some good upside,” Batchelor said in an interview on Sportsnet 650.

“He was a talented guy who could score, who would get under your skin.”

The Hockey News once called him “the most annoying prospect in hockey” but Leipsic was downplaying that part of his game in an interview with Sportsnet 650’s Satiar Shah and Alex Auld.

“As a young guy, you want to keep your lip tight a little bit,” said Leipsic. “The way I play comes along with it, playing with energy. Play with a lot of emotion. Work hard. Some of that chippiness comes with that. And the chirping, stuff like that. It’s all part of the game.”

Fans will get to see how Leipsic plays for themselves on Wednesday, when the new Canuck is expected to make his debut at Rogers Arena against the New York Rangers.