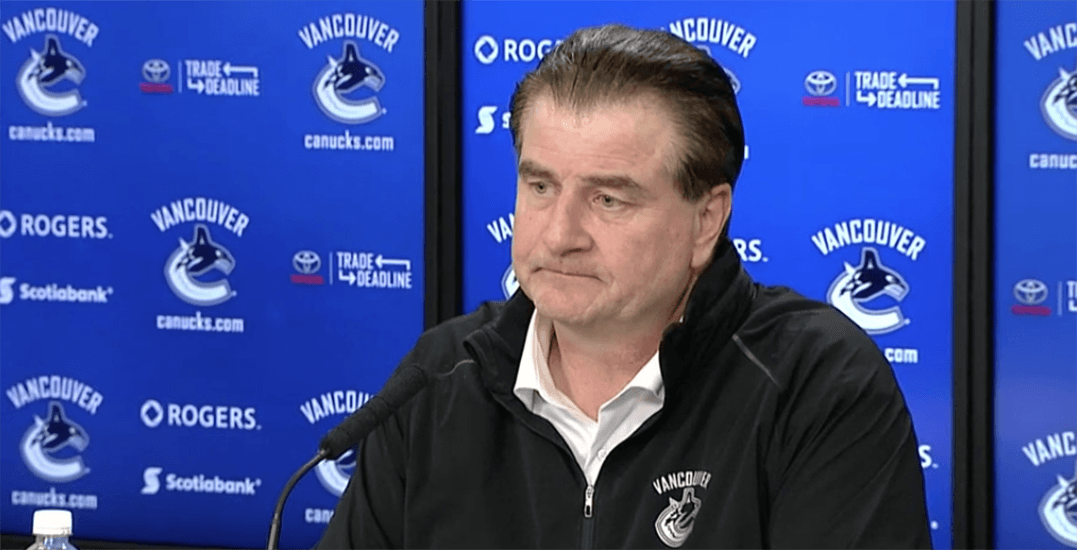 The 2018 NHL trade deadline has come and gone, and the Canucks chose to only dabble with their assets, making minor player-for-player exchanges.

Thomas Vanek was traded to the Columbus Blue Jackets for Tyler Motte and Jussi Jokinen.

Philip Holm was shipped off to the Vegas Golden Knights in return for Brandon Leipsic.

The biggest story of the day however, was the lack of draft picks that came in return to Vancouver – especially when general manager Jim Benning’s talents lie directly in drafting. The lack of desired results was enough to send some fans over the edge.

The #Canucks didn’t get a draft pick for Thomas Vanek. I’m at a complete loss for words.

How did Benning make a trade that’s WORSE than just keeping Vanek? I didn’t actually have this on my Benning whiteboard of possible disasters. lmao

BENNING: we hear you want Thomas Vanek
OTHER GM: that’s right
BENNING: we’ll give you a draft pick for him
OTHER GM: he’s your player
BENNING: ok two draft picks, but that’s my final offer

A lot of heat is currently falling on management. Benning says draft picks weren’t offered for Vanek, yet it still leaves a lot to question as far as their rebuilding strategy.

Does anyone actually believe the #Canucks when they say there weren’t any draft picks out there for Vanek? Remember, they said the same thing hours after turning down a third for Hamhuis.

Rangers already doing a better job of rebuilding than the Canucks, and they decided to rebuild three weeks ago. https://t.co/rNn8wMrUZn

My girlfriend, who only follows hockey casually: “Whenever the Canucks make trades, it reminds me of when I play a board game without understanding the rules. When it gets to be my turn, I just panic and do something that doesn’t make sense just for the sake of making a move.”

Here’s my thing with the Canucks right now: They’re openly “rebuilding”, their GM’s entire claim to fame is being a “super scout”, and they wrapped up the deadline with no outside draft picks acquired, and one their own lost in October. How does that make any sense?