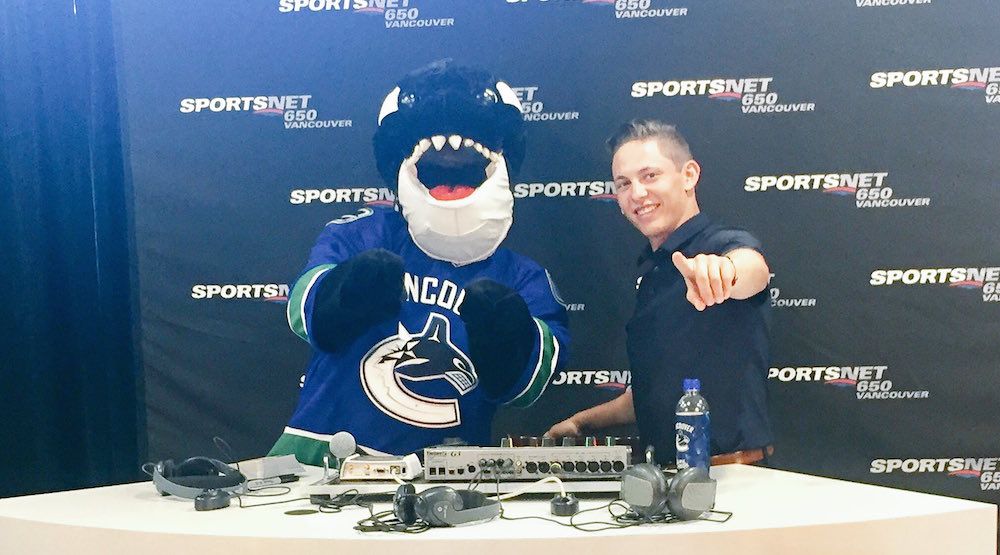 Rumours continue to run rampant on who will be filling the air at Sportsnet 650 when it debuts in September.

Not only does the brand new all-sports radio station need to hire broadcasters for their weekly daytime shows, they need to build a broadcast crew for Canucks games, for which they own the exclusive broadcasting rights.

John Shorthouse is expected to continue calling every Canucks game – on radio when he’s not busy with the television broadcast – but it appears there will be a changing of the guard for the remaining games on radio.

The Province’s Steve Ewen reports that Brendan Batchelor is likely to take over the job as radio play-by-play voice of the team. Batchelor has reportedly left his job as director of media relations and play-by-play broadcaster of the Vancouver Giants, and is expected to formally be introduced at a later date.

That’s likely bad news for Jon Abbott, who has called most Canucks games on radio with TSN 1040 since he took over from Rick Ball in 2014.

Batchelor is a young local broadcaster who has certainly paid his dues. Aside from his work with the Giants for the past four years, Batchelor has worked for TSN 1040 in several roles since 2008, and has called play-by-play for the Vancouver Whitecaps, WFC2, and the Surrey Eagles. He was even was the public address announcer for Coquitlam Express games at one time.

He’s done it all.

If Batchelor is indeed the new play-by-play man, it remains to be seen who his partner will be.

Dave Tomlinson has been the radio colour commentator for the Canucks ever since he replaced BC Sports Hall of Fame broadcaster Tom Larscheid in 2010. Will he land the gig with 650 as well? If he doesn’t, there are a number of other names that have been rumoured.

Former Canucks goaltender Alex Auld is one name that has been rumoured among people in the industry. Another former Vancouver netminder, Corey Hirsch, has been connected to the new radio station by multiple sources, and would also be a natural fit for the job.

As for the rest of 650’s programming, their shows are starting to take shape.

Steve Darling, James Cybulski, and Mira Laurence were introduced as the station’s new morning show earlier this month, and the hosts of another new show are expected to be announced next week.

A source tells Daily Hive that Scott Rintoul, Andrew Walker, and another – likely a female broadcaster – will host the afternoon drive program. Rintoul is well known in the market, while Walker is currently a host on Sportsnet Radio in Toronto.

Former Bro Jake Show producer Satiar Shah has formally left TSN 1040, with the expectation from most that he will host a show on the new all-sports station.

Meanwhile, TSN 1040 appears to have secured most of their top talent, with Don Taylor, Matt Sekeres, Blake Price, and Dave Pratt announcing that they’re staying with the station in recent weeks.