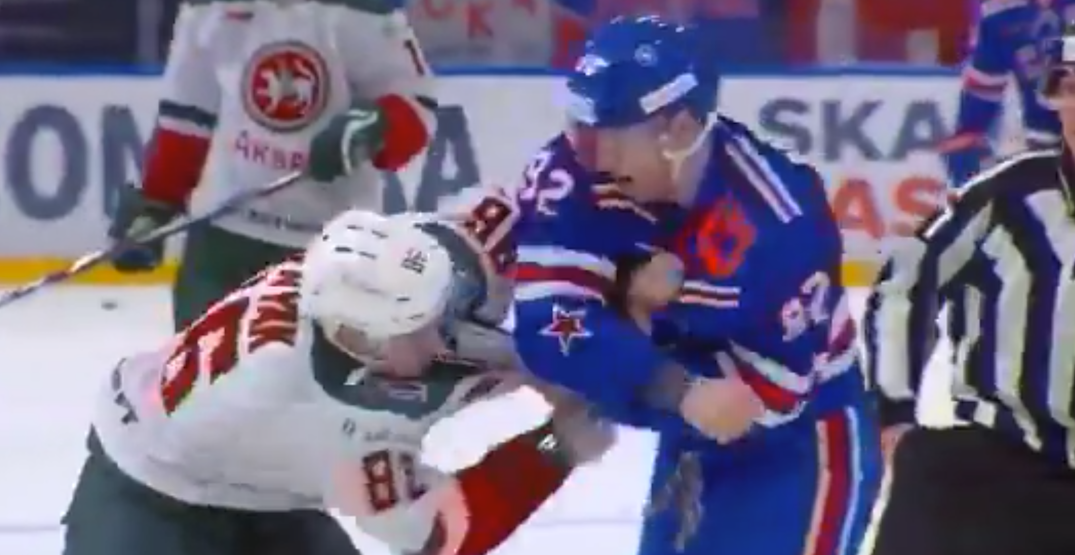 The 19-year-old Russian, who plays for SKA St. Petersburg, dropped the gloves in today’s game with Nikita Dynyak.

A willing combatant, Podkolzin dropped the gloves after he was being pinned by Dynyak on the side boards. The Canucks first-rounder wasn’t afraid to throw a few haymakers, though he didn’t appear to land any cleanly. He did get the takedown though.

This is the second fighting major in 43 career KHL games over the last three seasons for Podkolzin, who doesn’t get a lot of penalties otherwise — he has just two minor penalties during that same span.

Podkolzin might develop into the power forward Canucks fans have been yearning for — though they’ve been let down before. Zack Kassian didn’t pan out in Vancouver and while Jake Virtanen scored 18 goals this season, he hasn’t been a menace to other teams to the degree that many would like.

It should be said that Podkolzin hasn’t scored as much as many would like, though he hasn’t been given much of a chance by his coach. That appears to be the norm for teenagers in the KHL, but it still must be frustrating for Podkolzin and the Canucks.

Podkolzin played a KHL career-high 17:29 on Wednesday, helped by the fact that more than half of his usual teammates missed the game due to contracting COVID-19.

Yes, they do things a little bit different in Russia.

Vasili Podkolzin with another scoring chance.

We should get a better idea of how Podkolzin has progressed as a player this December, when he’s expected to suit up for Russia at the World Juniors in Edmonton.

The 6-foot-1, 192-pound winger is a two-way forward, complete with skill, toughness, and playmaking ability. He scored five points in seven games for Russia at the last World Juniors as an 18-year-old, and will be counted on even more by his country this winter.