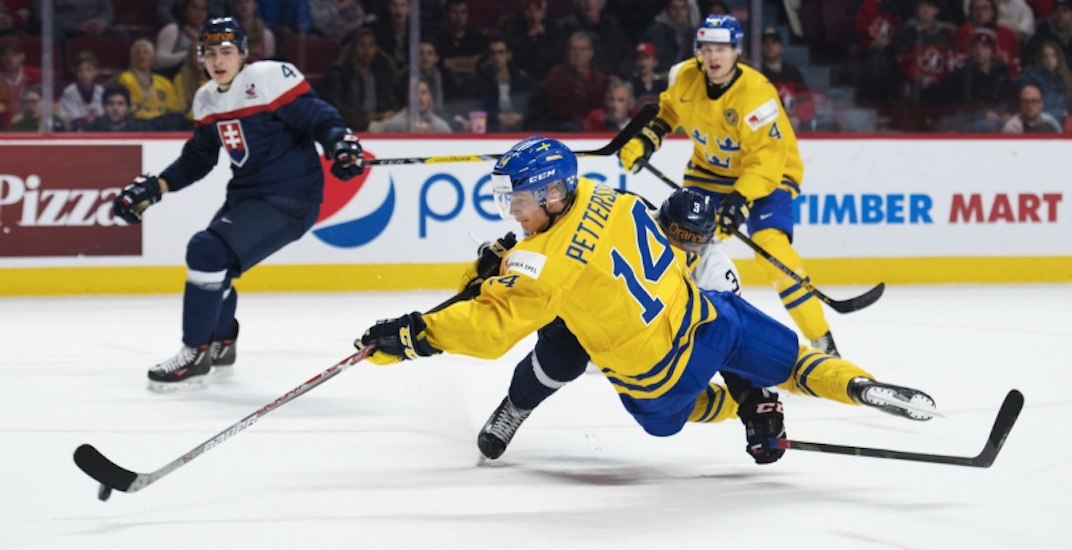 That’s unfortunate for Canucks prospect Elias Pettersson, because he picked up an injury at the World Junior Summer Showcase in Plymouth, Michigan on Sunday.

The fifth overall selection last June at the NHL Draft is playing for Team Sweden at the summer tournament that also includes teams from USA, Canada, and Finland.

Per Sweden's coach Monten, Elias Pettersson (VAN) aggravated a previous injury. He will be reevaluated tomorrow.

Pettersson appeared to be injured after taking a hit late in the second period. He didn’t return for the third period, reportedly reaggravating a previous injury.

It appears as though Pettersson was banged up after making a pass out of his own end (the camera just misses it):

Luckily, it appears that Pettersson is going to be ok. He was present at practice on Monday and is likely going to play on Wednesday. That’s good news for the Canucks, who have a lot riding on the development of their prized prospect.

You have to wonder if NHL teams cringe watching these summer games.

Is it really necessary to have a high-paced tournament in the middle of the summer to evaluate players for the World Juniors, which won’t take place for another five months? Is putting extra wear and tear on these players really worth it? Would it not make sense to have players putting on muscle mass with off-ice training in the summer, not to mention giving these youngsters a mental break?

But I’m not a doctor.

Imagine what it’s like to be prospect Michael DiPietro, the goaltender who won a Memorial Cup with the Windsor Spitfires on May 28. Less than a month later, he was drafted by the Canucks (June 24) in Chicago, before being whisked away to development camp in Vancouver (July 4-6). He had just over three weeks off before heading to Plymouth for a week-long competition for the World Junior Summer Showcase. In just over a month, he’ll be competing at a high level at the Young Stars prospects tournament in Penticton.

Unlike many of his peers in the organization, Pettersson isn’t scheduled to play at Young Stars for the Canucks, as he’ll be busy with his Vaxjo, his new team in the top professional league in Sweden.

Three Canucks draft picks from last June – Kole Lind, Jonah Gadjovich, and DiPietro – are playing in Plymouth and are expected to also be at Young Stars in September, alongside notable names like Brock Boeser, Olli Juolevi, Jonathan Dahlen, and Thatcher Demko.