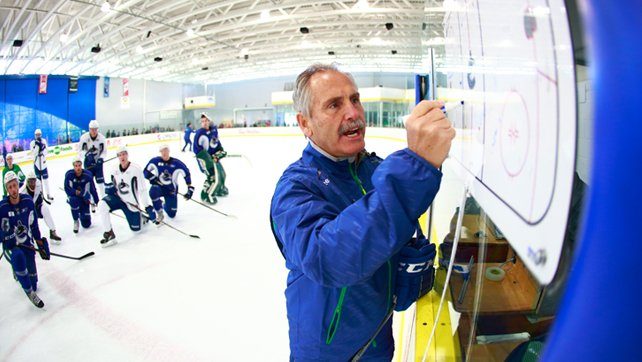 The Canucks wrapped up training camp in Whistler earlier today.

Let’s take a look at some of the notable names from the four-day camp.

Philip Larsen was acquired at the trade deadline last year from the Edmonton Oilers with hopes of helping the Canucks power play. Since Larsen was playing in the KHL last season, this was the first look at Larsen in Canucks colours, and it was clear that he has the mobility and puck-moving abilities to help out.

He just may not be the saviour that everyone is hoping for.

“There’s some pressure on me there; but I am not thinking about being a saviour,” Larsen joked. “The two twins are on the power play, they are probably two of the best in the world. If I get a chance on the power play, I am going to see if I can help the best of I can.”

Alex Edler has been the primary defenceman on the power play the last few years, but adding Larsen to the mix will give the man advantage a different look. If he doesn’t gel with the Sedins, then it’s safe to assume he can at the very least give a boost to the second unit. At the very least, it gives the Canucks some options there over the course of the long season.

Defenceman Andrey Pedan looks to be extremely motivated to make the team this year. The Lithuanian defenceman is in the mix for a roster spot on the back-end, but he’ll likely need to beat out Alex Biega to secure a spot.

Pedan was competing throughout the entire camp, and scored a beauty during the scrimmage on Sunday:

Look for him to try and make an impact during the preseason, as he tries to set himself apart. Pedan is subject to waivers if he were to be assigned to the Utica Comets this year, and if he shows off his potential, it’s doubtful the Canucks will want to risk losing him.

The Canucks 2016 first round pick, Olli Juolevi, will never be regarded as a flashy player, rather he simply makes the right play nearly all of the time. A little chip here, a bank-pass there, or changing his lane to ensure the shot gets through is what his game is all about.

He will likely get assigned back to the OHL at some point during the preseason, but he is making the right impression on Canucks staff. Juolevi has been paired with Chris Tanev throughout the majority of camp, and GM Jim Benning confirmed during an interview on TSN 1040 this morning that Juolevi will get some preseason action.

Throughout Friday and Monday’s sessions, 2015 third round pick Guillaume Brisebois had some struggles. He was pulled aside by coaches Perry Pearn and Travis Green on separate occasions for 1-on-1 discussions.

The Green and Brisebois chat lasted for a few minutes on Monday. The main issue of contention seemed to be Brisebois’ battle level in drills.

Obviously Brisebois has a few years before becoming an NHL player, but a good work ethic is a very important thing to have when trying to take the next step.

It was announced today that the Canucks have assigned six players back to their respective CHL teams. The following players were re-assigned today: