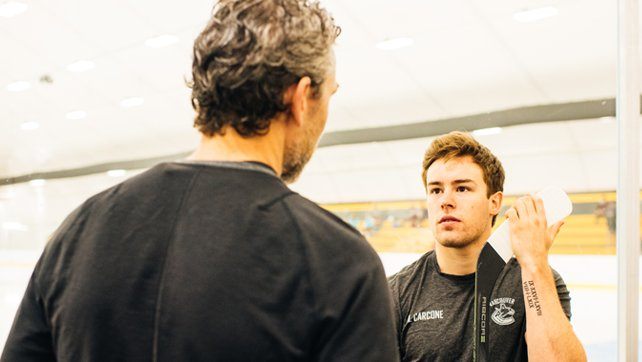 The Canucks’ newest prospect, Michael Carcone, took to the ice in his first NHL training camp on Friday, and he didn’t look out of place. During the first drill, goaltender Thatcher Demko was beat three times. Two of those were from Carcone.

The undrafted forward was an invite to Canucks development camp at Shawinigan Lake in July and made enough of an impression to earn himself an entry-level contract.

He showed some serious offensive chops in junior, posting 47 goals and 42 assists in his final QMJHL season, beating his previous career-high of 41 points.

“It’s just about being healthy,” Carcone told Daily Hive. “My first year, I had a few injuries including two concussions and a broken thumb. Being more confident and having a full season to play definitely helped.”

Given that, it’s understandable why he went undrafted. During his first year of eligibility, he was playing in the Ontario Junior Hockey League. His draft-plus-one year was his 41-point season.

The 5-foot-10, 170-pound forward then experienced an explosion in offence during his draft-plus-two year. Unfortunately, it wasn’t enough to get noticed and be selected, but the Canucks came calling immediately afterwards for an invite to development camp. Carcone revealed that the Canucks weren’t the only team that had invited him.

He chose to attend the Canucks development camp because of the opportunity that was there for him.

“I felt very comfortable here in BC, it’s somewhere I wanted to be. They have a lot of young spots to fill, and needed some scoring. I felt I could come in and help there,” said Carcone.

Last weekend, Carcone was one of the best forwards for the Canucks Young Stars roster. He scored on an end-to-end play that was a thing of beauty. He took the puck from behind the Canucks net, gathered speed, passed to Cole Cassels on the half boards, took the return pass and then ripped it top corner. The puck was in and out so quickly that the goalie didn’t see it go in.

Throughout Friday morning’s session, Carcone showed an innate ability to hold on to the puck and protect it from defenders.

There’s little doubt that Carcone will be a huge addition for the Utica Comets this season on the offensive side of the game, but he also understands that he will need to round out his game to make it at the next level. Those little plays that he was making during Young Stars and Friday at Training Camp are excellent indicators that he understands what it takes at the professional level.

There are things at the junior level that you can’t do and that you need to be a 200-foot player to make it.

“The play is faster, so your decisions all the time have to be very quick,” Carcone said about his transition to the AHL level. “In junior, you’re going through the motions a bit. At the next level you have to prepared mentally and physically. As long as you focus on those things, you got it.”

Carcone’s hockey sense is one of his greatest strengths and he uses that to avoid getting himself into situations where his smaller size may hinder him.

The Canucks may have found something here – we will just have to see what it is.