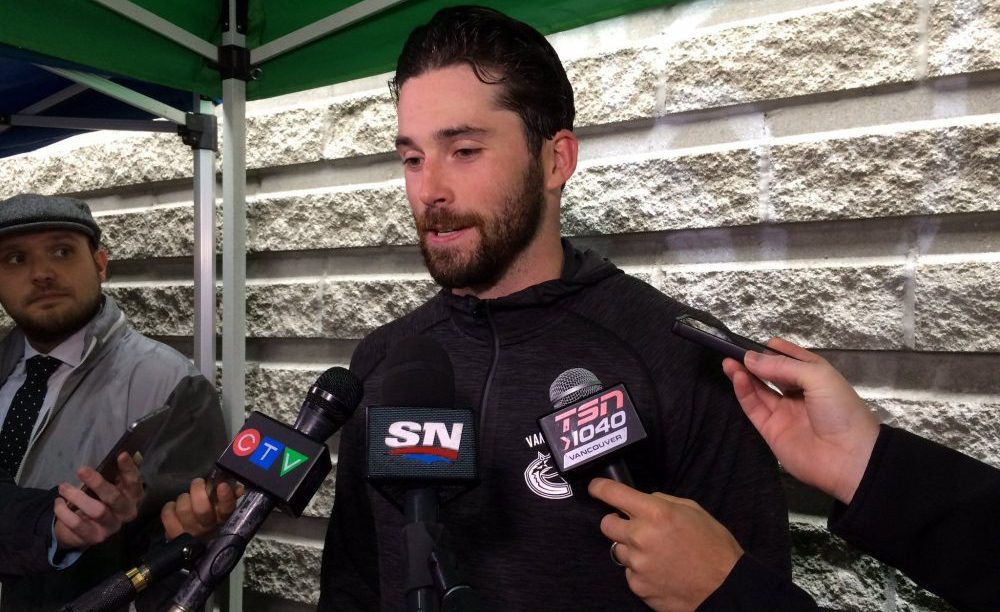 The two immediately got to work figuring each other out, trying to get on the same page for the season ahead.

Multiple times during the session, Hutton and Gudbranson would complete a drill and then huddle together. Assistant coach Perry Pearn would join for the first bit and then peel away, it was clear that this was a meeting of players looking to get comfortable with each other.

“Just getting to know each other, just getting on the ice together is the biggest thing,” said Gudbranson shortly after practice broke off. “If there’s something that I can help out with, something that was taught to me at a younger age, I’ll tell him. He started doing those things towards the end of practice, which is an exciting thing.”

A lot of the Canucks’ success this season will depend on this pairing. Last season Vancouver had serious issues on the back-end, being unable to generate offence through transition as well preventing the puck from going into their own net.

Gudbranson was acquired with the thought of pairing him with sophomore Ben Hutton. Gudbranson plays more of a defensive game, and thus by putting him with Hutton, it should allow Hutton to have free reign to create offence.

It’s interesting to see how much they were talking, gesturing, and breaking down what they were doing on the ice. It’s a smart move by the Canucks coaching staff to place them together right away. To let that chemistry start from day one, and then build on it every single practice and game.

For Gudbranson, he understands his own game. He knows what he brings to the table. He possesses a hard shot, defensive acumen, and a mean streak.

“I would stick up for him immediately,” Gudbranson said when asked what he would do if someone took a run at Hutton. “That’s my D partner. If someone runs him, they are going to have to deal with me.”

Gudbranson knows there is some room to grow in his game, notably adding more offence.

“I bring a heavy shot, I am not going to be the guy that brings the puck up the ice or making those plays,” he told Daily Hive at the prospect of getting time on the power play. “But if you put me in the right spot with the right shot, I’d like to be a shooter.”

“I have the same shot as Shea Weber, probably not as hot, but it’s pretty heavy and if I do get that opportunity on the power play. I am going to be putting pucks on net and see what happens.”

Comparing your slap shot to Shea Weber seems a little lofty, but it’s clear that Gudbranson is ready to take it all in and round-out his game. He wants the opportunity to be a complete player and help the team win.

If Hutton and Gudbranson can get on the same page in the early going, their play may go a long way towards getting more wins this season.