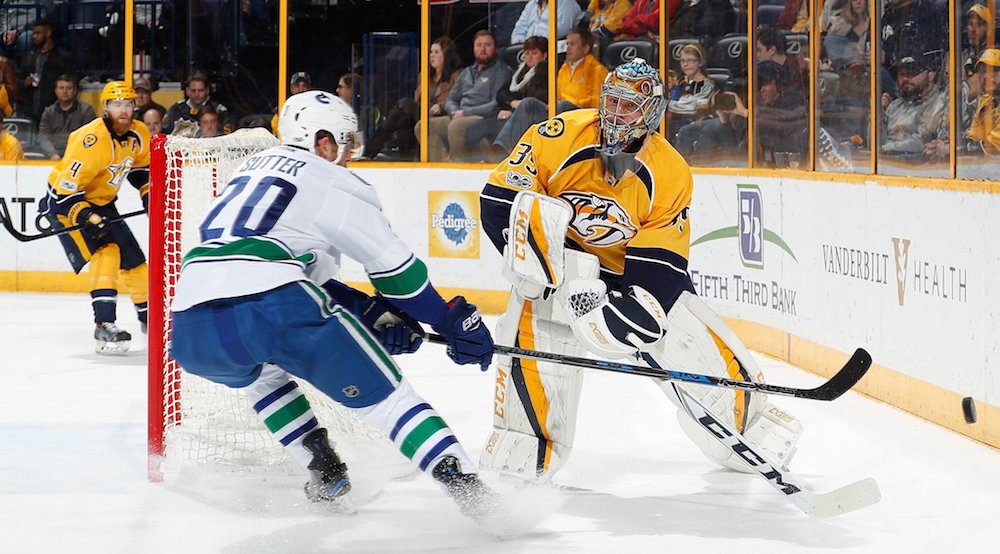 I’ve watched a lot of Canucks games in my life, and that was… Well, that was one of them.

After discouraging fans from watching the rest of the game with a four-shot performance in the first period, the Canucks slowly crept back into this game, before eventually overtaking Nashville in shots on goal, and tying the game up late.

Vancouver was lucky, as a couple of close calls went their way. First, a disallowed Predators goal because of a Filip Forsberg high stick. Roman Josi also had a goal called back in overtime, when Viktor Arvidsson bumped Ryan Miller on the edge of the goal crease.

The only goal of the game, until late, was a fortuitous bounce for Nashville, as Mike Fisher’s point shot missed the net and bounced right to Austin Watson, who scored in a gaping net.

Brandon Sutter scored late for the Canucks, but Nashville secured the 2-1 overtime win when Calle Jarnkrok finished off a rare 2-on-0 shorthanded breakaway.

The silver lining? Tonight’s loser point improves (can we say that in a loss?) Vancouver’s dreadful road record to 5-13-2.

Another silver lining? The point puts the Canucks in a tie with the LA Kings for the last playoff spot in the West.

It’s been a bit of a running joke for the regular writers of the SixPack, Omar and Wyatt, that whenever I’m writing it, I get some great material.

I don’t write them often.

The last SixPack I wrote: the meltdown in Carolina on December 13th. The one before that: the brouhaha against the Leafs on November 5th.

So, with the night off tonight, it made perfect sense for the SixPack Godfather to make a bold prediction:

Prediction: tonight's #canucks game against the #preds is going to be 🔥 🔥 because third-string @RobTheHockeyGuy is in for the SixPack

6 #Canucks shots. 5 from Dmen. Skille the lone forward to register a shot on goal so far

Jeff’s tweet was from midway through the second period.

This game is so boring.#Canucks

Time to put the coffee on, otherwise I'm not making it through the rest of this game. #Canucks

The advanced stats reflected that as well, with the Canucks catching up to the Preds by the end of the third period. 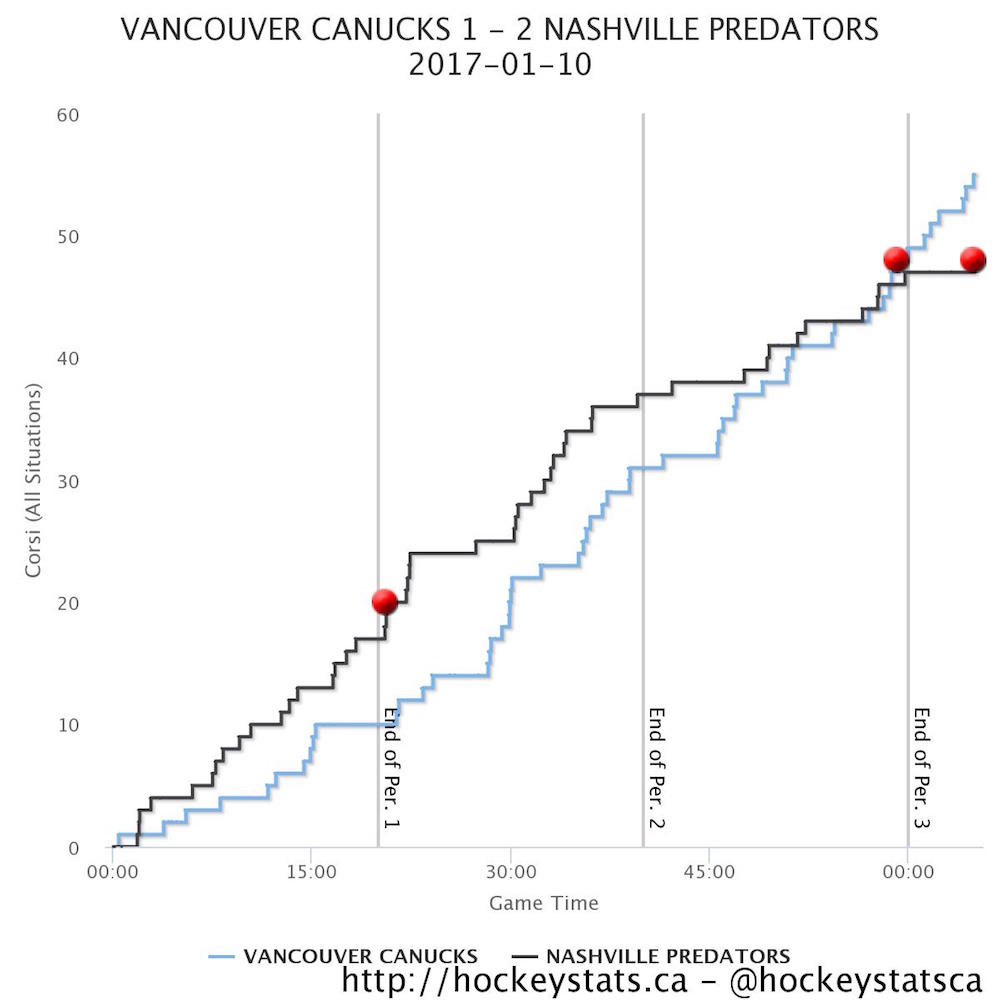 Still, it’s not like this was an epic 1-0 game. For the most part, snoozefest. Until…

The SixPack needed a hero tonight. With time ticking down, and nothing more than a couple nice Jack Skille chances on goal to get excited about (I thought the fourth line had a good night tonight by the way), I was starting to sweat.

But that’s when Brandon Sutter tied up the game, and saved the SixPack.

Sutter made a nice move, toe-dragging the puck to change the angle on Pekka Rinne, and stole a point for Vancouver.

What you don’t see in the gif above is the great play made by Alex Edler at centre ice, stripping the puck off Colton Sissons, to allow the Canucks to catch the Predators on a 3-on-2 in transition.

Great play Edler to close down puck carrier right away with extra attacker & create turnover. #Canucks have been too passive with extra man

What you also don’t see is the Sedins, Loui Eriksson or Bo Horvat on the ice. They just finished a shift and Willie Desjardins didn’t call a timeout to rest them. That’s something he would have been criticized for if things didn’t go his way.

There were more than a few puzzling moments in overtime from where I sat.

Bo Horvat played a lot tonight, more than 20 minutes in fact. He often gets listed as the team’s third line centre, but make no mistake, he was deployed as a #1 at even strength tonight. He played 18:08 at even strength, more than Henrik (17:38) and Sutter (15:10).

But when overtime began, he was back to being the third line centre. Wouldn’t it make sense to start with your All-Star, your leading scorer, and your best offensive option (especially at 3-on-3), in overtime?

If that trio of young legs sounds like their best option to you, it’s probably because it is.

Horvat wouldn’t have seen the ice if not for a borderline disallowed goal on the first shift of OT.

With our luck we're lucky that wasn't a goal #Canucks

We all love the Sedins, but 3-on-3 overtime does not agree with their 36-year-old legs.

The Canucks appeared to be bailed out late in overtime, when they were awarded a power play. Of course, if you’ve watched this team perform with the extra man this season, you likely weren’t counting your chickens before they hatched.

The 4-on-3 power play, featuring the Sedins, Sutter, and Stecher, lacked imagination. Nobody is scared of shots from the outside from the Twins and Sutter doesn’t move around much in front. Troy Stecher was eager to shoot from the point – which I love – but without any sort of real threat from anywhere else, the play to the point was predictable, as evidenced by the amount of his one-timers that were blocked.

The last shot blocked was disastrous, as it led to a 2-on-0 breakaway the other way for the winning goal with two seconds left. Too bad, too, because Miller is an excellent shootout goalie, and it would have been advantage Vancouver in the skills competition.

Canucks fans have spent a lot of time crapping on everyone that has played with the Sedins this season.

If only Brandon Sutter was off their line. What the hell is Jayson Megna doing with them still?

Tonight, most of Canucks nation got their wish, with Loui Eriksson reunited with his fellow Swedes.

How well they did depends on your perception.

Henrik and Daniel were +5 in Corsi, while Eriksson was +4. Those are respectable, but not spectacular, numbers. They’re an improvement from when they were playing with Sutter and Megna, surely, but Eriksson finished the night without a shot on goal.

That simply can’t happen for a linemate of the Sedins.

Now, I’d like to blame Eriksson, but sooner or later, don’t we have to acknowledge that the Sedins are slowing down?

With all the love for Bo Horvat and his All-Star selection today – and it is warranted – we should acknowledge that he’s tied for 53rd in league scoring. His numbers are nice, but his team scoring lead has a lot to do with the Sedins’ poor production this season.

They really miss Jannik Hansen of course, but if we are to believe the Twins are really still close to their former level, shouldn’t the onus be on them to lift their linemate, and not the other way around?

No, it’s not their All-Star, Bo Horvat.

You can make a strong case that the Canucks’ most valuable player this season has been Chris Tanev… At least he has been when he’s in the lineup.

Tanev, the player who a friend of mine refers to as ‘old man Tanev’ because of his wisdom and calmness with the puck, will be forever underrated. Kevin Bieksa once said that it looked like he could play with a cigarette hanging out of his mouth.

There’s talk of trading him because of Vancouver’s depth on the blueline, but I’ve always thought that you’ll never get sufficient value in return because so much of what he does doesn’t show up in traditional stats.

The only concern with Tanev is his fearlessness. He’ll block any shot, take any hit, to make a play. He’s a warrior. It’s what you love about him, but it’s also something that’s going to catch up with him eventually.

Tanev missed last game and was likely playing at less than 100% tonight. He appeared to re-aggravate something at one point, but continued on.

The question going forward: do you sell high on Tanev – even if he’s still underrated – because you see his body likely to deteriorate at a quicker rate than most as he approaches 30?

Something to ponder, at least.

We’ve received great feedback ever since the debut of the Canucks supporters section on December 20th.

Well, good news, because our second game is all set. We’ll be at next week’s rematch against the Preds on Tuesday, January 17.

Incredibly, the demand has far exceeded the supply for these games.

The good news: the plan is for this to get bigger and better.