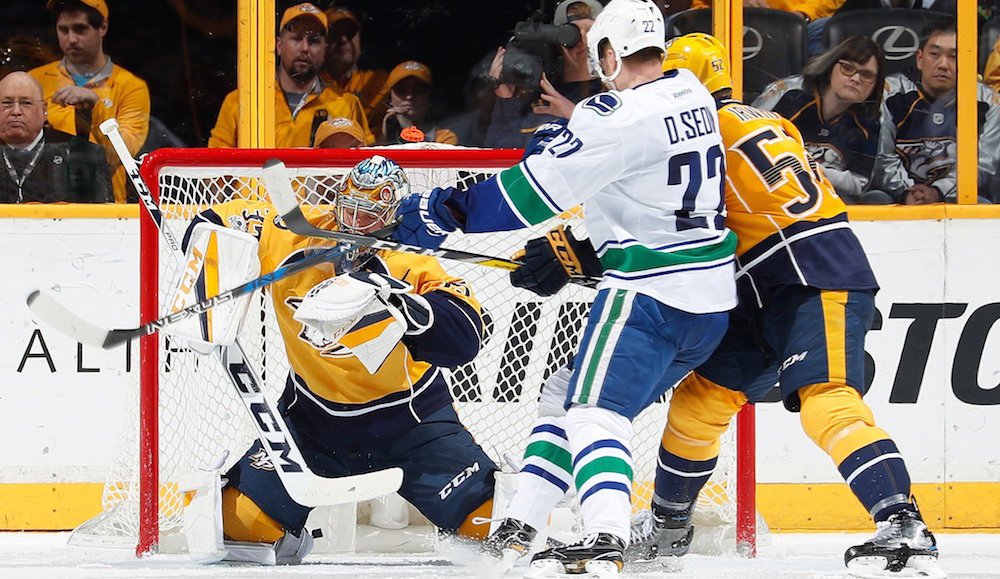 Vancouver was down 2-1 for most of the game, yet they thought it was more important to have balanced lines than one that could score.

That’s what they’d have if they had put Jannik Hansen with the Sedins.

That Hansen was their most potent forward through two periods was beyond doubt. He was a +7 Corsi through two. The next forwards were Alex Burrows and Markus Granlund at +1.

The couple shifts Hansen saw with the Sedins, they dominated the offensive end.

Their shifts without him? Some were not bad, some were bad. Often Loui Eriksson was the one messing up the cycle or losing the puck.

They lost 4-2, and we’ll talk of the hit on Sven Baertschi and the disallowed/re-allowed goal as the turning points, but if you ask me the turning point was Willie going with balance over scoring once again.

And as David Ebner points out – here we are again.

Playoffs? Vancouver Canucks barely ahead of where they were last year, at the bottom. Rebuilding on the fly – but no liftoff. pic.twitter.com/QDSGpYc4Po

Anytime there’s a headshot, it’s the story of the game. So unfortunately, we start with this.

This hit happened early in the first period. Notice how close the puck is to Baertschi in the gif.

Hope you weren’t holding your phone to your face scrutinizing the gif for the puck… (though I kind of hope you were) – it was a trick question.

The puck was nowhere close when Cody McLeod pummeled Baertschi to the ice. It was near the near boards in this picture. So yes, the hit was dirty as hell.

Blindside? Yes – though that doesn’t matter now? Principle point of contact the head? Yes, no doubt.

Suspension coming? You’re a Canucks fan – you know better than that.

Baertschi will not return tonight because of a concussion.

Maybe the league will send a get well soon card?

2. Getting the top line straight

Seeing Eriksson start with the Sedins, you had to wonder how long the leash was (knowing Willie, it has no end)…

@omarcanuck until the first shift

OK, so maybe you give Eriksson a period, see what he can do. Here he was on a couple offensive shifts with the Sedins in the first.

He’s coming in on the forecheck here, before losing the puck.

Here, Loui starts behind the net. You can see how his attempts to help the cycle and forecheck are not helping anyone.

My point? Hansen doesn’t lose those battles. He wins them, he gets the puck to the Sedins, he keeps the pressure going, and eventually they score.

JPat had a pretty great idea.

@omarcanuck maybe Hansen could just push Eriksson around the ice

Or have a microphone in his ear and direct him where to go?

#Canucks best shifts in this period all with 36 on the ice. With a variety of linemates

As I wrote above, Hansen was great.

Now, with your top line needing a spark, and your second line of Horvat+Burrows doing just fine on their own for weeks (Baertschi was injured early in the first) – why waste the spark plug?

Some things are just blatantly obvious.

I mean unless you don’t want goals.

Here’s the goal that sealed the game for the Preds in the third. At the time it was 2-1 Nashville and the goal was waived off as you couldn’t see it enter the net.

Then we were subjected to another lengthy video review…

From that angle you had no idea if the puck crossed the line or not.

PPP had a closer shot.

This was just ruled no goal in Nashville against Vancouver. What do you think? Looks over the line to me. pic.twitter.com/ebMTmXZc2Y

Ref: The puck crossed the line. We have a good goal.

Best part of this goal – Willie’s reaction. Thought you were used to his twitching? Think again.

While there weren’t a lot of great moments in the game, we caught a couple.

Check out Stecher’s save here.

And I could watch Hutton stickhandle like this all day.

Other than Stecher and Hutton, Vancouver’s defencemen don’t have the hands and guts to try stuff like this.

Plus he’s got this smile… 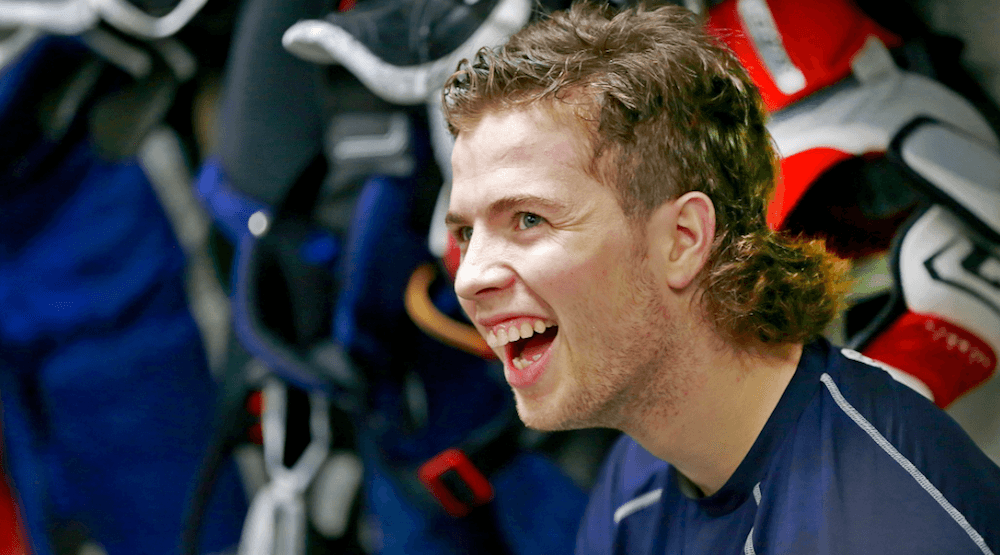 Was Jacob Markstrom solid on it? No.

Want to cool down a goalie who was playing well in December? That’ll do it.

Strangely enough, as the game wore on, Marky got better.

Markstrom seems to be getting better as the game goes on… Almost like playing hockey helps… pic.twitter.com/IJjEbLrKJf

Funny how that works isn’t it?

Also funny – even when the Canucks have a plan – like they did for Markstrom to be Miller’s successor – they can’t seem to get it right.

How can he be? No one knows if he’s ready. If the Canucks miss the playoffs, they’ll have wasted a valuable opportunity to develop Markstrom into a starter.

And what will they have gained?

Until this point of the season, Jim Benning has stuck to his guns on not wanting to trade players with NTCs.

Then yesterday, he said this regarding Hansen’s and Burrows’ future to Ben Kuzma.

I’ll have individual conversations with those players and their agents, but we’re hoping we can stay in the (playoff) fight. But it’s a tough trip.”

While those weren’t incredibly strong comments, Burrows’ were.

“I think with the Canadian media, it (no-waive NTCs) was just to take you guys off his (Benning’s) back a bit to calm the storm down instead of being asked about it every day or every week.”

Now, despite Dave Pratt and the morning show playing it as if this last quote was from Benning himself, it wasn’t. Still, the GM did say he’ll “have conversations” with the agents.

So who might take Burr off the Canucks hands?

The Montreal Canadiens are leading the Atlantic Division and want to add a centre and bottom-six help. They had a scout at Rogers Arena on Saturday and if the bottom falls out on this trip, the prospect of roster change becomes more of a possibility.

From talking to some people, I get the feeling a lot of Canucks fans wouldn’t mind seeing Burr have that shot. They’d get to cheer on one of their long-time favourites as he goes after a Cup – more excitement than they’ve felt for the Canucks in years.

With the NHL’s trade deadline three weeks and one day away, here’s something I don’t like hearing:

“The Canucks will also conduct their pro-scouting meetings next week in Pittsburgh and asset management should be the focus.”

That line is from the same Kuzma article above and it’s something both Linden and Benning said on the radio last week.

The reason I don’t like hearing it? Trade deadline is THREE WEEKS AWAY.

Recall last year’s trade deadline – a month ahead of it, we heard about the upcoming pro-scout meetings where they’d make decisions on what do to at the deadline.

Meanwhile other teams, such as the Maple Leafs, were getting a head start on the trades.

Really, if you’re the Canucks, you should not be waiting to make your plan. It should’ve been in place before the season began. And the cutoff for deciding if you’re a seller or a buyer shouldn’t be days before the trade deadline – it should be at least five or six weeks.

You didn’t have to be a rocket scientist to look at this February schedule and see it wouldn’t push them up in the standings, after all.

Instead, they’ll meet with scouts in a week, decide their direction, and rush to get things done from there.

You know what? Maybe I’m just being a downer and they’ll win out their games before March 1 and go into the playoffs as the hottest team in the NHL.

Yeah, let’s just go with that.