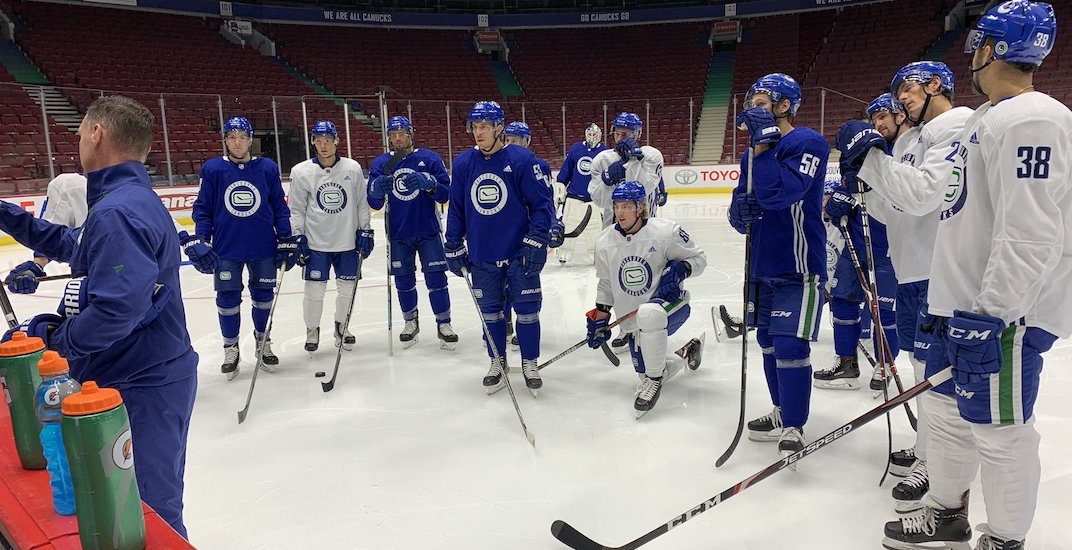 The Vancouver Canucks worked on the power play at Friday’s practice for the first time this season.

With a number of offseason additions, head coach Travis Green appears interested in throwing some new looks at the opposition.

Green previously said he “held back” on power play work during training camp while Brock Boeser was out — for obvious reasons.

Boeser, along with Elias Pettersson and Josh Leivo, were the three PP1 incumbents on the first unit at practice on Friday. They were joined by rookie Quinn Hughes and newcomer JT Miller.

Hughes is taking Alex Edler’s longtime spot on the point, while Miller is the new net-front man, a position previously held by Bo Horvat.

Horvat and Edler were bumped to what should be a drastically improved the second unit — with Horvat playing the half wall where he can show off his skill.

Towering defenceman Tyler Myers will set up his booming one-timer on the opposite side of the ice from Horvat, with Tanner Pearson in the net-front position. Nikolay Goldobin and Sven Baertschi alternated in the bumper spot.

#Canucks PP1 setup: Pettersson and Boeser on their one-timer sides on the flanks, Leivo bumper, Hughes up top and J.T. Miller net front.

PP2 setup: Myers and Horvat on the flanks (one-timer side), Goldobin/Baertschi bumper, Edler up top and Pearson net front.

Micheal Ferland, who scored 13 power play points last season but missed practice due to an illness, could also factor into one of the units.

A good power play is often the key to success in the National Hockey League. Last season, 16 of the top 17 teams with the man advantage made the playoffs, with 14th-ranked Montreal Canadiens power play being the lone exception.

The Canucks finished 22nd on the power play last season, operating at 17.1%, which was actually the best the team has performed with the man advantage in years. The Canucks finished between 26th and 29th from 2015 to 2018. The last time Vancouver cracked the top 10 was also the last time they made the playoffs, when the Sedins and Radim Vrbata ran the show in 2014-15.

The second unit struggled all season in 2018-19, and the top unit never seemed to find the magic that some expected with Pettersson joining forces with Boeser for dual one-timer threats.

The hope is that Hughes’ mobility and playmaking presents more opportunities for Boeser to his left, and Pettersson to his right. Miller scored 20 power play points with Tampa Bay last season, which would have ranked him second on the Canucks.

“Obviously a lot of good players on the unit, we should have a lot of success together,” Hughes told reporters after practice. “It’s pretty easy for me just to distribute and do my thing.”

The Canucks have reached the halfway point of the preseason, getting their third win in four games when they put the boots to the Edmonton Oilers on Thursday — winning the game 6-1. Boeser is expected to make his debut Saturday in Salt Lake City, against the Los Angeles Kings.