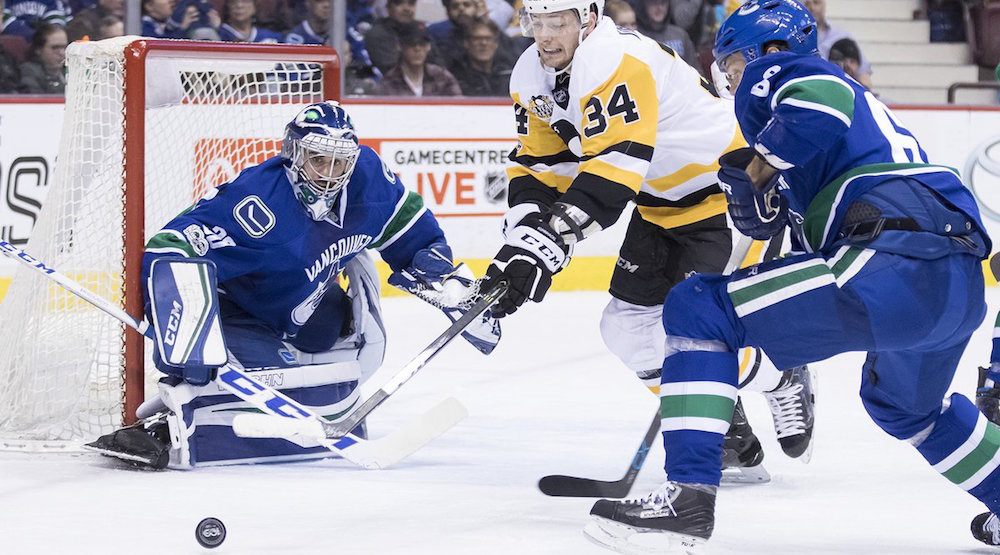 Somebody owes Ryan Miller a beer. A few beers, actually.

He doesn’t need a change-up though. Miller was on the top of his game in this one.

Despite the final score reading 3-0, most of the game was played either scoreless or at 1-0. For 57 minutes, Miller wouldn’t let the Penguins pull away.

Give the Canucks skaters some credit too (emphasis on some), they had some good moments. Playing against arguably the best team in the league and without several regulars in the lineup, at times the Canucks kept pace.

At other times though, it looked like Miller was the only Canuck with a pulse.

In the end, the Canucks allowed a season-high 48 shots against, got shut-out by the Penguins for the second time this season, and snapped their streak of four-straight games with at least one point.

Let’s dive into what happened in this one.

With Markus Granlund and Chris Tanev both out due to food poisoning, the Canucks depth took another couple hits. It was bad before, now it’s almost unrecognizable.

Seriously, who are these people?

Of the 12 forwards tonight, only five (Sedins, Horvat, Baertschi, Sutter) were expected to be on this team back in September.

The other seven players include two waiver pickups, four AHL forwards, and an AHL defenceman. Nifty.

Obviously injuries have played a huge part in that. Heck, the list of injured Canucks is almost as long as the healthy ones right now.

Now add in the departed Alex Burrows and Jannik Hansen. That’s a lot of spots to fill, and not the most ideal bodies to fill them with.

At this pt Willie's just throwing any warm body that's not puking over the boards, so I guess we're not complaining abt deployment tonight

A matchup against the Penguins would be an uphill battle on any given night for the Canucks. With the currently assembled roster, pulling off the win tonight would be even less likely than Willie D playing Nikolay Goldobin in a third period.

But of course, what do the Canucks do? They come out and work their replacement level asses off. At least for the first 20 minutes they did.

Heck, you could make a case that Mike Chaput’s goal should have counted and the Canucks deserved a lead in this game.

This is the same team (a worse team right now, actually) that just barely managed a point against the Islanders, hanging with the defending Cup champs two days later.

Even if you’re a diehard advocate for Team Tank, you can’t help but admire the compete level this team has. Even if it does get them a few extra points than is best for their draft position, so what?

It’s far more important to have the young players in an environment where they’re developing good habits, giving maximum effort every night.

Tonight was beyond a mismatch on paper, but Miller plus hard work kept the Canucks in the thick of things for 57 minutes.

3. Miller is the anti-tank

Reality caught up with the Canucks in the middle period.

Come to think of it, it’s been Miller time a lot lately.

He’s stood on his head countless times this season, holding the Canucks in games they have no business being in.

I’d argue he’s been the Canucks MVP this season, even over Bo Horvat.

In the second period, the Penguins outshot the Canucks 23-7, and could’ve easily had three or four goals. Instead they scored one, an Ian Cole point shot with tons of traffic in front.

Love it or hate it, Miller is the anti-tank.

4. Another one waived off

Depending on how you view the Canucks at this point in the season, the events of tonight’s game were incredibly fortunate/unfortunate. If you’re Team Tank, you loved the Canucks having two goals waived off tonight.

If you’re not Team Tank, well, skip to the next section.

In the first period, Chaput appeared to score, but the goal was called back after a coach’s challenge revealed goalie interference.

The Canucks got another puck past Matt Murray in the third, but a high stick from Sven Baertschi had this one called back as well.

Another goal waived off for #Canucks

Though the Canucks generated some decent chances in the first and third periods, they couldn’t beat Murray with a legal goal. He now has two shutouts in two career starts against Vancouver.

The Canucks goalie was so good in this game, he deserves another section.

Here he robs Sidney Crosby streaking down the wing.

Then he denies Phil Kessel on a shot labelled for the top corner.

Then a breakaway save on Conor Sheary. All in a two minute span.

The Penguins would score with just over three minutes remaining to ice the game, but in those first 57 minutes Miller had more saves than an episode of Extreme Couponing.

6. For Boeser or worse

Talks have been heating up surrounding Brock Boeser signing with the Canucks once his season with North Dakota ends soon.

Elliotte said Boeser's preference is to play in the NHL and not the AHL after his season is done.

The Canucks first-round pick in 2015 would give fans something else to get excited about while the team plays out the rest of their schedule.

While bringing Boeser into the fold now would burn a year off his entry-level contract, it would be worth it to get him some valuable pro experience in these meaningless end of season games.

We're going to lose, but damnit why can't we play young fast exciting hockey while we do it? Goldobin, Boucher, hell even Boeser #Canucks

The only question would be whether or not Willie Desjardins could manage giving more ice time to a young player who must first “understand the system.” It’s complicated, apparently.

With Goldobin already struggling to receive quality minutes in his first few games with the Canucks, you honestly have to wonder if Willie would be willing to spare a few of Megna’s hard-earned minutes to some of the younger guys.