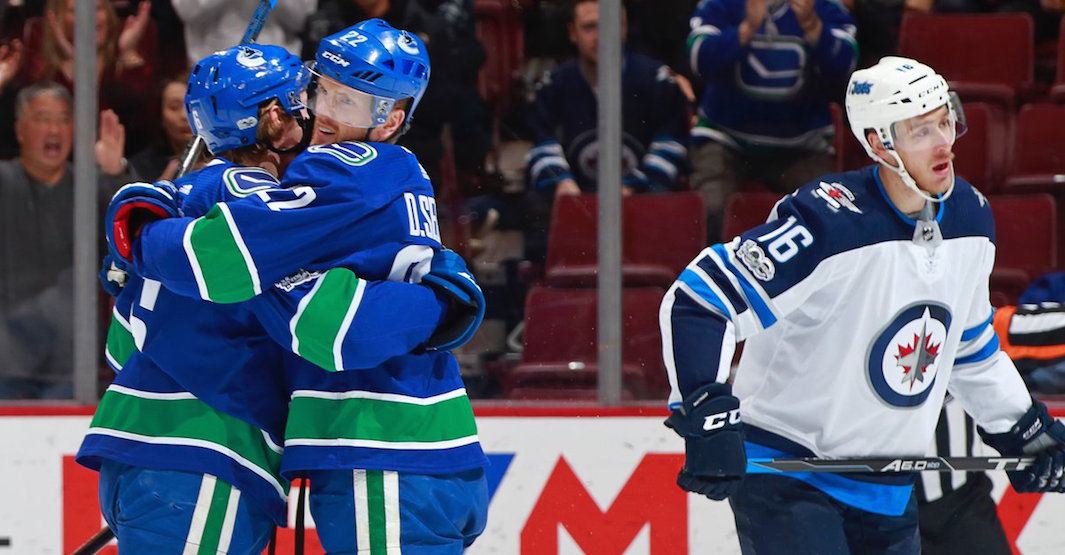 It’s a good thing Brock Boeser was in the lineup for the Canucks on Thursday.

The long-awaited season debut for Boeser came against the Winnipeg Jets. It took him about seven and a half minutes to hit the scoresheet. But he was also a -2, so don’t assume he’s a lock to stay in the lineup moving forward.

Besides the first and last 10 minutes of the game, the Canucks were pretty boring to watch in this one. Bo Horvat had some nice plays, but that’s like reporting that water is wet. Of course Horvat made some nice plays.

The Canucks played boring, but they didn’t necessarily play bad. They outshot the Jets 32-19, and had some good chances to tie the game late before eventually surrendering an empty netter in a 4-2 loss.

The Canucks looked good on the power play, and Jacob Markstrom had another solid outing despite his poor statline.

Yes, Boeser finally played, and it didn’t take him long to get on the scoresheet.

Not sure what Winnipeg’s PK unit was doing leaving him so wide open, but let’s just admire the nice shot.

It was a bit surprising that Green gave Boeser so many minutes. He was fifth among Canucks forwards in ice time. His 16:31 TOI was behind only the Sedins, Horvat, and Sven Baertschi. He finished the night with one assist, two shots and one hit, with a -2 rating.

Jake ‘other young gun’ Virtanen was in the lineup again (Alexander Burmistrov sat out), but he barely played. You’d think he’s in Green’s doghouse with the minutes he’s been getting.

Here are Virtanen’s ice times through three games this season:

Tonight, Virtanen played a full four and a half minutes less than the next lowest Canucks forward – Derek Dorsett. I think he had one shift in the third.

It doesn’t really make sense considering he’s been one of the better Canucks forwards out there. Is he really that much worse than Dorsett and Eriksson? My eyes say no.

If you were wondering how long the Canucks would last without an injury, you got your answer on Thursday.

And of course, it’s to their top pairing d-man.

For once it’s not Chris Tanev, which of course means it’s Alex Edler.

It was on a pretty harmless-looking play, but Edler left the game early and was quickly ruled out for the rest of the game. He’ll be reevaluated on Friday.

Chris Tanev now leads the Canucks in goals. Not sure if that has ever happened before, nor if it will ever happen again, but I’m loving it right now.

He scored his second of the season tonight, tying him for the team lead with Horvat. While his first goal of the season was a well-placed shot upstairs, Tanev outdid himself tonight with a knuckle puck that curved into the top corner of the net. Calculated.

That moment when Tanev discovers how to curl his muffins pic.twitter.com/nsNc8m9xRS

Tanev’s already matched his goal total from last season, and is on pace for 54 goals!

5. Marky holding it down

It’s still early – like, three games into the season early – but so far Jacob Markstrom is showing he has what it takes to string some solid games together.

Last season, he didn’t get much action and he never seemed to find a groove.

This year, Markstrom has looked good in all three games.

Forget the statline, he was good again on Thursday.

He allowed three goals on 19 shots. The first bounced off his own defender, the next was a nice shot from Tyler Myers off a 2-on-1, and the last was from one of the best snipers in the league, and he was screened. Hard to blame him on any of those.

He came up with a few huge saves again too.

Jets move the puck around the zone before finding Nikolaj Ehlers on the doorstep for a one-timer, but Jacob Markstrom flashes the glove🔥🔥🔥 pic.twitter.com/hRKWwhuUCd

I’ll be totally honest, I wasn’t prepared for a SixPack Superstar tonight. Blame me for not doing my homework, or blame Omar, for trying new things. New things are hard.

Anyways, we’ll give it to Jake Virtanen for this one. Not only because he got the shaft again tonight in terms of ice time, but also because he probably made this kid’s night, before it even began.