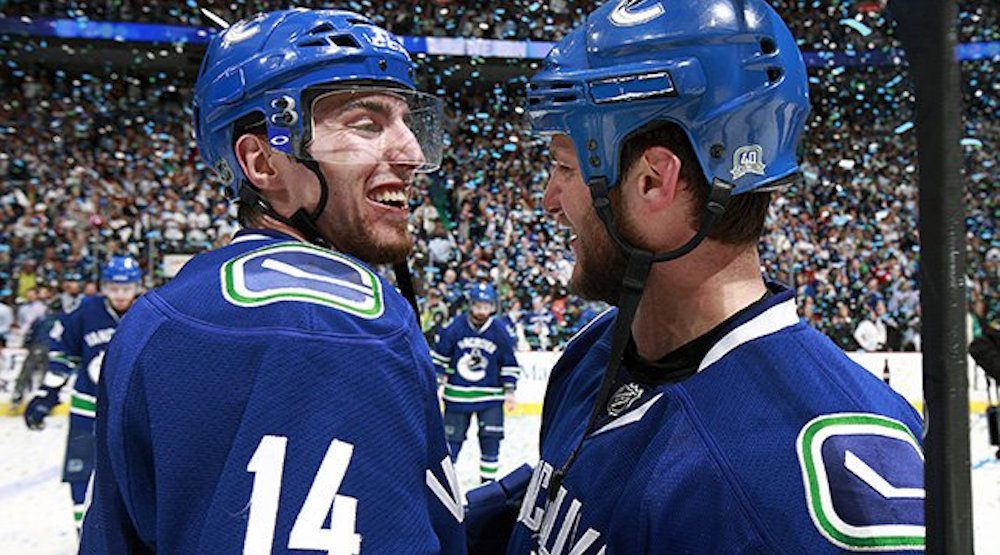 Alex Burrows returned to a hero’s welcome on Tuesday.

A heart and soul player for the Canucks for 12 seasons, Burrows quite clearly had a strong connection with the fans in Vancouver. He received a standing ovation after a tribute video was shown on the big screen.

It was the type of ovation you don’t often see when a non-star player comes back to play against their former team. But Burrows is special.

His rags to riches story is well known. So were his defining moments with the team, which includes one of the biggest goals in franchise history, the overtime winner in Game 7 against the Blackhawks in 2011.

He slayed the dragon.

But did you know how close Vancouver was to never experiencing peak-Burrows?

Former Canucks assistant general manager spilled the beans on Wednesday, during his weekly two-hour cameo with Matt Sekeres and Blake Price on TSN 1040 (listen to the full segment here). Gilman, by the way, has been must-listen radio ever since he began this regular segment with TSN 1040 last month.

Gilman told a few great Burrows stories from back in the day, but the most intriguing one was about how they almost traded him.

Burrows was in the midst of a breakout season in 2008-09. It was also a contract year.

With the trade deadline looming, Burrows was unsigned for the next season and was scheduled to become an unrestricted free agent. The Canucks didn’t want to lose him for nothing.

“We were operating on two tracks,” Gilman said on TSN 1040. “On one track, I was negotiating the contract, or acting as the point person with his agent, Paul Corbeil, and at the same time we were looking at what we were going to do at the trade deadline. And Alex’s name was coming up.”

Gilman explained that teams were asking about the former ball hockey star, but the Canucks were also shopping Burrows in case they couldn’t come to an agreement on a contract.

You can understand why finding an appropriate number for Burrows was difficult at the time. Just weeks before his 28th birthday, the former ECHL player’s previous career high was 12 goals.

Now, after finding a home on a line with Henrik and Daniel Sedin, Burrows had 16 goals and 33 points in 62 games.

Was he still a third-liner that simply got hot for a few weeks? Could anyone score with such frequency if given an opportunity to play with the Sedins?

“(Burrows’ agent) felt without a doubt that Alex Burrows was worth north of three million dollars,” he said. “We just weren’t prepared to make that quantum leap on a long-term deal.”

Still unable to agree to a contract, the Canucks kept talking to other teams until eventually, they found an intriguing trade possibility.

“It got to the day before the trade deadline and we hit on a deal where a general manager called Mike (Gillis) and said ‘I want Alex Burrows and I’m prepared to give you a first round draft pick and a player.'”

Gilman said the player, who he didn’t want to name, was a bonafide third liner at the time.

Gillis and Gilman had a decision to make. So they gave Burrows an ultimatum.

“I called the agent and said ‘you have to make your mind up,'” Gilman explained. “What I told him was: ‘We have a deal to trade him. And you’re either accepting this contract – eight million over four years – or we’re moving him.'”

Burrows’ agent asked to speak to Gillis, who stood firm. When the agent tried to delay by saying that he couldn’t make a deal because Burrows was taking his pre-game nap, Gilman recounts that Gillis said: “Get him up. We’re either signing the contract or we’re trading him.”

Not long after, the agent called back, and they accepted the deal.

Gilman was convinced that Burrows’ agent told him he would earn more money if he waited until after the season when he became a free agent. As it turned out, he was absolutely right.

After agreeing to the four-year, $8 million contract, Burrows went out that night and scored two goals, helping the Canucks to a 4-2 win over Minnesota. He was named the game’s first star.

After the game, Burrows and his wife cracked open a bottle of champagne with Canucks management in the executive office. Gilman says it was the only time they did that with a player.

As it turned out, Burrows’ contract was a steal of a deal for the Canucks. His production wasn’t a blip on the radar.

Burrows went on to score 12 goals and 18 points in the final 20 games of the regular season in 2008-09, helping the Canucks to finish first in the Northwest Division. The next season, he scored a career-best 35 goals.

Burrows ranks 14th all-time in Canucks history in points and ninth in goals. He’s third all-time in plus-minus, behind only the Sedins.

He’s sixth all-time in terms of games played. Every player ahead of him will eventually have their jersey retired by the team. Burrows is a shoe-in for the Ring of Honour.

Burrows is tied for 10th all-time among Canucks in playoff points. He’s tied with Greg Adams for first in playoff overtime goals, having scored three of them.

And of course he’s first in dragon-slaying goals.

Thank goodness we got to see it.