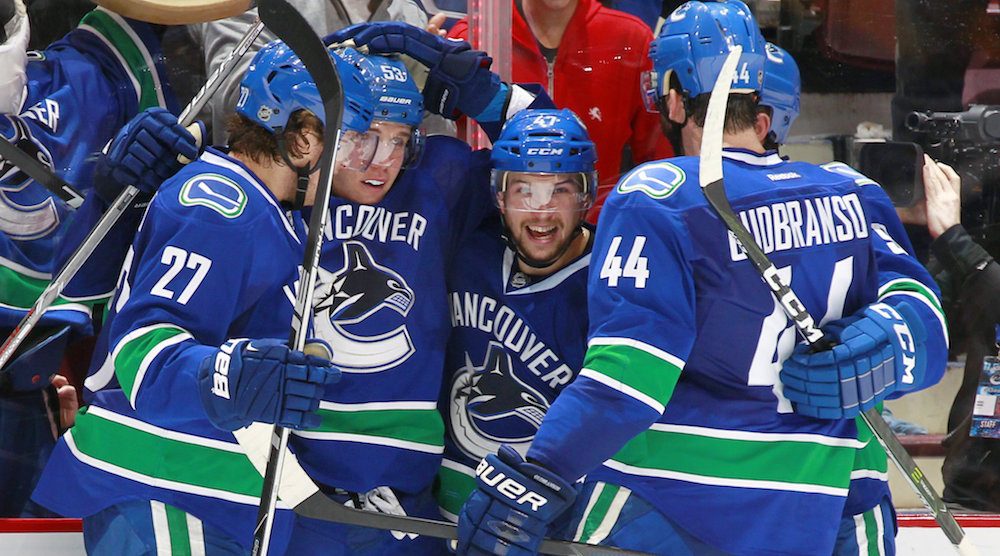 Heading into the season, many of the talking heads in the sporting world had the Canucks finishing dead last in the West. Hell, even the locally-based EA Sports ran a simulation in their NHL 17 game, and it put the Canucks dead last as well. “65 points!” many of them cried. “Nolan Patrick!” came the resounding cry of the underground Team Tank movement.

Well, three games into the season, and it looks like the Canucks have different plans. Like a zombie in the Walking Dead whose been tasked with killing off a main character, you cannot stop the 2017 Canucks so far.

They’re 3-0 after beating the St. Louis Blues 2-1 in overtime on Tuesday night. It’s their third win in a row, and their third-straight win after trailing heading into the third period.

Granted, it’s only three games in. How many times did Roberto Luongo struggle in October only to find his groove for the rest of the year? Things can change quickly in sports. For all we know this is a Vancouver Grizzlies innaugral season-like peak to start the year.

But there’s also the possibility that this Canucks team isn’t nearly as bad as last year made them out to be. Or that maybe those injuries last year really did play a part in the mess that was 2016. Or maybe Doug Jarvis is the Thor of defensive strategies, flying in from Asgard because he felt sorry for the sad little humans. Maybe Brandon Sutter read up on the advanced stats against him and decided to defiantly score goal after goal.

Or maybe this all falls apart in a month, and Team Tank gets really mad about that time the Canucks got six points to start the season.

Either way, it’s been a hell of a lot more interesting to watch then last year so far, so let’s just see how this one plays out.

Let’s dive into tonight’s game, shall we?

You see, Matt Who-It because they signed the unknown Matt Hewitt for a day, and his last name sounds like…you know what, forget it.

Matt Hewitt, for those who hadn’t heard, was a UBC goalie following in the proud footsteps of Chris Levesque, filling in on an emergency basis because the starting goalie was injured on game day.

In this case, it was Ryan Miller arriving at the arena and not playing because he felt “tight”. Not “tight” as in cool, but tight as in something hurt and that was a vague enough description to tell the media. Reports of him “swooning with alarm” are untrue.

As is tradition anytime an emergency goalie plays, the camera has to get a shot of him on the bench at least once looking around him so we can all talk about what a day this must be for him. Then the starting goalie has to be run at one point so the camera can pan in on the one day goalie to search for signs of panic.

I am happy to report both things occurred, and Matt Hewitt now gets a Canucks jersey with his name on it, and bragging rights at all future frat parties and/or office functions. In fact, Hewitt sounded pretty comfortable after the game.

That’s the kind of 2011 swagger that drives Mark Recchi to high levels of anger. Of course, Hewitt was just having fun with his day in the sun, even if it did come with some chirps.

“They made me feel like one of the boys right off the bat, I got chirped here and there, I didn’t mind dishin’ the chirp back to them, you know, that’s hockey culture.”

And don’t worry, when Markstrom got run over, he was ok if Hewitt had to take over.

“He was looking great in the warmup there, I wasn’t too worried”, Markstrom said with a grin.

Because “Look at” kind of sounds like “Luca” and, you know what, if you’re not going to follow along with this, forget it.

Luca Sbisa has had a solid start to the season. Maybe it’s a case of not being played above his head, but his noticeable awful turnovers haven’t occurred yet, and he’s playing physical in a smart way. He’s not running out of his way too much to land a big hit. Hell, he even tried using some slick soccer skills to score a goal tonight.

Any time a player hit Sbisa, he wouldn’t say a word, he just put his hard hat on, and hunt that guy down to get revenge. Legal revenge, not Bertuzzi revenge. Ryan Reaves, a man-beast who scares NHL players in their dreams at night, landed a huge hit on Sbisa earlier in the game. What does Sbisa do? He returns the favour. No big deal.

He looked like an assassin bored of his job.

Corsi wise, Luca was the worst on the team, mind you. His puck transition game will never be as high as management claims it is. But he was leaned on heavily in his own zone, starting the most amount of shifts in his own end of any defenceman, so his paltry 30% Corsi can be explained off a bit that way.

And again, the “it’s just three games” rule still applies, but eye-test-wise, Sbisa has looked much more…stable, for a lack of a better word.

In fact, the entire team has looked better that way. They look like they have structure, and their puck possession stats reflect that.

Doug Jarvis, you wonderful bastard you? 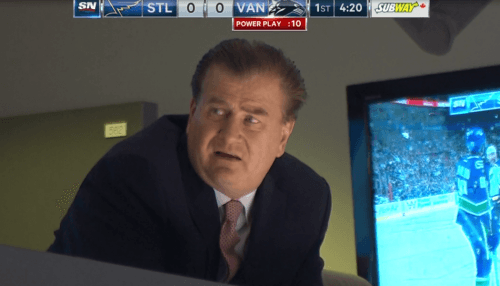 Alex Steen must have gone to the Shane Doan Summer School of Pain and learned how to try and maim young Canucks. He landed quite a hard shot on Bo, which led to Benning getting the same look Nonis had when Luongo was in the bathroom to start overtime.

Luckily for Canucks Nation, Bo Horvat wasn’t hurt, he was just angry and would stay in the game.

To overtime we go!

The point is, Bo Horvat played the type of game you would let your daughter marry. Strong, safe, and smart.

This is just one of the many good saves Markstrom made on the night. Considering many people thought that St. Louis would ventilate the Canucks, it was pleasing to see that Markstrom kept it a 1-0 game for the majority of the game.

After a weak start against Carolina in which he wasn’t really a factor in the win, this game was decidedly on his Swedish shoulders and he was great. He wasn’t scrambling in net very much, he was tracking the puck well, and he never touched the puck in the no-zone.

As many people pointed out last year, goaltending wasn’t the issue for Vancouver, so having a healthy team in front of Miller and Markstrom probably ensures more points than last season.

On top of that, Markstrom was also very active in keeping the puck alive in overtime, which eventually lead to the winner, passing the puck out instead of covering it.

“Three-on-three you really want the puck, that’s huge. It’s tough to take the puck if you have the puck.”

5. SEAN ELLWOOD CAN RELY ON HIS TACOMA

For those who watched the game on Sportsnet, you’ll know they did their best to keep Canucks fans awake during the commercials. During the very loud, loud commercials.

And although the game had a great ending, and there were several scoring chances before that, it wasn’t the most entertaining game you’ll see. I know many fans are just going to remember this as an amazing comeback win, but a lot of the game was low event, low passion hockey.

Its so dead in here tonight..

Is that a bad thing? For ticket sales and general interest, yes.

If you remember, previous regimes have always pumped the tires on an “exciting brand of hockey” in order to keep fan interest, so it will be interesting to see what the fan support is like this year. If this team is going to have a good season it will most likely be with low event, solid defensive efforts like tonight.

But as they say in sports, “just win, baby!” so maybe that alone will start bringing bodies back to the arena. Just having the feeling the Canucks can come-back to win games is a large change from last year where it was basically “go home” time after the other team scored their first goal.

As it stands now, though, the Canucks are a far cry from fans having to pay to be on a waiting list to get tickets.

Never forget that. They made you pay to be on a list to buy tickets, and now they’re cold calling you to buy tickets to a game, any game. Oh how times change.

And as is also tradition, the daily “this place is real empty” was fulfilled by the SixPack Capo Omar.

Tons of empty seats at Rogers for Tarasenko and his Cup contenders pic.twitter.com/tRbrReVEnI

Much was made about Chris Tanev adding an offensive touch to his game by working on his shot during the summer (a la “The Great Summer of Ryan Kesler” that turned him into a 41-goal scorer), and for most of the season his shot has looked as harmless as ever. Like a cute puppy that walks into your front room and barks at you before settling down for a three hour nap.

Well, he might not have scored the overtime goal tonight, but damn it, he was in the right place at the right time, and that’s worth something at least.

Henrik Sedin was credited with the game winner. Instead, he got an assist, and spiritually, that was Chris Tanev’s goal.

Bonus Gif of the Night: