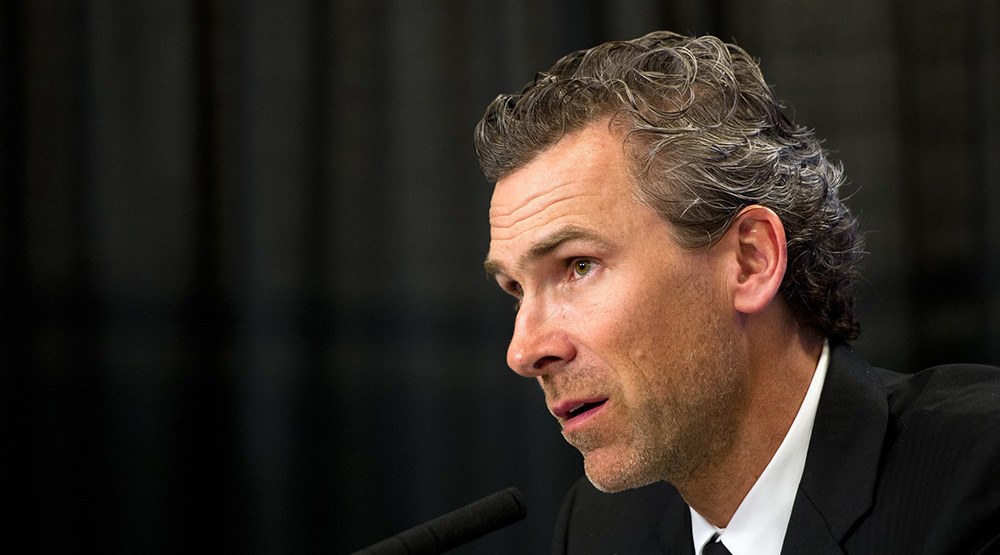 Sounded like a sizeable lump in Trevor Linden’s throat as he addressed the media on Monday.

The Canucks had just fired head coach Willie Desjardins, but the press conference was a complete review of the disastrous 2016-17 season in which Vancouver finished 29th out of the 30 NHL teams.

“No one’s happy with where we finished the year. Certainly there’s a level of responsibility taken here at this table.”

While you have to give him credit for finally taking a little responsibility – he’s passed that off onto the previous regime repeatedly in the past – Linden’s current feelings, which he described as “frustrating” to TSN 1040 a week before the end of the season, are an issue.

See, despite what he’s said about how always understanding where the Canucks were at in their cycle, that frustration is a dead giveaway to the not-so-well-hidden truth.

The truth being that the team has veered off course, steering sharply into oncoming traffic, away from whatever it is Linden and Benning had hoped for.

“I think our actions have supported a longer term view. Certainly we’ve tried to address anything in our lineup with last year at free agency for example, but we’ve always had our eye on the future,” he said.

“I think we understood where we were, where we need to get to. I’m encouraged where we are today.”

Luckily his pal Honest Jim was sitting next to him to clear things up.

Benning was asked if he expected the Canucks to be a 70-point team back in September.

“No, I didn’t. Until the end of January I thought we were competitive in all the games,” he replied.

“We thought we were going to have a more competitive year but it just didn’t happen.”

Here’s the thing: for a team that is willingly and honestly going through a rebuild, losses should not be a source of frustration.

If Linden and Benning truly understood where the team was at and had a handle on the path back to success, they would not only have foreseen the struggles, they would have been prepared for them.

You only have to look as far as Toronto, where upon being hired, Mike Babcock proclaimed, “There’s pain coming.”

With that simple statement, Babcock primed the city for a season at the bottom of the standings. Leafs Fans, knowing pain was part of the process, not only embraced the team, they supported and enjoyed the ride.

Back to the Canucks’ current plight – this team won’t find success until the men in charge can chart a clear path back to the top. Once that path is set, they have to put the right pieces in place to get there.

Over the past three seasons, Linden and Benning have aimed to stay in the playoff hunt while restocking the prospect pool. Key players they acquired to do that included Brandon Sutter, Luca Sbisa, Matt Bartkowski, Linden Vey, Erik Gudbranson, and Loui Eriksson amongst others.

Benning’s foundational players have been overutilized and underwhelming, and they speak volumes on what he looks for in talent.

On Linden – one of his biggest faults is he has had no pulse on Canucks fans, despite living in Vancouver for so long.

“I’ve been in this market almost 30 years now so I understand the passion our fans have and how much they care,” Linden said to TSN radio Monday.

“I speak to many of them whether it be on the street, at the grocery store, on the phone, or at the rink here.”

If he is hearing them, he’s not listening.

It’s simple really – fans want a Stanley Cup and they’ll do whatever it takes to get there. Two losing seasons, five losing seasons – if it gets them to the promised land they’ll take it however you give it.

One person who does appear to get this is TSN analyst Ray Ferraro.

All season, Ferraro has consistently critiqued Vancouver’s inability to see their best days are down the road, and has said they should focus on that instead of the present. His clarity on the steps needed to become a contender again is exactly what’s missing from the current group.

Speaking on the radio Monday, Ferraro said he’s always dreamed of being in a management role, and he misses being a part of the wins and losses with a team.

He also mentioned that he doesn’t want to leave his family for extended periods of time, so with them being in B.C., the Canucks would be a logical fit.

Meanwhile, the Canucks have Linden in charge. He says things like this following a dismal 69-point season.

“We’ve walked the fine line between trying to develop players at the NHL level and winning.”

Walked the fine line? Let’s be real: they walked it as well as a drunk might handle performing a balance beam routine.

Oh yes, it’s been that painful.