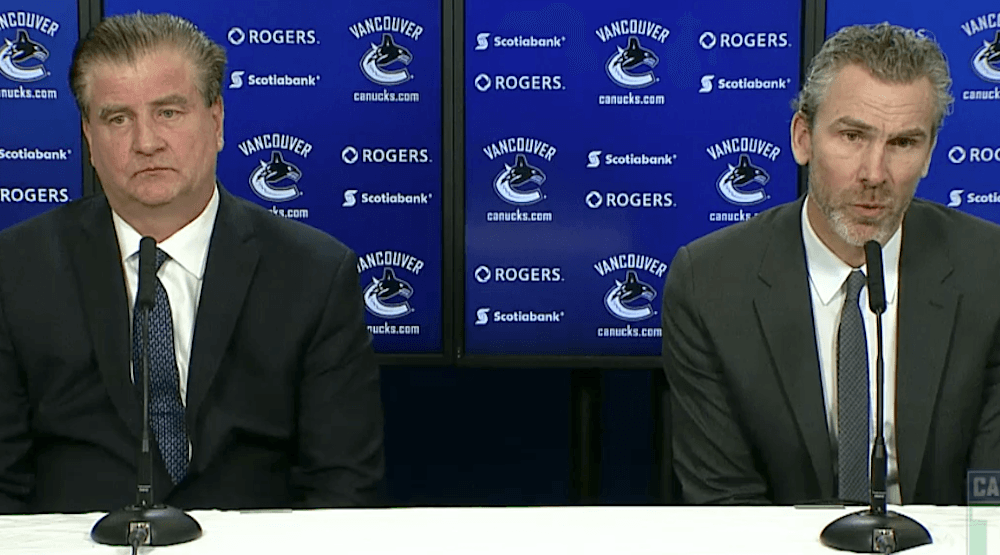 The first step for a rebuilding franchise is admitting you have a problem.

The Canucks, who finished the regular season with a putrid 69 points – good for second-worst in the NHL – aren’t fooling anyone anymore. And it sounds like they’re not fooling themselves, at least we hope.

One of those days… pic.twitter.com/8eHuW3sOZb

Trevor Linden and Jim Benning held a press conference on Monday in Vancouver where they answered questions about their decision to fire head coach Willie Desjardins after three seasons on the job.

The decision to let Desjardins go was the right one, but the way in which Linden and Benning described the outlook of their team was different from what we’ve heard in the past. There was spin, for sure, as they would have you believe that this was the plan all along.

Of course, if you’re paying attention, you know that’s not true. The plan was to continue to make the playoffs, or at least make a strong push for it. The plan was to restock the prospect cupboard with mid-first round picks rather than top-five picks.

That’s not the message anymore, as Linden tiptoed around using the word “rebuild” a number of times.

“No one wants to lose, but I also think our fans understand where we are as an organization and understand that it’s going to take some time to get to where we need to get to,” Linden said.

If you can get past the spin, you get the sense that management has learned some hard lessons in three years running the Canucks.

They still refuse to use the word “rebuild,” – Don Taylor tried his best in an interview with TSN 1040 – but given how badly fans in Vancouver want a rebuild, I question such a strategy.

Taylor: “Would it kill you to say the word rebuild?”

Linden: “Honestly, I think there’s been so much made out of that, I think it’s pretty clear to see where we are. I think our actions have supported our message, by getting younger, introducing young players into our lineup and building a prospect pool.”

If we base opinion on decisions made in the first 2.5 years on the job, the answer has got to be no.

In year one, the Canucks made a number of win-now moves. Ryan Kesler forced their hand, demanding out before Linden and Benning’s arrival. That was a trade that should have set the Canucks up for years – a jumpstart to the rebuild – but instead the club now has, more or less, a group of role players in Brandon Sutter, Erik Gudbranson, and Luca Sbisa to show for it.

It should be pointed out, that the analytics watchdogs warned us about all three of those players before their arrival, and they appear to have been proven right.

Sutter, Gudbranson, and Sbisa represent three players with hefty contracts, despite not being legitimate top-six forwards or top-four defencemen… At least not yet.

The signing of Loui Eriksson to a six-year contract worth $6 million per season, despite the fact that he’ll be 36 at the end of that deal, is another example of management dropping the ball. By the time this team is ready to compete for a playoff spot in 2-4 years, Eriksson’s deal will look even worse than it does today.

This also goes to explain how on Earth the Canucks could finish near the bottom of the standings for two years in a row while spending near the ceiling of the salary cap.

#Canucks didn't give WD much to work with, but still made many/repeated curious deployment choices with the players he had at his disposal

Letting Desjardins go was a necessary change to make, given how the team plummeted in the standings the last two seasons, but you have to wonder if poor Willie ever had a chance. Sure the use of his players – overusing the likes of Jayson Megna, Brandon Sutter, and others – while seemingly being slow to respond to the strong play of young players was puzzling. But Scottie Bowman in his prime wouldn’t have been able to drag this team into the playoffs.

First and foremost, the roster is flawed.

Linden: When I look where we are today, I'm a lot more optimistic than I was at any other time I've been here. #Canucks

Management mentioned how their prospect pool has improved, and I should hope so. The prospect cupboard was relatively bare when they took over, so restocking it had to be of supreme importance.

We’re already seeing some potential in players like Brock Boeser, Nikita Tryamkin, and Thatcher Demko, so there’s reason to have faith in Benning’s eye as a scout.

But the other side of the coin is that the Canucks still don’t have prospects oozing with elite-level potential.

Picking Jake Virtanen over more talented players like William Nylander (61 points this season) and Nikolaj Ehlers (64 points) in 2014 looks like it will set the organization back at least another year. It’s too early to make the call on picking Olli Juolevi over Matthew Tkachuk, although Tkachuk (48 points and 105 penalty minutes as a 19-year-old) has set the bar pretty high already.

Impatience led the Canucks to dealing too many draft picks away. Instead of stocking up, the Canucks have had just 20 draft picks in the last three years – one less than they would have had if they just held on to their picks. But it’s actually much worse than that.

The Canucks haven’t had a second round pick in the last two drafts. They had two first round picks in 2014, but dealt away one of them less than two years later.

One of the nice surprises was fifth-round pick Gustav Forsling, who was traded less than a year after being drafted.

After three years, the Canucks don’t appear to be close to being a playoff team. That’s a real concern.

Three years should be enough time to restock the cupboard and begin to see the light at the end of the tunnel.

The inability to discern what the Vancouver Canucks were and where they needed to go in 2014 is why they’re in this mess. And a trip to the playoffs in 2015 only managed to reinforce the illusion that the Canucks could be rebuilt on the fly.

Sure, the Canucks made moves to help the future – the Eddie Lack and Kevin Bieksa moves are examples of that – but there are too many other moves that showed that management believed this team was better than they were.

Hopefully now, having made a couple of excellent moves for the future of the franchise at the trade deadline by dealing away Jannik Hansen and Alex Burrows, Linden and Benning have learned from their past mistakes.

“Since the deadline, we’ve added young players, and we’re going to continue to do that,” Linden said at Monday’s media availability.

The question – again – is do you trust Linden and Benning to get it right this time around? It took reality slapping them in the face before making the tough decisions that were needed two years earlier.

If this is a case of a rookie president and a rookie general manager finding their way, then maybe they deserve more time. Or if Benning’s drafting – Virtanen aside – is better than the competition, then perhaps the Canucks rise above it all in the end.

But if we’re looking at track record – and really that’s all we should judge a management group by – so far they get a failing grade. There’s time to turn it around, as this don’t call it a rebuild, rebuild, carries forward though.

Most regimes get to make one coaching change in their tenure and Linden/Benning have played that card.

Now the spotlight shines brighter, as the next firing announced could be them.