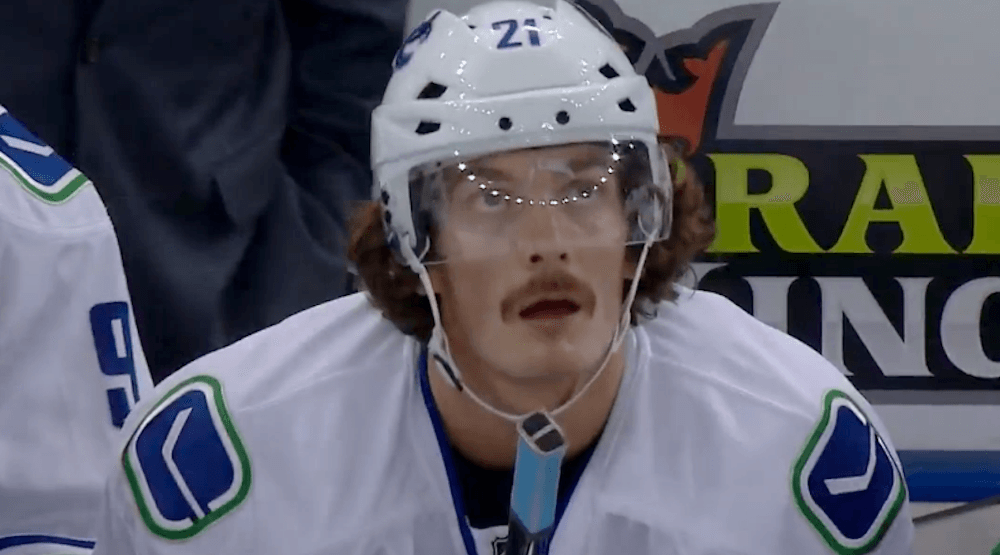 And so did Sven Baertschi!

Alex Burrows (remember him?) scored not one, but TWO goals!

Vancouver eventually put five (FIVE!) past the Rangers to end their losing streak at nine games.

Time for another edition of Hump Day Hockey:

It’s the Canuckiest thing to ever happen. Vancouver goes out and signs a 30-goal scorer, a player heralded for his strong play game-in, game-out. A player who has unquestioned chemistry with the Sedins.

So of course it took Loui Eriksson 14 games to score his first goal.

Don’t be surprised if Eriksson goes on a bit of a run now after snapping a career-long goalless streak.

Going through a scoring drought is tough, but it’s even tougher when:

a) Your team is losing

b) You’re counted on to score goals

d) You just signed a big contract with a new team

For at least one night, Eriksson got the monkey off his back. On Thursday, he’ll get a chance to add to that against a Detroit team that has lost five of their last six.

Hey @MileyCyrus @Rosie @georgelopez @WhoopiGoldberg @cher were selling our house in Canada. Give you a good deal. Its time for us to go home

Is anyone surprised that David Booth is a Trump supporter? Didn’t think so.

3. What the hell happened to the Grizzlies mascot?!

Remember Grizz, the Vancouver Grizzlies’ mascot? In the second half, he would transform into Super Grizz, and soar through the air off a trampoline for some entertaining slam dunks.

Well, Memphis kept him as their mascot and apparently he’s a stripper now?

For your viewing pleasure: @grizz dancing to @Ginuwine‘s Pony. pic.twitter.com/uySCMjagfT

Wayne Gretzky dancing at a wedding…

Remember how great the Leafs looked against the Canucks? Well…

Toronto came crashing back down to Earth, losing 7-0 in their very next game.

Kind of interesting, seeing as how the Montreal Canadiens did something similar just last week.

After shutting out the Canucks 3-0, they lost 10-0 to the Columbus Blue Jackets the next night.

Vancouver seems to lull teams into a false sense of security. In fact, the team that has beaten the Canucks has lost their next game 6 out of 8 times this season.

Let’s do a little check-in on some Canucks players from last season:

Radim Vrbata’s got his groove back in Arizona, scoring nine points (4-5-9) in 12 games.

Jared McCann recently scored his first of the season, getting fourth-line minutes (9:55) in 13 games with the Florida Panthers.

Dan Hamhuis is still a stud, logging 20:22 per game for the Stars (second highest on the team), and adding four assists in 12 games. Wonder if Chicago and Dallas are regretting not upping their offer at last season’s trade deadline?

Adam Cracknell is still in the NHL, playing in Dallas with Hamhuis. He’s playing 10:26 per game, while potting two goals and one assist in 13 games. Solid numbers for a fourth liner.

Hunter Shinkaruk is back in the NHL, playing one game with the Flames after scoring seven points (4-3-7) in seven games with the Stockton Heat of the AHL. This is a big year for Shinkaruk, who Calgary will need to decide whether or not they’ll protect the youngster in the expansion draft in June.

Shinkaruk’s teammate in Stockton this year has been Linden Vey, who has nine points (3-6-9) in eight games.

Also not playing in the NHL this year is Ronalds Kenins. He’s playing for Zurich SC in the Swiss league, scoring four points (1-3-4) in 15 games.

Speaking of Switzerland, Swiss-born defenceman Yannick Weber still has an NHL job, appearing in 11 games with the Nashville Predators (he’s the new Weber there), scoring two points (0-2-2), while logging 11:40 of ice time per game.

Emerson Etem has been put on waivers twice already this season, and after three games with the Ducks, the Californian is playing for their farm team in San Diego, appearing in one game so far.

It’s not ideal, but being close to home for the Long Beach native probably isn’t the worst thing in the world, given that his wife just gave birth to their first child.

Remember Matt Bartkowski, the player that head coach Willie Desjardins refused to bench, despite the evidence of his play on the ice last season? He’s out of the league, playing with the Providence Bruins in the AHL. He has four points (1-3-4) in 10 games.

This could be the end of the road for Chris Higgins. After being released from a PTO with the Flames, he hasn’t found a new home yet.

Brandon Prust seems to be everywhere in Toronto these days. At Jays games, TFC games, etc.

He’s actually without a contract and hasn’t played anywhere this season, although he’s not sitting at home. He’s practising with the Toronto Maple Leafs, the team he was on a PTO with in preseason.

I’m sure we’ll get an update on how Prust is doing on the next episode of Hockey Wives.

7. Proud of her husband

Speaking of Hockey Wives, Ryan Miller’s wife Noureen DeWulf is on the show. She also had my favourite tweet of the week after her husband stuck up for Troy Stecher.

I hope someone threw their bra on the ice for me #toughm*therf*cker https://t.co/i3QfV9P7QD