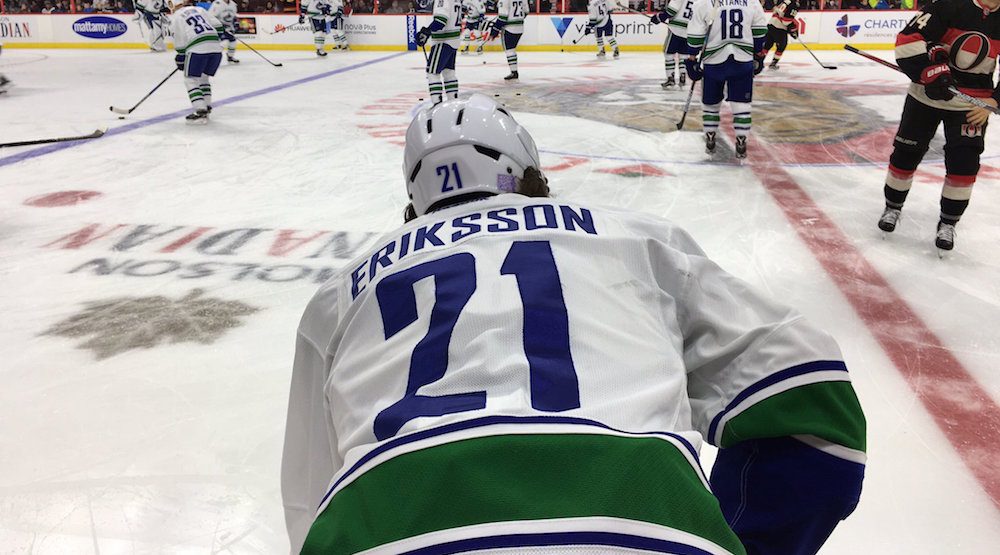 Loui Eriksson scored his seventh goal of the season Wednesday night against the Los Angeles Kings. With the Canucks on the power play, he received a between the legs pass from Bo Horvat, then showed great patience after coming out from behind the goal line, freezing Drew Doughty, and beating Peter Budaj to the stick side.

It was a goal scorer’s goal. It was the kind of play that you’d expect from a player on a six-year, $36 million contract.

“It was definitely nice to get that start,” Eriksson said, answering a question about how the goal would affect his confidence. “I had a lot of room on that goal, Bo made a great pass on the corner, hopefully we can build on this one and keep it going.”

It was the kind of play that had Omar dreaming about a Horvat-Eriksson super duo in Wednesday night’s SixPack.

But unfortunately for Eriksson and the Canucks this season, the kind of play he made against the Kings has been too few and far between.

That’s a major disappointment for everyone involved, which begs the question: what gives?

Has Eriksson lost his way? Is age catching up with the 31-year-old? Does he simply need more time to acclimatize to his surroundings?

If you ask me, it’s impossible to definitively answer those questions because Eriksson hasn’t been put into a position to succeed this season.

If you sign a player to a $6 million per season contract, doesn’t it make sense to deploy him like a $6 million player? So far, that hasn’t been the case.

Eriksson didn’t help matters early on, of course, going goalless in his first 13 games. But he has seven goals in his last 23 games, and given his resume, deserves the benefit of the doubt.

He was given a chance with the Sedins early on, but it appears head coach Willie Desjardins doesn’t prefer that look. Fair enough, as Jannik Hansen has been their most effective winger, and the coach likes a player with speed to play with the slow-footed twins.

While the trio of Eriksson and the Sedins looked all-world at the World Championships in 2013, that was a long time ago, and on different sized ice. At the World Cup in September, the Sedins and Eriksson combined for six points in four games, all at even strength. That’s hardly all-world, but not avoid-at-all-costs either.

But if the place for Eriksson is not with the Sedins, then they need to find him a home.

So far that has been primarily with Brandon Sutter and Markus Granlund. At times, it has been with the immortal Michael Chaput.

Last year with the Bruins, Eriksson played the bulk of the season with David Krejci and scored 30 goals. Safe to say it’s time to give him someone else to play with.

So what about Horvat?

Horvat has looked good with Sven Baertschi and Alex Burrows on his line, but you have to think Eriksson is at least worth a look with the dynamic young Canucks centre. Horvat is giving the Sedins a run for their money for the team’s scoring lead this season, what if he gels with a player like Eriksson?

Safe to say at even strength, it’s time for Horvat to become the unquestioned second line centre on this team. Give him the second best winger to play with.

As for the power play, Eriksson has been relegated to the second unit for some time now. It’s time to move him back to the top unit.

Given the team’s success rate this season (14%, 26th-best in the NHL), they haven’t got much to lose.

Speed is not a factor with the man advantage, although handedness is. That’s the advantage Brandon Sutter has, playing with the Sedins as a right-handed shot.

We’re nearly into January and Sutter has three power play goals. Despite the perceived advantage of being a right-shot, allowing him to one-time shots from Henrik and Daniel Sedin who set-up on the right-side, it hasn’t been successful.

In fact, none of Sutter’s power play goals this season have utilized the advantage of being a right-shot.

On November 13, Sutter scored a power play goal, receiving a pass from the left side from Daniel Sedin off the rush, and wristing a shot home. On November 29, he scored with the man advantage by tipping home a point shot from Troy Stecher. And on December 18, Sutter potted a rebound off a Sven Baertschi point shot.

This is not to bury Sutter – he hasn’t been the team’s only problem on the power play – but it does shine the light on Eriksson. If Sutter isn’t clicking on one-timers from the Sedins, what’s he doing? If the answer is making passes and tipping shots, those are two of Eriksson’s specialties.

Eriksson could slide into Sutter’s spot in the slot, or move to the spot Daniel Sedin currently occupies, down low, allowing Daniel to move into slap-pass position. Or they could, you know, move around and be less predictable?

Given his lack of production this season, Eriksson will receive his fair share of criticism. But if he doesn’t get a long look with Vancouver’s best offensive weapons, should we be shocked with poor results?

It’s time for Willie Desjardins to hitch has wagon to Eriksson on the ice, just as the club has already done with their pocketbook, and see what the five-time 60+ point scorer can do.