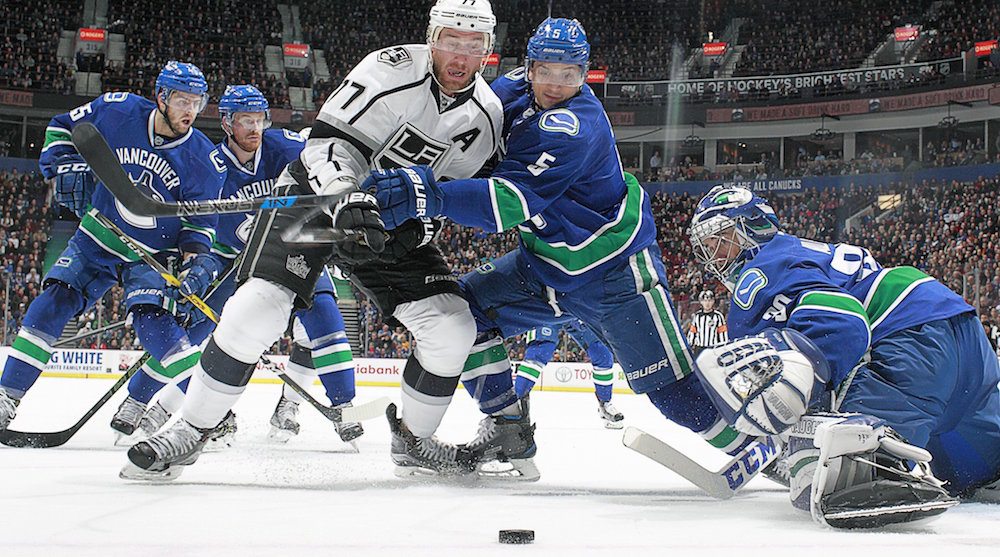 There’s a reason there’s such an emphasis on starting games well.

The Sedins started for Vancouver and had L.A. hemmed. As a result, the Canucks got an early power play, on which they scored.

Game story? Really, I don’t need to do much more than display this chart showing shot attempts. 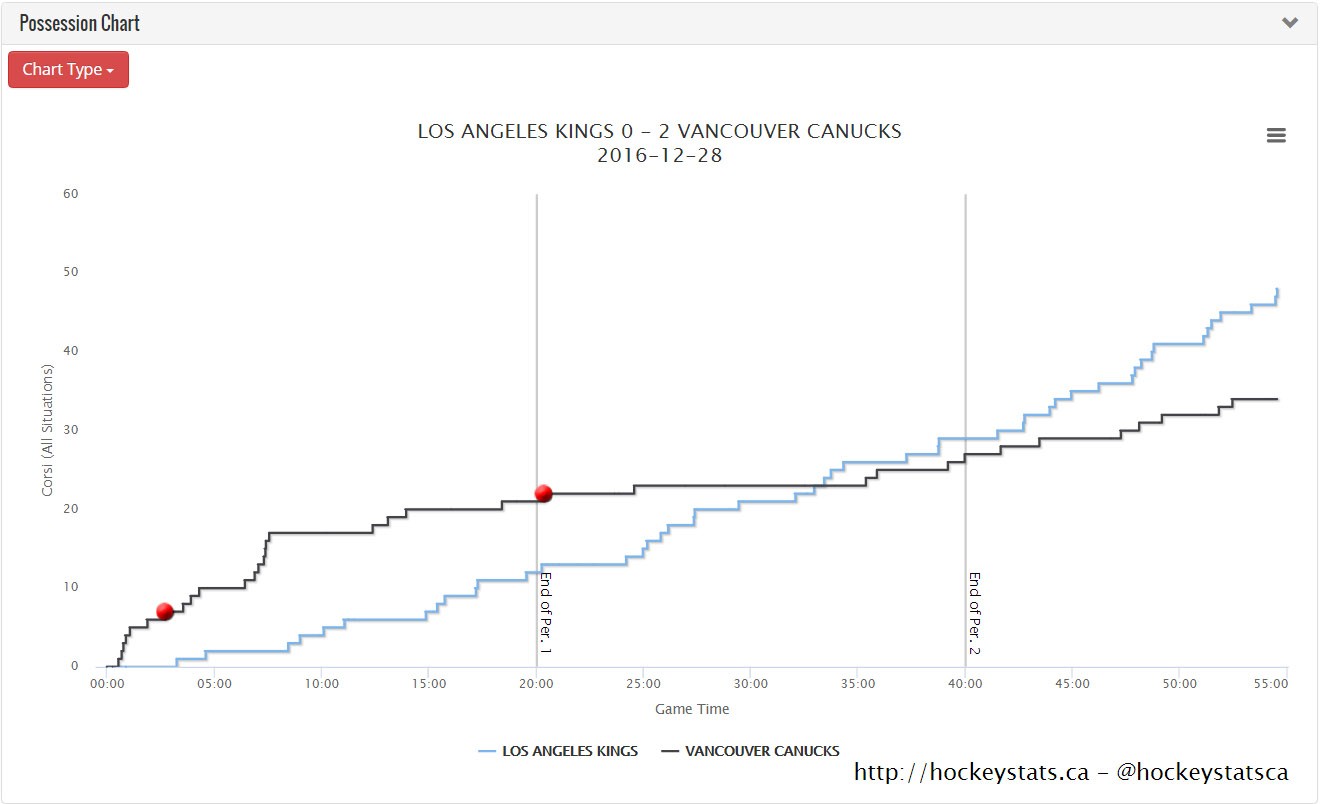 You can see it with your own eyes: Vancouver found the glitch in the Death Star. They deserved to be annihilated, yet they emerged victorious.

When looking at the shot chart, realize Vancouver’s three power plays in the first 15 minutes of the game caused their shot bump. After that, all Kings.

An amazing Miller, a stroke of luck, a Christmas miracle – credit whatever you want – Vancouver stole this game and came back from the holiday break with a big win over a division rival.

One of his best of the game – this on Anze Kopitar at the end of the second period.

When we found out Hansen’s knee injury would keep him out of the lineup for weeks, there was panic in Canucks nation.

No Honey Badger = no playoffs? Vancouver will stand no chance of winning?

That wasn’t it at all – Canucks fans have grown accustomed to losing.

The fear was real.

Somehow, Willie didn’t go there. His thought process? This, from @squampton, one of the best Canucks photoshappers in the galaxy:

On the bright side, Jeff Paterson’s tweet of Vancouver’s new #1 line prompted some amazing responses.

@patersonjeff if I’m the owners, Willie D is fired just for saying that. Completely embarrassing

@patersonjeff Fire WD into the sun

@patersonjeff Sometimes I think he wants to fail.

@patersonjeff is this the Canucks strategy to get the Sedins to ask for a trade?

Funny thing is it took a full 40 seconds of seeing Megna with the Sedins for me to become a convert.

Don’t get me wrong: Megna doesn’t make as much sense as Burrows does, but he’s a massive upgrade on Sutter. He helps them more than Eriksson too.

Megna doesn’t do all of that (Hansen does, Burrows did), but he does the speed part. That alone makes him better than Eriksson for the twins.

Megna’s first shift of the game with the Sedins:

(note Edler’s breakout pass, I’ll come back to that)

Another Megna breakout in the second.

Notice how Megna starts in his own corner, passes the puck, then enters hyperspace to get to Hank’s flipped saucer pass in the offensive zone.

This opens up all sorts of new possibilities for the Sedins.

If Miller was Jyn, Edler was his K-2.

Jyn doesn’t make it to the end without the sacrifices of her friends is what I’m saying.

Edler was the only Canucks player above zero in shot attempt differential at +2.

More importantly, he helped the Canucks do something they’ve been having problems with since he left with injury.

You see it in the gif above of Megna’s first shift with the Sedins – Edler, under pressure, delivers a tape-to-tape breakout pass.

Many nights, watching the Sedins, I’ve been amazed at how they have to come back deep into their own end to start their own rushes. Not sure it’s the team’s system or the lack of offensive defencemen, but it’s been affecting their offence in a big way.

Point is, we can talk about Sutter, Megna, Hansen, and Eriksson all we want, but the single addition of their best defenceman makes this team instantly more potent.

Oh, Edler takes shots for Miller like K-2 for Jyn too.

He tries to anyway.

Ray Ferraro called for Eriksson to be paired with Horvat in October.

Really, with the Sedins not clicking with him, it only made sense to pair him with the team’s most dynamic centre.

Horvat would do the digging, Eriksson the finishing and playmaking. It makes too much sense not to try – which explains why it hasn’t happend in Willie’s world.

Vancouver’s early power play showed the promise that connection could have, as Horvat controlled the puck along the boards and got it to Eriksson, whose skill did the rest.

… and this team will do that.

Speaking of Willie, he’s got more reincarnations than there are Star Wars movies.

Every time you think he’s dead, he comes back with even more support from the dark Lord.

The latest we’ve heard (from Jason Botchford) is management will let the story last well into the new year – meaning Willie’s not getting fired until 2017.

And here’s a reason it won’t even happen in January:

January is probably the Canucks easiest month. Face Avs and Yotes twice. February and March schedule is brutal and when the real tank starts

Chances are they come out of January with something around a .500 record; Vancouver will still be within spitting distance of the playoffs (because: Pacific Division and the NHL’s point system); the Hansen injury will be enough of an excuse for Linden to use to justify the mediocre play…

And #WillieWatch will stretch on and on…

As the season continues on and the Canucks playoff chances possibly dwindle (I said possibly, die-hards!), we might need some added entertainment in the SixPack.

I asked my followers to tweet good/funny signs they saw at tonight’s game. Not a huge response, so obviously there weren’t many good signs.

There was this one submission.

I’ll leave you with this.