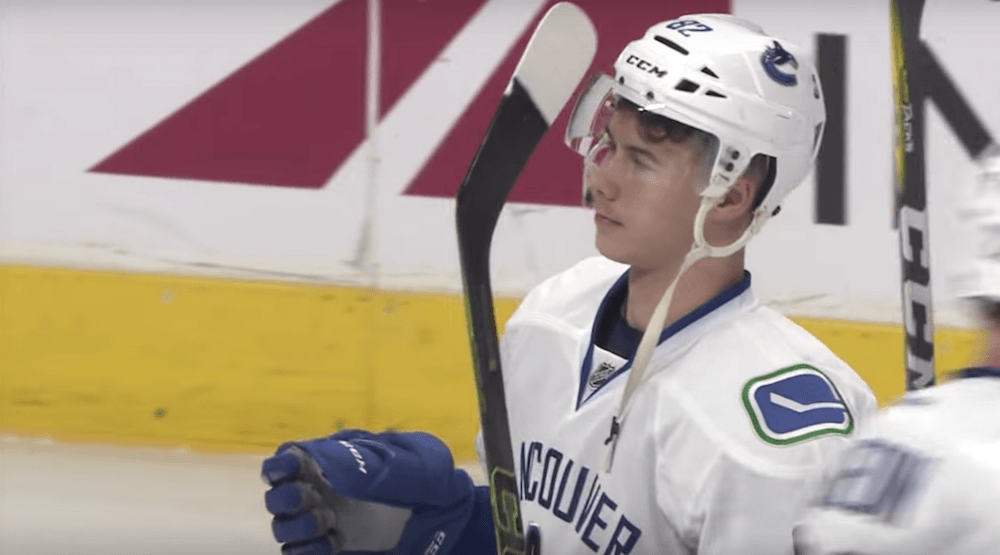 I wonder how Nikolay Goldobin is feeling right now.

Although no doubt happy, he has to be at least a little thrown off by the events of Saturday’s game in Los Angeles.

Goldobin scored the game winning goal in the Canucks’ 4-3 win over the Kings.

Quite a nice goal, in fact.

But Canucks coach Willie Desjardins apparently does not like nice goals.

After scoring the 4-0 goal, Goldobin saw just 23 seconds of ice time in the final 27 minutes.

Willie D has had some questionable lineup decisions in the past, but this one might take the cake.

Which was your favourite Goldobin shift in the 3rd period?

The Willie-guided Canucks nearly blew a four-goal lead, but managed to escape with two points. Here’s what you need to know.

There's something new and well deserved on @BoHorvat's jersey. He's part of the 🅰️ rotation. pic.twitter.com/hl8EtBXhuH

For the first time tonight, Bo Horvat wore an ‘A’ on his sweater.

It’s not a full-time basis just yet, but it’s only a matter of time for 21-year-old Horvat, as some were quick to point out.

@Canucks @BoHorvat THERE IS NO ROTATION. ONLY BO

He made the most of his turn with the letter, putting up a trio of assists in the game.

I like Brendan Gaunce. I say that despite the fact that he’s still without a goal in 54 games this season. He plays well in his role.

Can’t help but feel bad for the guy though. Defencemen sometimes go extended periods without a goal, but this is getting to be quite the ordeal for Gaunce.

It hasn’t been for a lack of chances. Half an inch lower and he opens the scoring here against Ben Bishop.

Luckily, there are a few positives from Gaunce’s lack of goals.

Canuck luck was all over the ice tonight.

Not the bad kind of “Canuck luck” fans are used to. I’m talking about a few bounces in the Canucks favour that really made a difference.

Sven Baertschi opened the scoring on a juicy rebound from Bishop, and then Henrik Sedin doubled the lead on a pass. Lucky, but not all that shocking for Hank.

Henrik Sedin with the fortuitous bounce to put #Canucks up 2-0 pic.twitter.com/KBAWUZnqZ0

Assistant captain Horvat got his third assist on the 3-0 goal credited to Baertschi in the second period.

Props to Bo for taking the puck hard to the net, and bigger props to Nic Dowd for kicking it back into his own goal.

After 40 minutes, the Kings held a 34-16 lead in shots, but were down three goals. A combination of luck, the Horvat line, and Ryan Miller had the Canucks leading comfortably going into the third.

4. Goldobin debuts, scores, and gets benched

Willie Desjardins seemed intent on easing Nikolay Goldobin into the lineup in his debut (as evidenced by his team-low ice time), but the 21-year-old Russian found a way into the spotlight anyways with his first goal as a Canuck.

It was a great pass from Ben Hutton to spring him, but Goldie showed good acceleration to pull free before a quick snapshot low blocker. Let the hype begin.

Goldobin scores and #Canucks fans are all… pic.twitter.com/gf9p0Atb3y

Despite that, and the fact that he was one of only three Canucks with a positive shot differential after 40 minutes, Goldobin hardly saw any ice time in the third.

The Canucks got dominated for most of the third, taking countless penalties along the way.

One of those penalties was Goldobin’s replacement, Jayson Megna. The Kings scored on the power play.

Megna with the costly penalty.. 4-2… Surely this tests the loyalty.. Surely.. Surely.. must.. has to… Probably not

Having been down 4-0 at one point, the Kings found new life in the third. Maybe because the Canucks got tired from running a short bench. Who knows?

A pair of power play goals and eventually this late shorty from Alec Martinez set the stage for a much closer finish than expected.

The most maddening part of this season is rapidly becoming Coach Willie and his deployments. Yet again.

Goldobin was the most striking example, but there were other questionable decisions from the Canucks head coach tonight. Take your pick.

Megna being in the lineup over Reid Boucher continues to be a questionable (though not surprising) decision.

Loui Eriksson led all forwards in ice time by over a minute, even though he had just one point in his last 17 games heading into tonight.

Alex Edler played 28:22, nearly half the game. There’s no need for that.

When asked post-game why Goldobin was benched, Willie said this:

#Canucks WD on Goldie: 'how you come out of the 2nd is huge, so I shortened up in the 2nd. He still doesn't know our systems.'

Why did Willie feel the need to shorten the bench in a 4-0 game?

If anything, it almost cost them the win.

Team tank is arguably as strong as ever right now, but this might be a little much.

What’s more is that it’s a road game. Now that’s commitment to the tank.