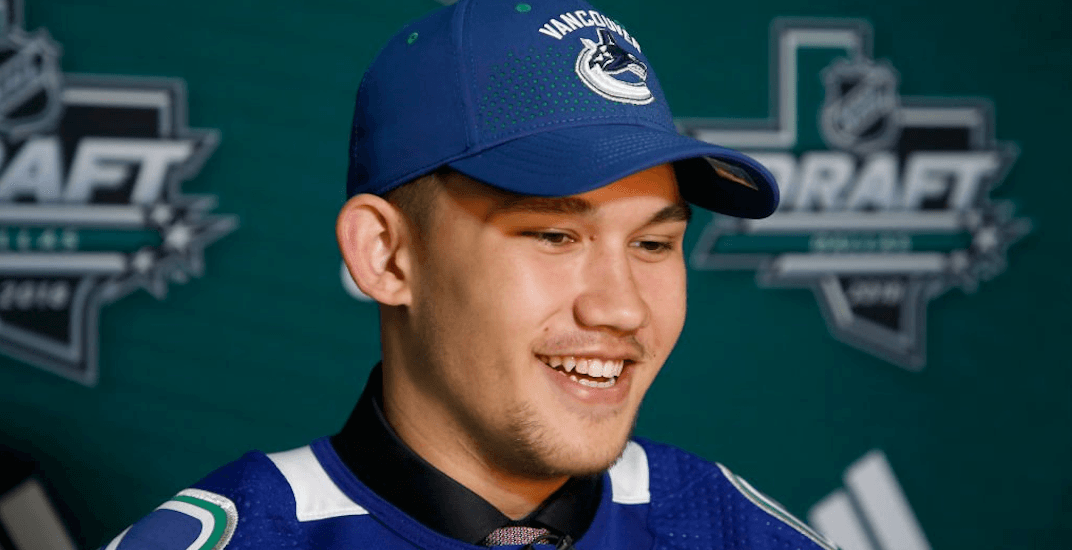 Jett Woo has a chance to be a fan favourite in Vancouver for years to come, and not just because of his kick-ass name.

Just the second player of Chinese descent to be drafted into the National Hockey League, 37th overall by the Canucks last month, Woo will win over fans with his bone-crushing hits on the ice, as well as charisma off it. Just 17 years old, he’s already well spoken and mature beyond his years.

And then there’s the woo’ing.

“It might have been back in my first year in Moose Jaw, maybe when I was 15 and I first heard my last name,” said Woo, following practice at Canucks development camp on Wednesday. “I know it’s gotten a lot of attention, but I’m just trying to block that out and have as much fun at development camp as I can.”

Woo might not be accustomed to a life of stylin’, profilin’, limousine ridin’, and jet-flyin’, but he has become a fan of retired professional wrestling legend, Ric Flair.

“Yeah, maybe I am,” Woo said. “I see a lot of things on Twitter, and Instagram about it. It’s really neat to see. It’s cool to see so much support.”

Still a couple of years away from turning pro, Woo knows he has a lot of work to do before cracking the Canucks’ blue line.

Coming off an injury-riddled season in which he scored 25 points (9-16-25) in 44 games, Woo prides himself on being a well-rounded defenceman.

“Even since I was a little kid, I like to take care of the defensive side of the puck. Once that’s taken care of, my offence will follow. I think the biggest thing for me is to play my game. Work hard, and be that competitive person that other players, when they’re on the ice, have to work to try and beat me.”

If Woo can come anywhere close to modelling his game after his idol, the Canucks will have a cornerstone defenceman for years to come.

“I think for the longest time, and even now, one player I like to model my game after is Shea Weber. I love everything about his game, and he wore the C in Nashville. For him to do that while also playing for Team Canada, is something that I really look up to.”

Attending camp hasn’t been the only highlight for Woo this week. Woo was one of 40 players named to Canada’s roster for the World Junior Showcase, set to take place in Kamloops July 28 to August 4. It’s the first step towards potentially playing for Team Canada at the World Juniors in Vancouver this winter.

“It’s always a dream to put on that jersey,” Woo said. “I’ve been lucky enough to wear it three or four times. Hopefully I’ll go into this camp, and have a great outcome, and hopefully have a chance to wear the real jersey.”

Woo might have an inside track on making the team, as his coach in Moose Jaw, Tim Hunter, was named Team Canada’s bench boss earlier this week. But regardless of who’s coaching, Woo knows that he will need to deliver on the ice – to make Team Canada, and to further his career.

“I think lately I’ve been trying to take myself one step at a time. Right now I’m just trying to do well at development camp. It’s going to be a lot of fun. To put on that jersey, and have a chance to do that, is something that I’m really hoping I get.”