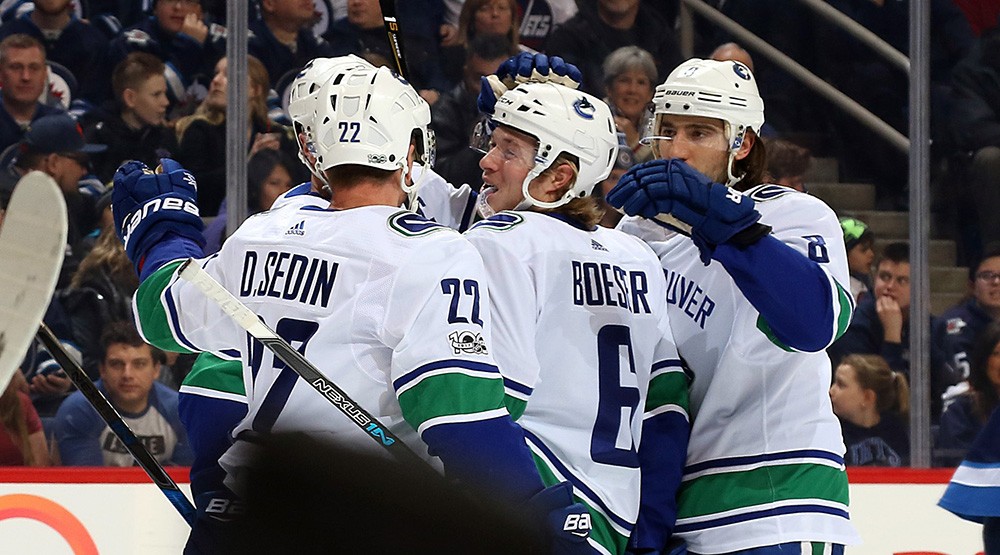 They are who we thought they were!

That’ll be what many will conclude when they see the 5-1 scoreline in favour of Winnipeg, the third straight loss for the Vancouver Canucks. But it’s not true.

Being an avid Canucks fan and a hockey expert as I know you Daily Hive readers are, you know Vancouver’s now missing their top-two centres if you go by playing time, two parts of their top scoring line, one of their biggest heart-and-soul energy guys, and one of their largest defencemen, who is not bad on the penalty kill, incidentally.

Really, Vancouver has been a lot better than everyone thought they would be – they were fighting for a playoff spot throughout November, and, when healthy, they were competitive most nights.

Anyway, that’s all in the past now.

With three massive holes in their top-two forward lines (Horvat, Baertschi, and Sutter), if Nikolay Goldobin wasn’t freed now, they might as well keep him locked up forever, no?

How did fans react to this news before the game?

There was hot, seething anger.

I understand Goldobin sitting, there are plenty of other guys in the lineup that can score goals. Honestly the #Canucks almost have too much offence in their lineup tonight. #allofthisissarcasm

And then there was damning condemnation.

So with that, let’s get into the game.

Great gif from Squampton, who built on a Steve image here:

It wasn’t poor Brock, though, as he ended up playing along the Sedins against Winnipeg. The rest of the forwards, though – they suffered the results of a coach stacking one line to the detriment of the other three.

The Sedin line with Boeser on it was magical, as it turned out, especially early on in the game when they had tons of energy.

The Sedin-Boeser line played their first three shifts in Winnipeg’s end, creating grade-A scoring chances and looking as if they were destined to score five goals. Then on their fourth shift, this.

They created a ton of chances I could’ve giffed, but this one in the third period, just imagine if Boeser had corralled the breakout/semi-breakaway pass here.

Boeser did well to chase it down and send a great pass to Daniel for a dangerous chance, but think about it… Boeser on a 2-on-1 with Henrik…

Boeser passes to Hank, Hank fakes shot, goes back to Boeser, Boeser turnstyles the defenceman, dekes the goalie out of his jockstrap, knocks the water bottle off the top of the net with the roof-job…

I’m telling you, that’s what would’ve happened. Don’t argue, just enjoy it. In your head.

You’ll never guess who else had a good game. In fact, the Sedins weren’t even Vancouver’s best forward line in this one, if you go by shot attempts. 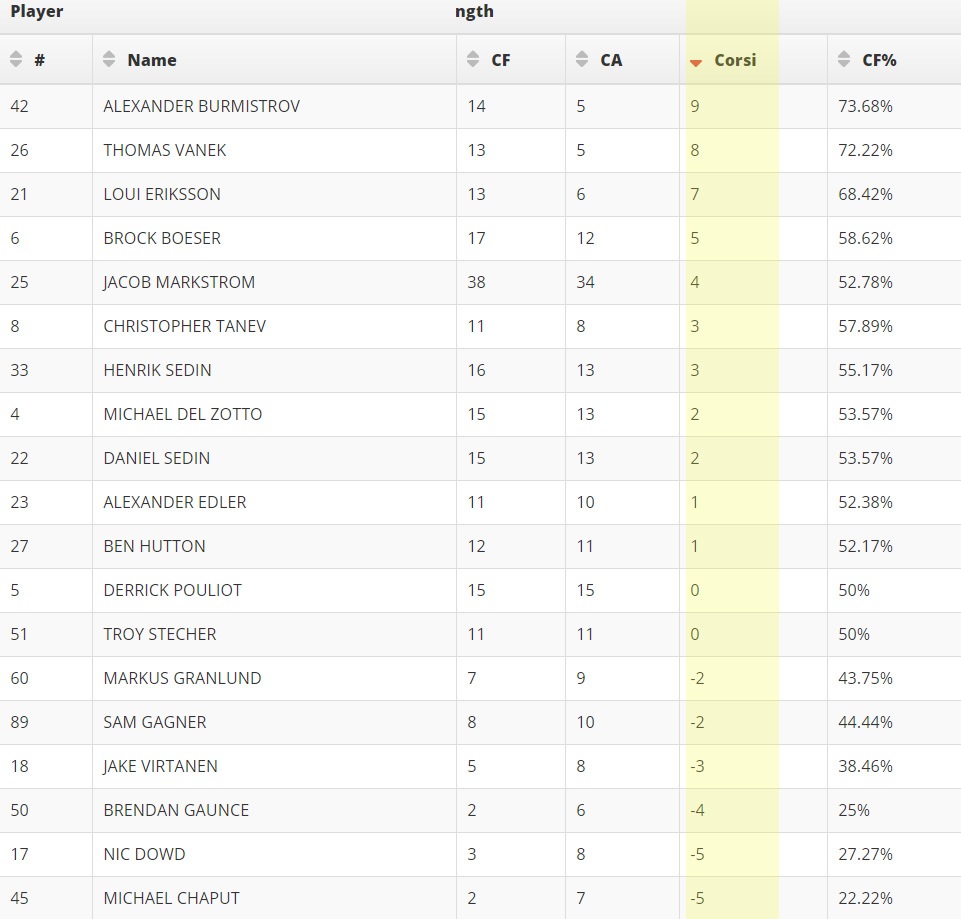 Looking at these numbers, you should realize the Gaunce-Granlund-Virtanen line saw Winnipeg’s top line – the Scheifele unit – more than any other Canucks line. The Sedins saw them second most, though, while Eriksson-Burmistrov-Vanek had easier assignments.

Still, both Eriksson and Vanek generated some memorable chances, and Burmistrov was a part of those.

I mean, I’m sure that doesn’t stop you from wanting him scratched, but just know he played alright, cool?

I stayed positive as long as I could. Here are the goals against.

There was the token Markstrom stinker, to kick things off.

As bad as that was, Boeser scored soon after and the game looked tight and close until five minutes into the second. That’s when “defensively reliable” Chaput did this on the penalty kill. He receives the pass in the middle of the ice at the start of this.

It was a bad play, but let’s not be blaming Chaput too much when the team has three penalty killing forwards injured right now.

The third goal – the disaster developed long before this gif begins, when Tanev’s stick was knocked out of his hands and he and Chaput are left scrambling, exchanging sticks and ending up out of position (you see Chaput bending down to pick up a stick here).

Edler going for the glove save and screening his goalie in the act topped it all off, though.

How does Edler expect to win the Vezina with that weak-ass goaltending??

Won’t bother with Winnipeg’s fourth goal, but here’s their fifth, just to show you the scoreline wasn’t quite deserved.

Even strength shot attempts were 38-34 Canucks. Yes, they shot more because they were down in the third period, still, if the Canucks had half the firepower available to them that the Jets had in this one, they may have won on effort.

4. When life/the season flashes before your eyes

Yeah, the Canucks have lost three-straight, and yeah, they lost 5-1 on Monday, but the youngsters are still making the team fun to watch.

Of course with Horvat and Baertschi injured, and with Goldobin not playing “the youngsters” consists of Boeser and… I don’t know, Pouliot?

With that in mind, I’d have loved to see an iso cam on Jim Benning when this happened near the end of the first period.

Benning, in a contract year and hoping to be re-signed, probably grimaced harder and felt more pain than Boeser when this happened, is what I’m saying.

He came back for the start of the second, though. Breathe everyone.

Elliotte Friedman wrote the following about Virtanen in this week’s 31 Thoughts:

Whatever it may look like with his ice-time, I left Vancouver last week believing the Canucks have a long-term plan for Jake Virtanen. They see a big, strong, fast guy who can shoot it. Whatever happened before, they don’t want to give up.

He showed all of that in one rush. Unfortunately moments before all that, and on the very same shift, he showed why he has only cracked the 14 minute mark twice this season.

He’s the one who rushes back to start the breakout in this gif:

That speed burst from him after Vancouver gets the puck back… it doesn’t even look real. It’s like I messed with the gif to make him look like the Flash.

Anyway, about that “long-term plan”, here’s a chart showing Virtanan’s ice time each game from the start of the season until Saturday’s game against the Flames. 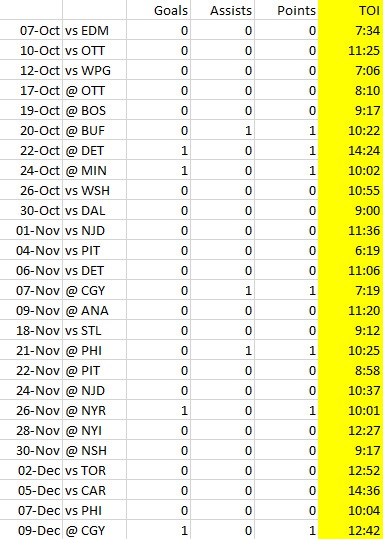 Positives… well, if you produced a graph with a trend line it’d show a gradual increase, so that’s nice.

Went back to that Goldy question with the Canucks down 3-1 in the second intermission.

The anger was still there.

Same with the sarcastic jokes.

But this, the true sadness… this worries me deeply.

I’m not surprised. So conditioned by Willie D’s decisions for the last few years as well as my eternal suffering being a Canucks fan for life. This is par for the course. Death, taxes and suffering when you are a Canucks fan.

“He might be the most natural goal scorer I’ve played with, so you try to find him as much possible and he’s going to score.”

Just to understand the magnitude of this statement, here’s a list of some of the greatest goalscorers Henrik has played with.

OK, so Naslund’s the only one who has any right to be upset here… and he’s too chill to bother.

Note: Thanks to Ryan “the prospect guru” Biech for his help with many of the gifs in this post