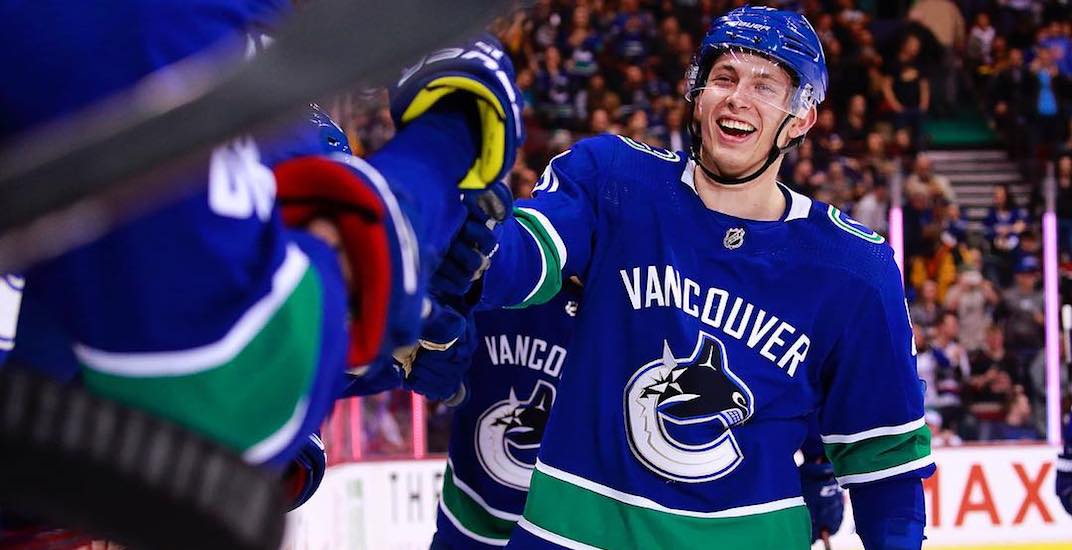 So when the Vancouver Canucks announce a massive 70% off sale, including 40% off current player jerseys — I smell something.

Want to get your long weekend started right? Check out @CanucksStore in-store or VanBase online to save up to 70% on #Canucks swag! https://t.co/6jWNalyw7L pic.twitter.com/8y4I4rp6gC

The Canucks are having a massive sale at their Team Store and online through VanBase.ca right now, and there are deals to be had. A variety of things are on sale, including t-shirts, sweaters, hats, and bags – but it’s the jerseys on sale that have my attention.

Name and number jerseys are selling for $168 – well below the regular price of $280. This applies for home and away uniforms, but not the retro black skate jersey – which continues to be priced at $298 with a name and number.

The Canucks don’t often slash prices on jerseys. Anecdotally, the last time I remember them doing it was in 2013 after the NHL lockout when every team was trying to smooth things over with their respective fanbase. They also cut prices on jerseys in 2007 – shortly before moving away from the navy/maroon/silver orca jerseys.

The Canucks have already publicly stated that they will wear the ’94 black skate jersey for select games next season as part of the 50th-anniversary celebration. Their COO also confirmed that an additional jersey will be introduced, to be used as a third jersey going forward.

To date, the team hasn’t announced changes to their home and away jerseys — though the rumour mill is chock-full of speculation.

A leaked Adidas catalogue indicated that the Canucks will make changes to their current jerseys — though we don’t know how drastic those changes will be. Icethetics speculated that they may remove “Vancouver” from the jersey, which is something that I have since heard from multiple people.

Will the changes be limited to that? We’ll have to wait and see. Expect the new look to be revealed by the NHL Draft at the latest, taking place June 21 and 22 in Vancouver.

The Canucks have a lot planned for their 50th anniversary season, with details likely to begin trickling in over the offseason. The high point will be whatever night the Canucks choose to honour Henrik and Daniel Sedin, who will be getting their numbers retired.