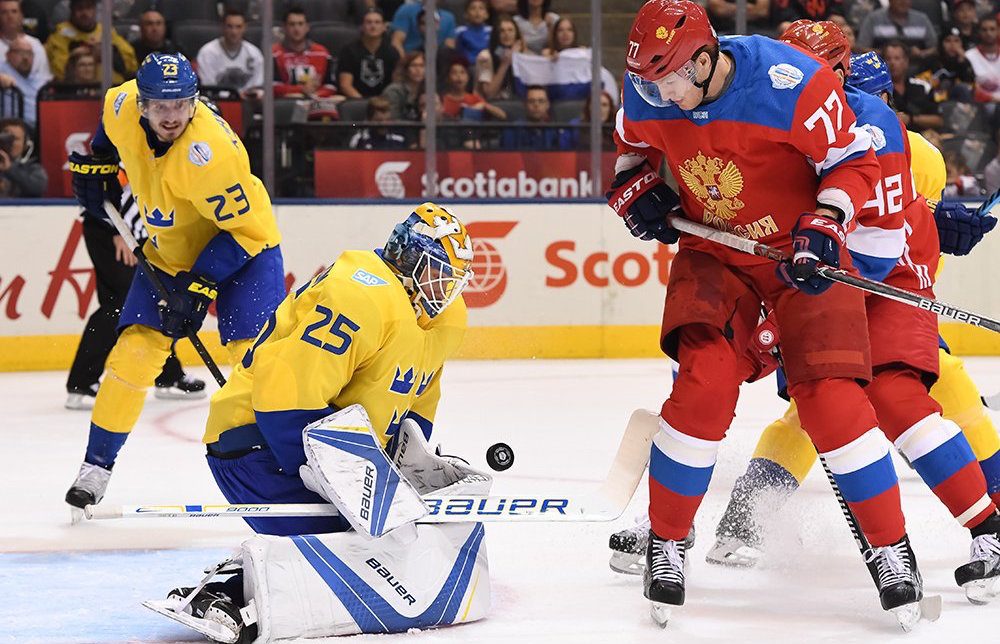 The focus of Canucks fans heading into the World Cup of Hockey was how Loui Eriksson would perform on a line with the Sedins, but for at least one night, Jacob Markstrom was the star of the show.

The Canucks goaltender got an unexpected start in net on Sunday, being thrust into the crease after Sweden’s starting goalie Henrik Lundqvist couldn’t play due to illness.

Sweden really are team #Canucks today with Markstrom in net plus the Sedins and Eriksson… so go Sweden I guess!

Markstrom found out that he would start against Team Russia when he arrived at the rink. That’s no easy task. With the likes of Alex Ovechkin, Evgeni Malkin, and Vladimir Tarasenko, up front, Russia is loaded with firepower.

The 26-year-old goaltender was up to the challenge, playing 59:27 of shutout hockey before Ovechkin spoiled his clean sheet. Ovechkin nearly spoiled the win too, scoring a goal with seven seconds left that was disallowed.

“I was crossing my fingers and toes that it wouldn’t count,” Markstrom said sheepishly after the game.

Whether the goal counted or not, this game was another significant moment in the evolution of Markstrom’s career. He stared down the Russians, stopping 27 of 28 shots in a best-on-best tournament.

“I feel really calm and confident in my game right now,” Markstrom said. He looked like it, too. His rebound control was excellent, and he was tracking the puck well. For his efforts, he was named the game’s second star in-arena (and first star on the Sportsnet broadcast).

A year ago at this time the 6-foot-6 goaltender was at Canucks training camp in Prince George answering questions about whether his success in the American Hockey League could translate to the NHL. It seems silly now, but at the time a number of people wondered aloud whether his game would ever translate to the top level.

“He’s taken another step this year,” his Canucks and Team Sweden teammate Daniel Sedin said post-game. “He’s such a great guy, hard working, always happy. He wants to be the guy too, he doesn’t want to be the back-up, he wants to be a number one in the NHL. That’s what he’s working towards and this is a really good sign.”

Markstrom is pencilled in to take over as the Canucks’ number one goalie in a year’s time, once Ryan Miller’s contract comes off the books. If Markstrom has indeed taken another step, that chance could come sooner.

Markstrom’s turnaround from a goalie that John Tortorella was too scared to play down the stretch in 2014, to now, is remarkable. He cleared waivers nearly two years ago and was sent to the minors.

“It was kind of a wake-up call for me, ‘I’m not young and talented, I gotta work hard, I gotta earn every NHL game I play or NHL practice,'” Markstrom said following the win. “I didn’t know if I was going to get called up. I just felt like I needed to bear-down, I gotta work harder.”

“I think our goalie coach in Vancouver (Rollie Melanson) made him work hard,” Daniel Sedin said regarding Markstrom’s practice habits. “Everyone talks about Lundqvist not wanting to let a goal in, but he’s the same way too. He gets mad.”

Markstrom will likely give way to Lundqvist when healthy, which could come as soon as their next game against arch rival Finland on Tuesday.