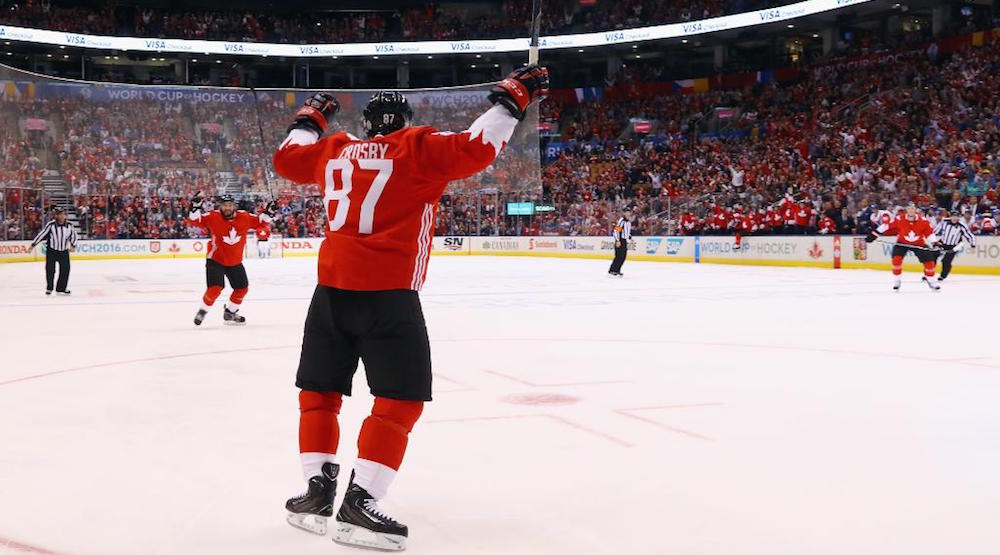 Canada showed why they are everyone’s pick to win the World Cup of Hockey on Saturday, putting the boots to the Czech Republic 6-0 in their opening game of the tournament. They dominated every facet of the game, including on the shot clock with a 46-26 advantage.

“I think if anyone was doubting the way the players feel about this tournament, I think that was proved wrong in the first exhibition game in the first period.”

Canada looked every bit as dominant as they did in Sochi two years ago, a great sign for the home team.

The goals on this night came from six different players: Sidney Crosby, Brad Marchand, Patrice Bergeron, Joe Thornton, Jonathan Toews, and Alex Pietrangelo. Carey Price got the shutout, his third straight in best-on-best, dating back to the 2014 Olympics.

Let’s take a look back at the game with a World Cup edition of the post-game SixPack:

This game got off to a flying start in the first minute, with Carey Price making a great reflex save on a redirect from Ondrej Palat. That allowed the play to go back the other way, with Sidney Crosby being sent in on a breakaway.

Would have been a nice way to start the tournament for Canada – their two best players doing what they each do best – but Czech goaltender Michal Neuvirth came up with a huge save.

The Czechs looked half decent for the first half of the first period, but eventually Canada’s relentless play caught up with them.

2. Crosby not a slow starter this time

Crosby had himself one heck of a game tonight.

His goal was intelligent bank shot from behind the net that bounced in off Neuvirth’s back. His most impressive play was probably his assist on Canada’s fourth goal, where he showed great awareness and patience, feeding Joe Thornton with a great backhand pass for an easy tap in.

Crosby has been criticized for slow starts – at least on the scoreboard – in past best-on-best tournaments. So far so good this time around, as Crosby looks at home with Patrice Bergeron and Brad Marchand.

There was a huge commotion near the end of the game in one corner of the rink between a pair of fans. It appears that one fan was holding up a poster for a majority of the game that ridiculed Crosby. The poster which had “cry baby” written on it, was apparently held up by a Philadelphia Flyers fan.

I'm not a Crosby fan. But I didn't spend $750 to stare at the back of a yellow sign like these losers! #WCH2016 pic.twitter.com/wa9bTWV3pd

Another fan took matters into his own hands, walking down and ripping the sign to shreds. They both got kicked out, with the sign ripper getting one of the loudest ovations of the evening.

The message is clear: don’t mess with Sid.

Not sure what to make of all the empty seats at the Air Canada Centre tonight. I know this tournament is struggling for buy-in from fans, but it couldn’t be this bad, could it? Team Canada ought to sell out the ACC for a practice, how are they having trouble filling the seats for a tournament game?

If you’re a Leafs fan and you pay to watch what they’ve served up for the last ten years, don’t you also want to watch Team Canada?

5. The once mighty Czech Republic

Remember when the Czech Republic was a threat to win gold at best-on-best? It appears those days are long gone.

The Czechs have been hurt by missing a number of their top players, including David Krejci and Jaromir Jagr, but they’re clearly not the force they used to be. The Czechs used to scare the crap out of Canadian hockey fans.

But now? Their team was given polite applause in the pre-game introductions. Nobody’s worried.

This 6-0 loss is the most lopsided loss by the Czechs at a best-on-best tournament since an embarrassing 7-1 loss to Germany at the 1996 World Cup.

Consider that the most lopsided game in Sochi that Canada was involved in was a 6-0 win over lowly Austria, and it puts this game into perspective. Canada narrowly beat Norway (3-1) and Latvia (2-1) as well.

Canada made the Czech Republic look like they should amalgamate with Team Europe next time.

6. Danger ahead for Team USA

Seriously??? That's the best USA can give??? Defending champs if u look at it literally. That's a joke!! Europe embarrassed us. Wake up!!!

After losing to Team Europe earlier in the day, the Americans are in serious danger of not qualifying for the semi-finals. It’s just one game and anything can happen, but USA might need to win their game against Canada if they want to advance.

If things go according to form and Europe wins against the Czechs and loses to Canada, a 2-and-1 record will be required to advance.

In a short tournament where just two teams from each group advance, the pressure rises very quickly.

The Czechs and Americans should bounce-back with better efforts in their next game, which coach Babcock is well aware of.

Canada will try to be even better in their next game against Team USA, who they play on Tuesday.