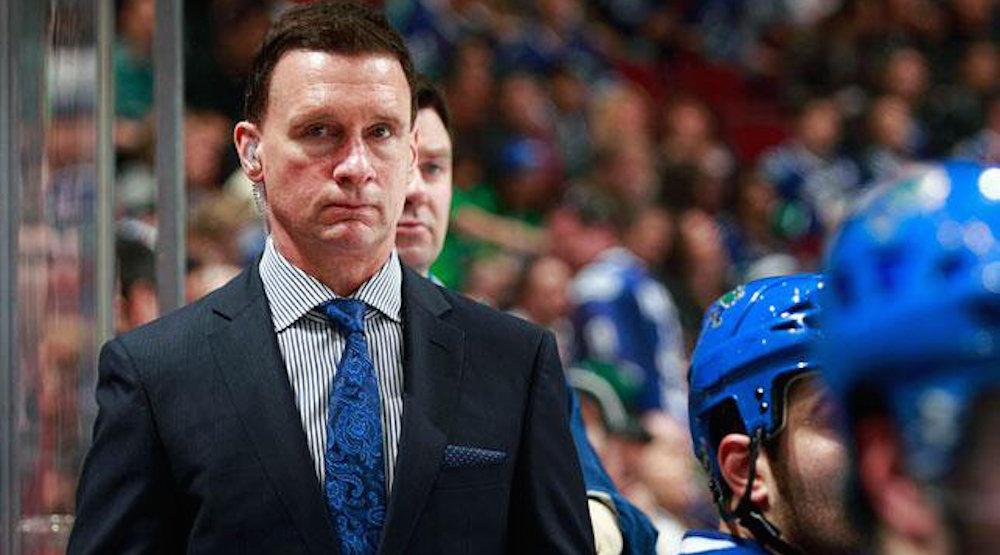 The search continues for the Canucks, who are still looking at available coaches to fill some vacancies in Vancouver and Utica. The Canucks still need to replace assistants Doug Lidster and Perry Pearn who were fired in April, as well as Travis Green’s old job as head coach of the Comets.

Green’s assistant in Utica, Nolan Baumgartner, is the odds-on favourite to replace Lidster and work with the Canucks defencemen.

Concerning Pearn’s old job, an interesting name has surfaced. Sportsnet’s Elliotte Friedman is reporting that the Canucks are interested in bringing back Newell Brown, who was on Dave Tippett’s staff in Arizona for the past four seasons.

Hearing VAN taking long look at Newell Brown for one of its assistant coaching spots. Was in ARIZ last season.

The Canucks, among other things, are in need of a jumpstart to their 29th-ranked power play and Brown, who has 20 years of NHL assistant coaching experience, could be the right man for the job.

After all, he’s done it before.

Let go by the Coyotes in April, the eighth-round draft pick by the Canucks in 1982 is best remembered in Vancouver as the power play guru for the Canucks during their most formidable seasons. The 55-year-old coach was added to Vancouver’s staff before the 2010-11 season, with his most high profile responsibility being in charge of the team’s play with the man advantage.

Under Brown’s watch, an already potent power play got even better.

The Canucks loaded up their first unit power play in 2010-11, moving Ryan Kesler and Christian Ehrhoff up to play with the Sedins. The move paid off, as the Canucks had the highest-ranked power play that season, scoring on 24.3% of their opportunities.

Brown was an innovator, responsible for the neutral zone drop pass that was employed for the first time in 2011-12, that virtually every team in the league has copied since. The drop pass helped Vancouver’s power play to get off to a sizzling hot start that season. They were first in the league with the man advantage, clicking at 24.4% after their game against the Boston Bruins on January 7 (aka ‘Game 8′). The league caught up to them a bit though, and Vancouver finished the year at 19.8%, good for fourth in the NHL.

The wheels really came off the Canucks’ power play in 2012-13, the 48-game lockout-shortened season. They sunk to 22nd in the NHL with the man advantage, clicking at just 15.8%. After the season, Brown was let go.

The Cornwall, Ontario native moved on to Arizona after the Canucks fired him, and helped boost their power play to 19.5%, the most efficient play with the man advantage the franchise had seen since moving to Phoenix in 1996.

Despite minimal talent to work with, the Coyotes improved to 20% on the power play in Brown’s second year, before settling down to 17.7% and 16.2% in years three and four.

Can Brown help the Canucks? He’s not a magician, so getting back to 2011-level power play efficiency isn’t likely, but you’d be hard-pressed to find someone more well-suited to try. The Sedins aren’t the same players as they were in their heyday, but Brown knows their strengths well. The twins are playmakers, and they need to be surrounded by smart players and shooters.

Would Brown pair right-handed sniper Brock Boeser with Henrik and Daniel? How would he utilize Alex Edler and Troy Stecher? Where does Bo Horvat fit in? These are massively important questions for the Canucks if they hope to improve their play on the ice next season.