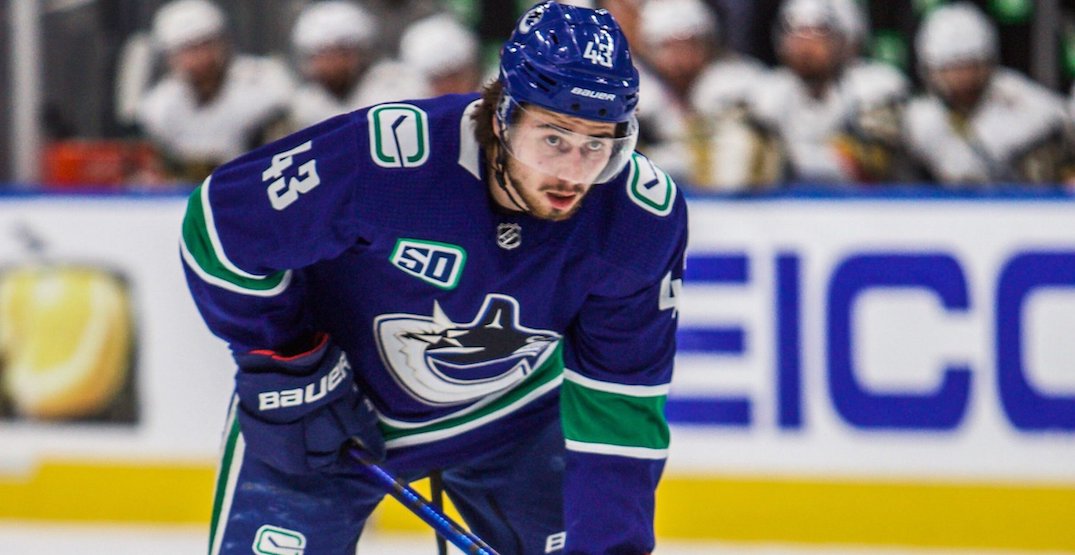 What a coming-out party these playoffs have been for the Canucks rookies.

Oh, and for the playoff-rookies as well.

Although Elias Pettersson and Jacob Markstrom are beyond their first NHL seasons, this is the first chance they’ve had to prove their worth in the postseason.

These playoff-rookies have been up to the task for the Canucks, highlighted by this smattering of impressive facts below.

Two of the best rookie defenceman to enter the NHL over the last 25 years have shone brightly in the playoffs as well.

So it should come as no surprise, that they’re battling each other for a spot in the record books.

Hughes is the most talented defenceman in Canucks history and poised to smash records in short order.

Take these two factoids, for instance. With 14 points, Hughes is one point away from tying former Canucks defenceman Jeff Brown’s franchise record of 15 points in a postseason.

If Hughes can register another point, he’ll tie Gerald Diduck for 10th place in franchise history with 15 playoff points.

It took Diduck 47 games to hit that mark. Hughes, to this point, has played 15 playoff games.

Something tells me he’s going to climb that list awful fast. Currently, Jyrki Lumme holds the franchise lead with 40 playoff points in 72 games.

It never gets old hearing Pettersson mentioned in the same breath as players like Sidney Crosby and Wayne Gretzky.

Well, that’s where Pettersson finds himself after registering 18 points in his first 15 career playoff games.

Continuing his highly impressive 2020 postseason display tonight, Elias Pettersson's game winner for the @Canucks in Gm5 has him now tied for 7th on this list of notable young centres' performances during a successful postseason run for their teams pic.twitter.com/nZQDeZaaA6

Of course, these Canucks were aided by four extra “play-in” games that counted towards playoff statistics, but Pettersson is etching his name on the franchise lists in a number of ways.

His four playoff goals are one away from being tied for the single-season franchise record of five in one postseason. Trevor Linden, Greg Adams, and Daniel Sedin are tied for that record.

5. Playoff debut for the ages for Demko

Many goalies end up debuting in the playoffs every year, but not many enter the postseason in as memorable fashion as Thatcher Demko did earlier this week.

Thatcher Demko joined some elite company with a 42-save performance to help the @Canucks stave off elimination. #NHLStats #StanleyCup pic.twitter.com/oUxuBfdKWF

Demko became the first goalie in 23 years to make more than 40 saves in an elimination game, becoming the first goalie to do so since former Hart Trophy winner Jose Theodore did so in 1997.

Only a select few Canucks goaltenders have enjoyed success in the NHL playoffs.

And success in this situation, is a relative term.

Markstrom actually accomplished this feat with his Game 4 overtime win against the Minnesota Wild. Yes, only five Canucks goaltenders have registered more than two playoff wins in franchise history.

With his eight playoff wins thus far, Markstrom has the most wins by a Canucks goaltender in a single season without making it to the Cup Final. Roberto Luongo (15), Kirk McLean (15), and Richard Brodeur (11) are ahead of him.

That didn’t take long, did it?

After coaching to the Canucks to nine wins so far in these playoffs, Travis Green is now fifth all-time in wins by a Vancouver coach in the playoffs. He’s three wins away from tying Marc Crawford and Roger Nielson for fourth. Alain Vigneault holds the franchise record with 33 wins, while Pat Quinn had 31.

It might not be very long, however, until Green cracks the top three in franchise history.