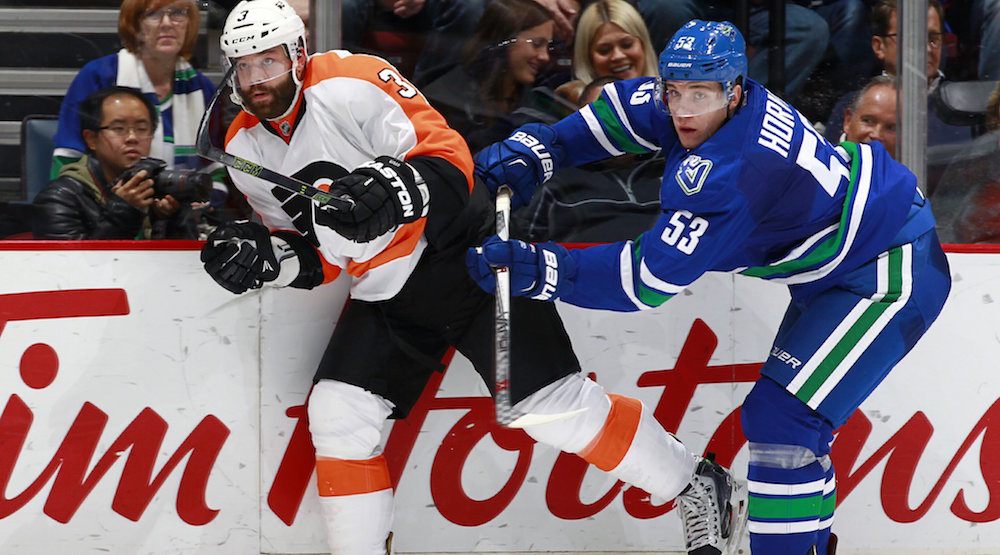 Was that a loss or a win?

On the scoreboard it was a 3-2 regulation loss to the Flyers, but to many Canucks fans it could be the biggest win of the season.

The weekend swing against Calgary and Philadelphia took on that crazy level of importance after Jim Benning basically declared he’d base the team’s future on the five games before the trade deadline.

The first three – against St. Louis, Calgary, and Philly would determine what he’d say when sitting down with trade candidates Burrows, Hansen and Miller during the 5-day break that starts Monday.

Sunday’s loss made their record 1-2 over the crucial three. You can’t argue with those numbers can you?

If you’re into long term success for this team, and you want them to add draft picks or prospects at this year’s trade deadline, you better hope not.

As of this writing, Vancouver has 10 days to get their stuff together and make things happen before March 1.

If they do it quickly, who knows – they might even be able to take advantage of the sellers market they don’t realize exists.

Wouldn’t that be wonderful?

Everyone who watches this team with even a sliver of analytical thought felt starting Ryan Miller on the second half of back-to-backs was a bad idea.

Last time Miller got the unscheduled start, it was a 4-3 loss to Boston in a Saturday morning game.

Everyone knows Miller’s worse when he’s not rested – Jeremy Davis wrote an article showing evidence of that last week – so it’s becoming one of life’s great mysteries that Willie is oblivious to it.

After Sunday’s game, Willie was asked why he went back to Miller again. His answer explains why I titled this section the way I did.

“I thought he played pretty good the night before. You got a guy playing like that – he played good in Pittsburgh the game before that. He’s a good goaltender.”

He continued not getting it…

“It’s interesting because it doesn’t matter who you start. If we’d started Marky, guys would be wondering why we didn’t go with Millsy because he’s playing so well.”

No. No no no. If you started Markstrom, no one would wonder. They’d know you’re starting the fresher goalie on back-to-backs, and that you’re going with the smart choice.

Really, you have two starting goalies in Miller and Markstrom so no one with half a brain would question the decision. They might question the result, but that’s different.

Anyways, let’s look at the results.

Would a rested Miller cover that puck? Maybe.

Would a rested Miller do better with that rebound? Probably.

The third one – a Wayne Simmonds deflection on the power play… he probably didn’t have a chance on that.

Miller also made this save with about two minutes left to keep the Canucks in the game, so he certainly wasn’t a disaster.

Would Vancouver have been better off with Markstrom? No idea. All we know is they started the tired goalie – meaning they gave themselves a lower chance of success – and they lost.

For the second straight game, the Canucks rolled out Jayson Megna on their first unit power play.

Megna, for his part, did as well as you could expect a 27-year-old fourth-liner to do on your top power play unit. Meaning he didn’t do much at all.

The most ridiculous thing about Megna on that unit is Hansen – a guy who has a proven track record playing with the Sedins – is getting no power play time at all.

Want Willie’s explanation? (If you know what’s good for you, you don’t)

Why Megna on the power play? Willie: “He’s a right-handed shot.” Why not Hansen then? Says Hansen is more of a rush scorer.

I am a right handed shot. I’m really slow on skates. Does that make me a better power play option than Hansen?

Being a “rush scorer” is a hindrance?

At least he’s some sort of scorer… can anyone say that about Megna?

And what the hell is a rush scorer anyway?

3. Look who played with the Sedins

Just when you’d given up on Willie making a lineup decision you’d approve of, with 10 minutes left in the game, he juggled his forward lines.

Even more perplexing, he went to a combination that’s had an extreme amount of success in the past – one fans have been begging to see all season long.

@omarcanuck
Benning: “We haven’t played Burr with the Sedins yet?! There’s 5 days left!

They looked great, by the way. Burrows forechecked, he retrieved the puck, and he moved to the right places.

None of Sutter, Megna, or Eriksson have shown they can do that with the twins all season.

The more I think about it, the more I believe it might have been Willie’s final send off to a guy who’s given so much to the Canucks over the years – one last chance for one of the best lines in Canucks’ history to play together.

Sure doesn’t look like Hansen’s trying to facilitate a trade here.

But later he popped in this goal. Maybe he realized it wouldn’t be fair to Horvat to miss this after all the work he did.

Watch it yourself… right at the very end of this gif…

Couldn’t have said it better myself.

6. Is Sutter worth his salary?

Jeremy Davis wrote a great article at Canucks Army analyzing if Brandon Sutter is worth his $4.75M annual salary.

You should read the whole thing when you have some time, as J.D. II breaks down every trait seen as a positive in Sutter’s play, and explains why he’s not worth the money.

One of the best parts was this paragraph on his goal totals.

The overarching point here is there Sutter’s goal totals have been, in a way, manufactured by Willie Desjardins insistence on playing him so much. Those goal totals then reinforce Willie’s notion that Sutter is a strong offensive player, and Jim Benning’s notion that Sutter is worth north of $4 million. The massive amount of ice time is obscuring the fact that Sutter is scoring at the rate of a middle six forward, then run out on to the ice over and over until he becomes a 20-goal scorer by sheer stubbornness.

He also explained that Sutter’s inability to prevent goals makes his overall payoff a net negative.

…for every two goals he is on the ice for, he’s on the ice for three against. When you consider that this player averages the fourth most 5-on-5 time on ice per game on his team, it’s no wonder that the Canucks struggle to keep their heads above water. One of their most used players is an anchor dragging them under.

Davis went through a list of NHL players compare closely to Sutter. Their average salary is just under $2M, which is $2.4M less than Sutter’s being paid.

Another thing you shouldn’t forget: Nick Bonino – the guy they traded for Sutter – is paid $1.9M, and he’s the third-line centre on the Stanley Cup champions.

Note: Thanks to Ryan Biech for his help with the gifs in this post.