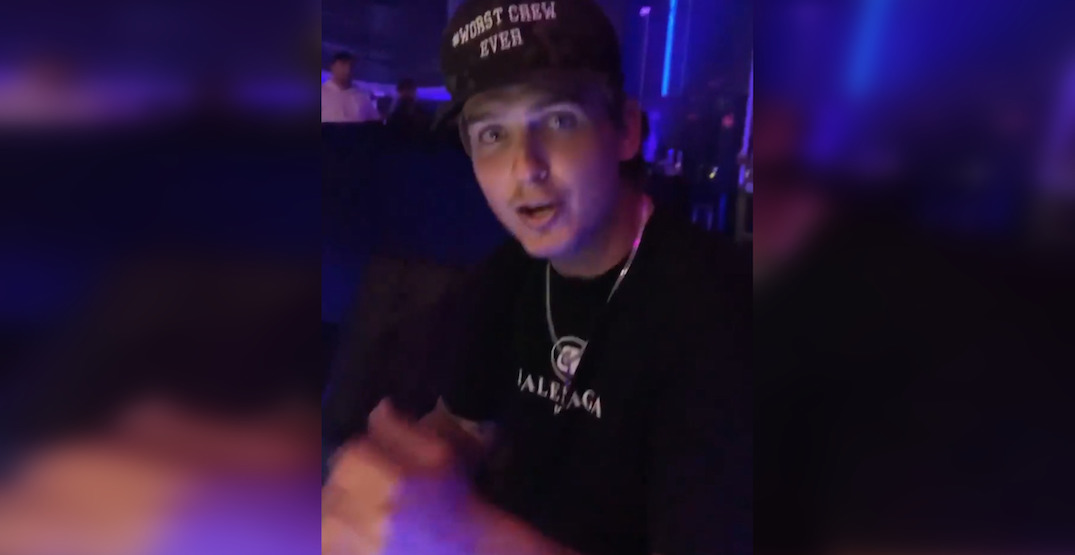 Without free agent signings to criticize, Canucks fans had something else to debate on July 1 this year.

A video of Jake Virtanen enjoying a night out at Celebrities Nightclub in Vancouver circulated on Wednesday (it has since been deleted), and it wasn’t long before his name was trending on Twitter.

Nightclubs are open? Is this irresponsible? Isn’t he supposed to be in the bubble?

And, what about that hat?!

Let’s start with the hat, which was the only thing everyone agreed on. It was glorious.

Virtanen and his buddies were wearing #WorstCrewEver hats, which is a shot at Brendan Leipsic, who blasted Virtanen in a leaked Instagram chat, which ended up costing Leipsic his job with the Washington Capitals.

Virtanen, it should be pointed out, was well within his rights to visit Celebrities. So unlike when he filmed himself while driving, he wasn’t breaking any laws. The nightclub is open legally, following many strict guidelines to promote physical distancing.

Some of the new rules for the club include the following:

So, this wasn’t exactly a night out like it used to be.

The 23-year-old is also not in any sort of quarantine at the moment, as he stayed in BC during the break. Virtanen also hasn’t joined his teammates at Rogers Arena for Phase 2 of the NHL’s return to play plan, which is voluntary.

And yet, the optics don’t look great.

Daily Hive can confirm that the video has been addressed internally, between the Canucks and Virtanen. Virtanen will also be tested before he rejoins the team for training.

Virtanen has a lot of growing up to do, his priorities are the drink, not the game/team. If the Canucks suspend Virtanen for the “playoffs”, I won’t be mad. Fans trying to justify/defend him probably don’t practice social distancing or wear masks anywhere, so fuck them too 👋

Did Jake break the rules? No.
Should there be return to play? Also no.

To all you nerds saying leave Jake alone. Drancer said it right, thisnis the 2nd time Virtanen has done something like this knowing the backlash. He and his friends should’ve exercised discretion if they wanted to have fun before going into a bubble. #canucks

Canucks twitter is so embarrassing.. who gives a shit that Virtanen was out.. he has a life. It’s no different then going to a restaurant, mall or grocery shopping.. He’s getting tested for COVID.. stop being so embarrassing!

Take it easy on Virtanen, he doesn’t know any better, he is just a golden retriever

Lol this Jake stuff is ridiculous. When are we gonna stop shitting on own players more than other team’s players? I remember growing up it felt like an us vs them mentality. In 2011 it was embrace the hate. Now in 2020 it’s cancel our own?? Wtf. Relax and enjoy the ride. #Canucks

Who cares if Jake Virtanen went out partying, it’s his life not yours

Why are people mad that Jake went out? Im at a restaurant right now with my mom, what’s the difference?

Jake Virtanen wants to play hockey and party. He’s 23. He scored 18 goals last season. If the place was open, it’s because Dr. Bonnie Henry said so. Calm yourselves.

The focus should be on Jake’s great hat, not that he was at a club.

Can we talk about Jake Virtanen shading Brendan Leipsic?

On one hand: Jake Virtanen is getting drunk at a club during a pandemic.

On my other hand: Jake Virtanen is dunking on Liepsic. pic.twitter.com/cJoEfhTc1U