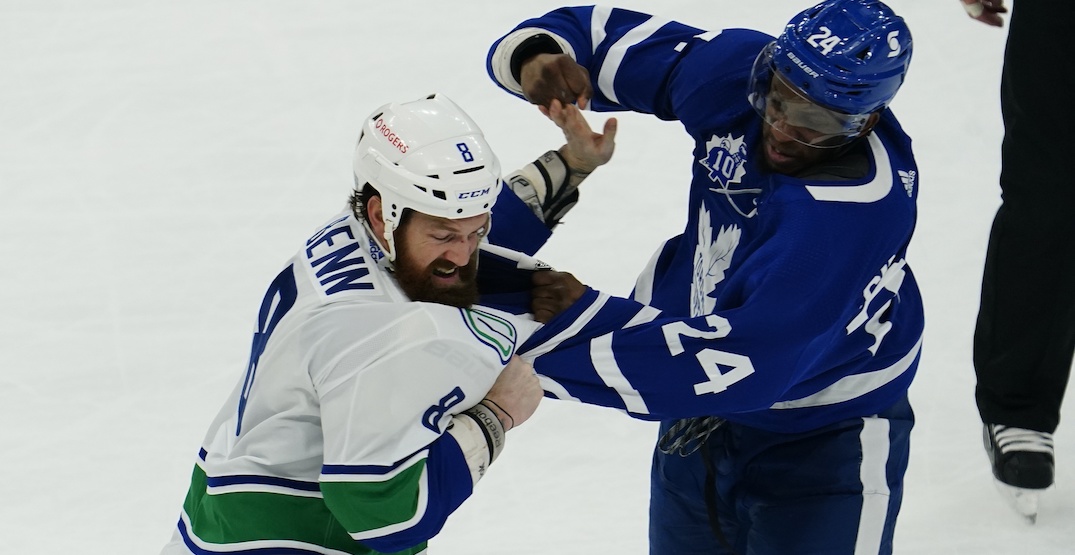 The Toronto Maple Leafs have created a lot of enemies during their century-long run in the NHL.

Some are natural, like the English-French divide that exists with the Montreal Canadiens. Some are more recent and fuelled by playoff history, such as the provincial matchup against Ottawa or the heartbreaking Game 7 defeats they’ve suffered a trio of times this decade to Boston.

And then there’s the Vancouver Canucks, who exist entirely in a class of their own. There’s little playoff history (outside of a five-game series 27 years ago), no divisional history (outside of this shortened season), and most importantly, a continued one-sided hatred that transcends any form of rational thought. Most years, of course, there’s just a standard home-and-away series over the course of 82, but we’ll get to see these two play each other nine times this season.

Fresh off their first meeting of the new campaign, the Leafs and Canucks looked in two completely different leagues on Thursday night, with Toronto’s 7-3 win being led by a Jason Spezza hat trick as well as a pair of goals from Auston Matthews. The Canucks managed just 19 shots on net.

But regardless of how the game went — and the Canucks will get two more chances to redeem themselves immediately with rematches Saturday and Monday night — there has always existed a BC-based distaste towards the Leafs that makes it seem like there’s some larger rift at hand.

Whether it’s complaining about start times (that allow a wider audience across the country to watch the game), arguing about the Toronto media (often completely unaffiliated to the team), or trying to convince no one in particular that Elias Pettersson’s 59 career goals have somehow made him the game’s premier scoring threat, every time the Leafs play the Canucks, it’s guaranteed to bring up just the most asinine and circular arguments from the Vancouver side of things.

So whether you’re a Canucks fan, media member,  or hey, even working for the team in some capacity, here’s my plea: just stop pretending that there’s anything remotely close to the disgust you feel coming back at you from the Toronto market.

The Leafs have other things to focus on

Death, taxes, and other fans complaining about the Leafs. You can find a segment of fans in many markets outside of Vancouver — Ottawa, Buffalo, Edmonton, to name a few — that will tell you they hate the Leafs more than any other team.

A recent SBNation survey unsurprisingly put the Leafs as the most hated Canadian outfit in the league. And while you’ll find reasons to dislike Pittsburgh (too much success?), Boston and Philadelphia (a history of bending the rules) or Chicago (dare I say, outdoor games?), the hatred for the Leafs is just kind of… there.

In normal times, it’s tough for Toronto to pretend that the Vancouver games are usually circled on their calendar for any good reason. They’re an out of conference opponent that happens to play on the other side of the same country. Big whoop.

The Leafs don’t control their own narrative

Though it is true that major stakes in the Leafs’ parent company of Maple Leafs Sports and Entertainment (MLSE) are held by media conglomerates Bell and Rogers, it’s not like Sheldon Keefe or John Tavares feed the media their headlines and ask to be splashed on the front pages of every website.

The Leafs are a collection of 25-ish hockey players, and then other people have opinions about them that drive revenues. That’s all it is.

The Leafs are generally very bad

It wouldn’t be much of a stretch to call the post-1967 Maple Leafs the biggest disappointment in professional hockey history.

Forget winning the Stanley Cup, forget making the Final (neither of which they’ve done since there were, uh, six teams in the league), the Leafs have won their own division exactly once since… 1938.

They’ve had multiple stretches of incompetent management and ownership groups for the better part of 60 years.

Even this Leafs core of players has seen various individual successes, but still face struggles every time they’ve managed to reach the postseason. The current Toronto roster has plenty to feel good about, but it’s well past the time in the franchise’s tenure to pretend anything other than playoff success matters.

Speaking anecdotally, but I have never met a single person from Toronto that’s visited Vancouver and disliked anything but the rain and occasionally the public transit.

You live in one of the most lovely places you could end up in! You’ll find yourself on nearly every list of great world cities, usually slightly above Toronto! You’ve won! That’s the dream! It’s okay to have two cool cities in one country!

Please come visit when non-essential travel is safer so we can stop yelling about a non-existent rivalry.