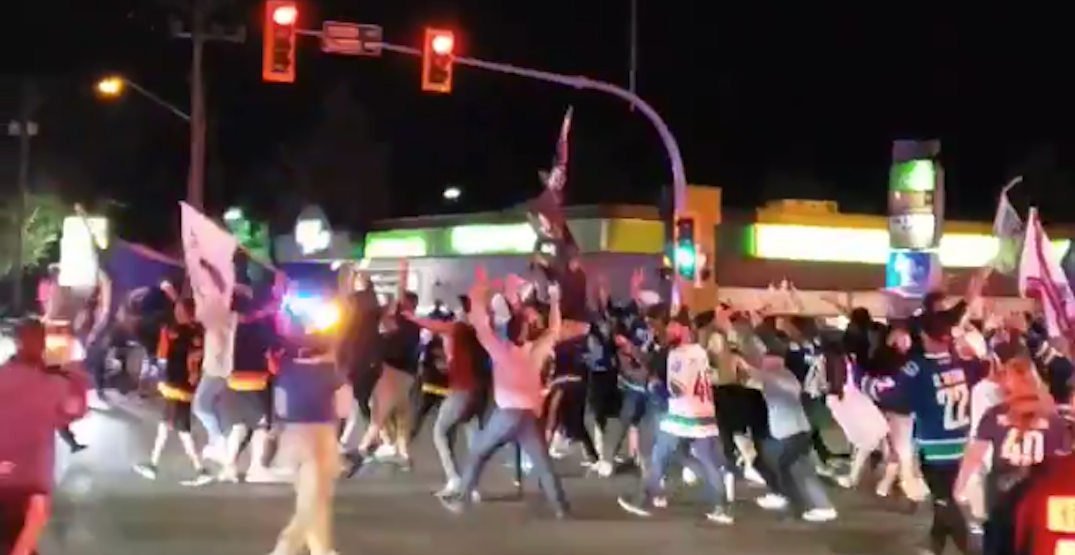 With just hours to go until the puck drops for Game 7 of the Stanley Cup playoff series between the Vancouver Canucks and Vegas Golden Knights, Surrey RCMP are asking fans to “reconsider” gathering at the intersection of Scott Road and 72nd Avenue in Surrey – a location that has long been a tradition for Canucks fans.

And with the Canucks playing in their first Game 7 in nine years, it’s safe to say that a series-clinching win by the team tonight will once again bring out the crowds.

Of course, this means that police officers from both the Surrey RCMP and the Delta Police will be on scene as well, and while crowds are expected, police are also asking people to “reconsider” attending the intersection in the midst of a global pandemic, and instead “celebrate in a manner that keeps everyone safe,” primarily by staying home.

For those who do decide to celebrate at the intersection, Surrey RCMP said they “will be taking a measured approach” to the situation.

“Officers will be on hand enforcing the Criminal Code, and other provincial statutes including the liquor act,” police said. “Officers will also be mindful of current COVID-19 public health orders, and will be monitoring the gathering for compliance.”

After climbing out of a 3-1 series deficit, the Canucks have seemingly taken the momentum back and will look to clinch the series tonight.