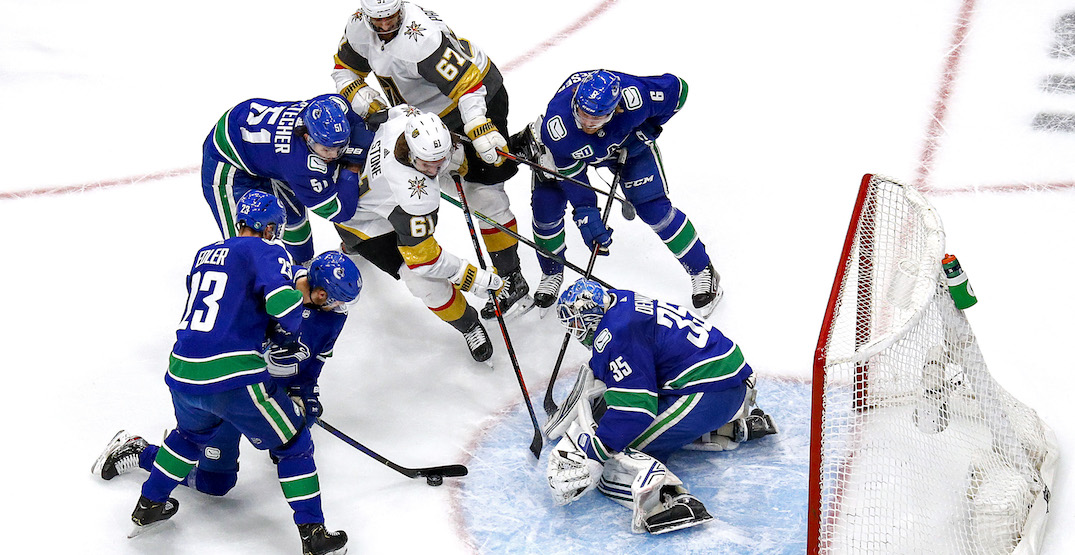 Thatcher Demko has done it again!

For the second game in a row, Demko got the nod with starting goaltender Jacob Markstrom dealing with an undisclosed injury and boy, did he deliver.

The 24-year-old once again came up huge between the pipes, backstopping his team to a 4-0 shutout victory in order to even the series at 3 wins apiece and force Game 7.

Demko was perfect in every way, saving the Canucks season for the second time in three days.

Since making his first career playoff start in Game 5, Demko has faced a whopping 91 shots, turning aside all but one.

With the shutout, Demko becomes the first Canucks goalie to record a shutout when facing elimination since Kirk McLean back in 1992.

Adding to the accolades, he set a league record for most saves in a playoff shutout that did not go to overtime.

“Thatcher’s been our MVP both nights, he has been standing on his head back there and making some amazing saves,” Jake Virtanen said of his goaltender after the game.

“He’s making it easy for us to win games.”

When asked about his own performance following the game, Demko implied he is already looking ahead to Game 7.

“That’s hockey. It’s the best sport in the world for that reason, there’s a lot of ups and downs. Backs against the wall, our guys are stepping up, but the job isn’t done yet.”

With everything that can be said about Demko’s performance, a different Vancouver Canuck continued to drop jaws with his superior play — something that has almost come to be expected on a nightly basis.

Rookie defenseman Quinn Hughes turned in another impressive showing on both ends of the ice in Game 6, with arguably his best highlight coming when he wired an absolute laser beam to put Vancouver up 3-0.

Hughes finished with two points on the night, bringing his postseason total to 16.

With 16 points to his name, he sets the record for most points by a rookie defenceman in a single postseason in NHL history – leapfrogging fellow 2020 Calder Trophy finalist Cale Makar with the Colorado Avalanche.

Quick starts to both the first and third periods for Vancouver proved to be the difference-maker on the scoreboard.

Virtanen got things going for the Canucks just 2:50 into the opening frame after his linemate Tyler Motte charged in an poked the puck off the end boards, setting up the wrap-around finish.

Of the 18 combined shots in the 1st period, this is the only one that found the back of the net 🔥

Then early in the third, Hughes turned on the jets, burned half a lap around the ice, and made a slick pass to J.T. Miller.

Miller made no mistake, burying it behind Vegas goalie Robin Lehner just 63 seconds into the period to put his team up 2-0.

Miller finished the game with two points as well, Bo Horvat added an empty-netter to make it 4-0 and…well, the gritty Tyler Motte stood out in more ways than one.

After climbing out of a 3-1 series deficit, the Canucks have seemingly taken the momentum back and will look to build on it in Game 7, set to go Friday night.

Also, if someone can check on Vegas for us, we need to know if they are okay.

It will be win or go home for both Vancouver and Vegas when they meet on September 4.

The time of the game has yet to be announced by the NHL.