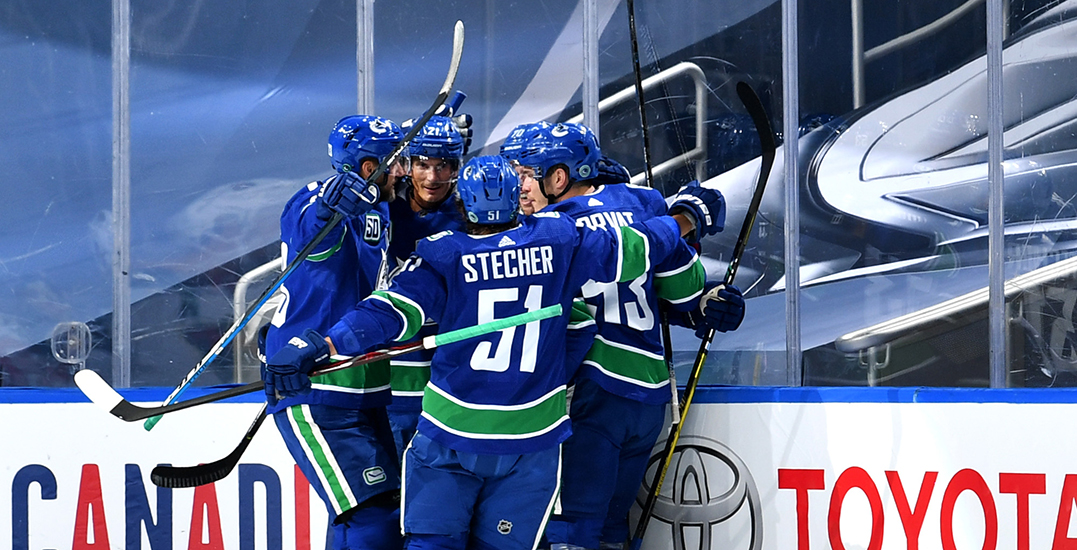 It was a wild ending, but the Vancouver Canucks pulled away with a victory after Tuesday night’s match against the Minnesota Wild.

The Lotto Line, composed of Elias Pettersson, Brock Boeser, and JT Miller, played a huge role during the game. Miller delivered with a goal and an assist and Boeser continued to be an offensive threat, tallying a goal in the second period.

Not only does the win bring back the qualifying series to even but it was the first postseason win by the team in 1,930 days. The last time the Canucks won in the postseason was during their series against the Calgary Flames in 2015. On April 23, 2015, Vancouver took Game 5 of the series against Calgary but ultimately lost the series the game after.

Needless to say, Canucks fans were buzzing on social media with plenty of reasons to celebrate.

Thank you @Canucks for the late birthday gift yesterday! Only game ever to be played on Aug 4th and it’s a dub. #Canucks

It’s been 8 long yrs @canucks fans but the boys got us a playoff win. Have some drinks tonight and celebrate. It’s been hellish. We the loyal fans deserve some happiness. Especially in 2020. Go #canucks Go pic.twitter.com/g94P6pJxXX

Too bad Petey wasn’t around for the Bruins in 2011. He could have helped @kbieksa3 lay some hurt when the refs put their whistles away. Oh… that and their added scoring too @canucks #weareallcanucks pic.twitter.com/y3J0uyCnCs

@Canucks Thanks for winning on my birthday today, guys. Cutting it a little close at the end there, but hey…a win’s a win. 👍

Well done men. The Wild can’t handle an offensive attack inside the circles. Way to shove it down their throat.

Next Game… Hitters.. plant that Fiala figure skater into pancake batter. He’s made of glass. Little whiney baby can’t take a hit or stand up for himself.

W!!! I could’ve done without the last dozen or so seconds, tho (my heart!)

Ik he gave a late one up, but…

Nice to see a @Canucks win on TV, been a long time, but it was a tough game. Weird to have playoff hockey after no real season. And no real fans in stands. Canucks seem a bit grittier this year. Late goal for Minn made it 4-3.

Canucks have never lost a playoff game when Loui Eriksson is in the lineup.

The day after is so much better after a win #canucks

Boeser was on fire tonight, Petey toughed out the constant abuse and everyone else contributed. Canucks deserved the win but do they always have to blow a big lead? My heart can’t take much more❤️

Anyways this is the mood of the night bc my Canucks bbys held onto that win 🥺
pic.twitter.com/sBb5gK94hE