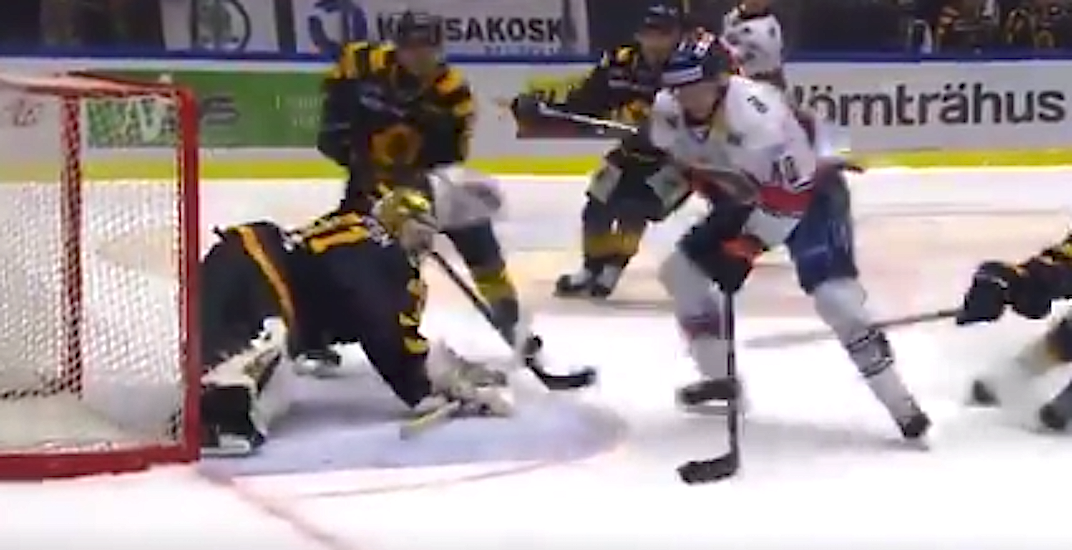 The Canucks prospect has had an outstanding season after being picked fifth overall by Vancouver at the NHL Draft last year.

Winning the scoring title and breaking a 42-year-old record for points scored by a junior-aged player in the top professional league in Sweden, the 19-year-old has been turning heads all season.

Pettersson’s impressive play has continued into the Swedish Hockey League Final, where his team, Vaxjo, won the first two games of the best-of-seven series this week.

The lanky Swede scored a goal and two assists in Game 1. He added two more points in Game 2 on Thursday, including this beauty:

Every goal he scores seems to be of the highlight-reel variety.

Pettersson now has 14 points in 11 playoff games, matching the totals Henrik and Daniel Sedin put up at the same age – in two fewer games.

#Canucks prospect Elias Pettersson with 1G & 1A today for Vaxjo.

The SHL record for playoff points by a U20 player is Axel Holmstrom (a seventh-round pick by Detroit, currently playing in the AHL), who scored 18 points in 15 games in 2015.

Given that Vaxjo has outscored Skelleftea 11-0 through two games, there’s a pretty good chance this will be a short series. That may mean just two more games for Pettersson to match the record.

Pettersson’s SHL career could be coming to an end as soon as Sunday, the date of Game 4 of the Final. The highly skilled prospect is expected to make the move to North America next season to play with the Canucks, or possibly the Utica Comets.