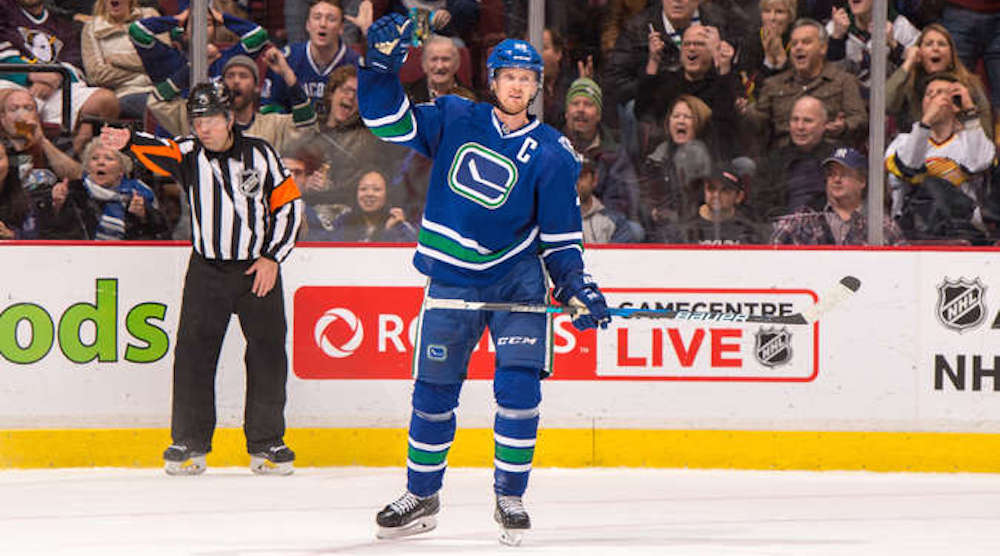 The final game at Rogers Arena in 2016 was one to remember.

It wasn’t a regulation win, but the Vancouver Canucks completed the comeback against the Anaheim Ducks, winning 3-2 in overtime.

Henrik Sedin scored the overtime winner, while Ryan Miller stopped 24 of 26 saves for his ninth win of the season.

It was also a milestone night for Alex Burrows, playing in his 800th career NHL game.

Did we mention Alex Burrows is playing in his 800th @NHL game tonight?! Congrats Burr! pic.twitter.com/ukN4XTPODr

We’ve chronicled the struggles of the Canucks power play for what feels like all season long. It really feels like beating a dead horse, but when the team allows as many (or more) chances as they get with the man advantage, it isn’t an advantage anymore.

The Canucks power plays have often seemed to kill their momentum this season, and that was the case again tonight, at least early on.

After one unsuccessful power play, the Canucks got a second opportunity early in the first, but the Ducks were the ones capitalizing on a shorthanded goal from Ryan Getzlaf.

The goal not only got the Ducks on the board first, but it sucked the momentum away from the Canucks, who then spent most of the rest of the period in their own zone.

Casual looks on the Ducks players as they skate to the penalty box because they know it doesn't matter.

The Ducks doubled their lead early in the second period when a point shot from Hampus Lindholm squeaked through Ryan Miller.

Out came the challenge from Willie Desjardins, who thought there was goaltender interference on the play.

The argument surrounded Rickard Rakell pushing the pad of Miller in front of the net shortly before the puck going in. In the end, the call on the ice stood.

I don’t think the goal should have been waived off, though play-by-play broadcaster John Shorthouse predicted it would.

Now, the Canucks found themselves down 2-0 and without their timeout.

The second power play unit (aka Loui Eriksson) has looked better than the first in the last few games. They converted on the Canucks fourth power play to get on the board in the middle frame. Thanks, Loui.

Just seconds after scoring, the Canucks got yet another power play. Lightning would not strike twice, though the first unit did end up getting a few decent opportunities.

4. Miller with a showstopper

With the Canucks trailing 2-1 midway through the game, the Ducks had a glorious chance to double their lead, but Miller had other ideas.

With a pass sent cross-crease and Miller already down, he stretched across with his glove for the crazy desperation save. Corey Perry, who has been snakebitten all season (only seven goals), couldn’t believe his eyes.

That Miller save proved to be huge, as the Canucks wound up tying the game in the third period.

The goal scorer? None other than noted sniper Jack Skille, banging home his own rebound two minutes into the third.

That goal knotted things up at two goals apiece, and after eighteen more minutes of scoreless play in the third, this game was overtime-bound.

You know how everyone always says Henrik Sedin needs to shoot more?

"Loui made a great pass over and I put it in. It hit the middle bar. Nice win for us after a slow start." – Henrik Sedin pic.twitter.com/RwvNmmy3X9

Taking a great pass from Eriksson, the Canucks captain took a half second to settle the puck before snapping a quick wrister over the glove of John Gibson. Nice shot by Hank, who leads the team with 24 points in 37 games.

It wasn’t the back-to-back regulation wins that have been alluding them all year, but the Canucks will be happy with two straight victories over divisional opponents.

Thanks to Omar for this nice little piece of bonus content from tonight’s game.

Kevin Bieksa has spent the past two seasons in Anaheim, but fans in Vancouver still have a love for the former Canuck. Especially this woman, who holds an “I <3 my Sexy Bieksy” sign that certainly wins sign of the game honours.

It’s not sign of the year though. That goes to this beauty.

The Canucks play their final game of 2016 tomorrow on Hockey Night in Canada, 7 pm PT against the Edmonton Oilers.