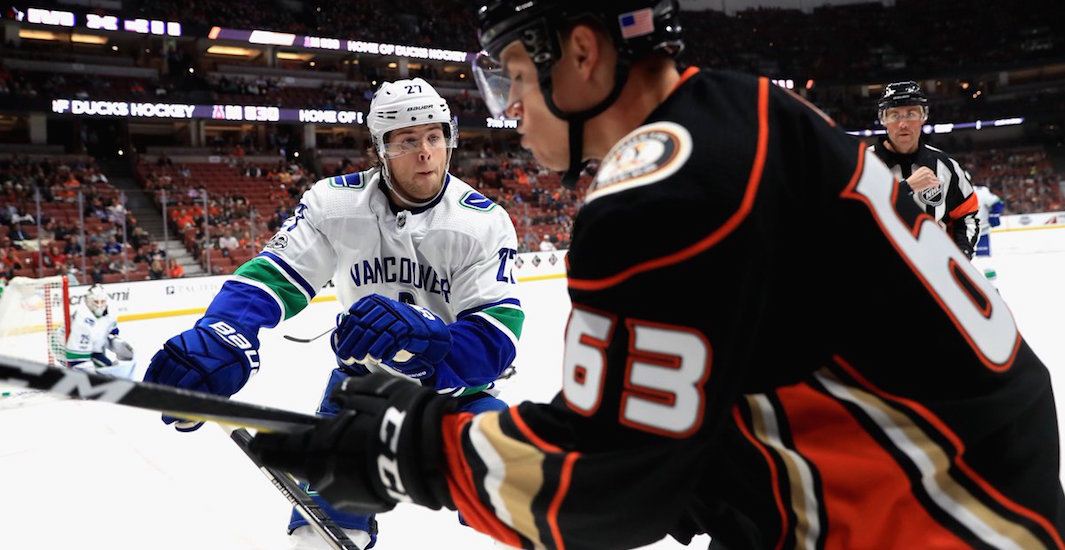 If we were handing out awards for each Canucks game this season, Thursday night’s game against the Ducks would probably just get a participation ribbon.

Sure, the Canucks were there. They physically showed up. But they didn’t do much else in a 4-1 loss in Anaheim.

You could argue the Ducks are a good team, but they are very beatable right now. Ryan Getzlaf is injured. Ryan Kesler is injured. Derek Grant(!) was Anaheim’s first line centre in this game.

There’s no excuse, it was just a bad performance from the Canucks.

It’s going to happen though, and the Canucks need to use this as a wake up call. Things have been going better than most expected this season and there is reason to be happy in that, but this team certainly can’t afford to get complacent.

“This should be a wake-up call for us,” Erik Gudbranson said post-game. “We’ve been outplayed a few games in a row here and we need to pick it up. We made them look really good tonight, we got what we deserved.”

They sure did. Here’s what you need to know.

Thank you Kevin Bieksa for saving the SixPack. The play alone was hilarious, but the context made it even better.

Bieksa was joking prior to the game about Tanev’s own goal against Detroit on Monday.

Juice’s whiffed clearing attempt was a perfect pass to Baertschi, who gladly capitalized on the gift to open the scoring.

It was the setup for the only Canucks goal as well as the funniest moment of the game, so Bieksa takes the Superstar honours.

The Canucks penalty kill was working well earlier in the season, but lately things have took a turn south.

The numbers aren’t pretty over the last three games. 1-for-2 against Detroit, 2-for-4 in Calgary, and again on Thursday, 3-for-6 in Anaheim. That’s a measly 50% success rate.

While 50% might be a passing grade in high school, it’s a major fail in this context.

It needs to be addressed. Too often, guys are losing track of where they should be covering, resulting in wide open looks like this one. 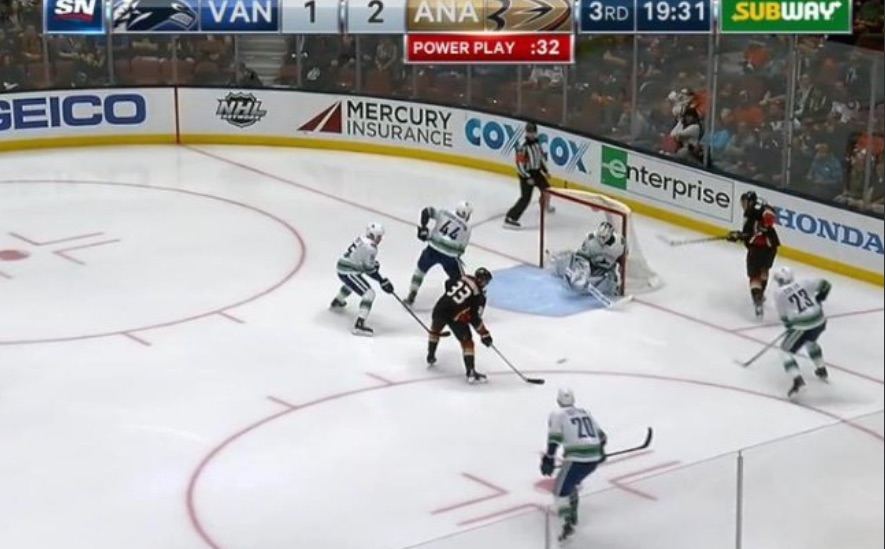 Is it merely coincidence that Tanev came out of the lineup and the Canucks allowed 4+ goals for the first time in 10 games?

Could be, but the Canucks are clearly a better team defensively with #8 in the lineup.

Another thing is clear – Tanev is a better goalie than Edler.

After Tanev’s mad scramble save last game, Edler was back in the lineup on Thursday with the bar set high. He made a good first save on this play but let out a rebound that was cashed in for the first Anaheim goal.

Ok well Edler gets beat cleanly here, that back up job is def Tanev's now pic.twitter.com/b2YhqapG4a

Was that a bullet, or a Thomas Vanek slap shot?

Vanek’s rocket of a goal against the Flames on Tuesday got fans talking, and he nearly launched another rocket in this game.

I’m no coach, but I think they should give the puck to that guy more.

It’s one of my favourite things about Travis Green.

His candid reactions behind the bench are just priceless. He has to be among the league leaders in F-bombs-per-60. Green is never one to mince words in interviews, and the same is true behind the bench.

For Ryan Miller, Thursday night was his first time playing the Canucks since signing in Anaheim over the summer.

He was good when he needed to be, which really wasn’t often at all.

The Canucks directed just 20 shots on goal, and Miller was only in net for 14 of them before leaving the game midway through the third to what appeared to be a lower body injury.

Didn’t seem too serious, Miller actually stayed in at first before coming out, probably realizing the game was meaningless and not worth risking an injury.

From the Anaheim Ducks Twitter, just two former Canucks having some fun in the scrum.

Tough media scrum for @RyanMiller3039, who was asked to answer this pointed, difficult question. pic.twitter.com/BgeqDAQ04x

Speaking of pointed, difficult questions… how about that pass Bieksa?