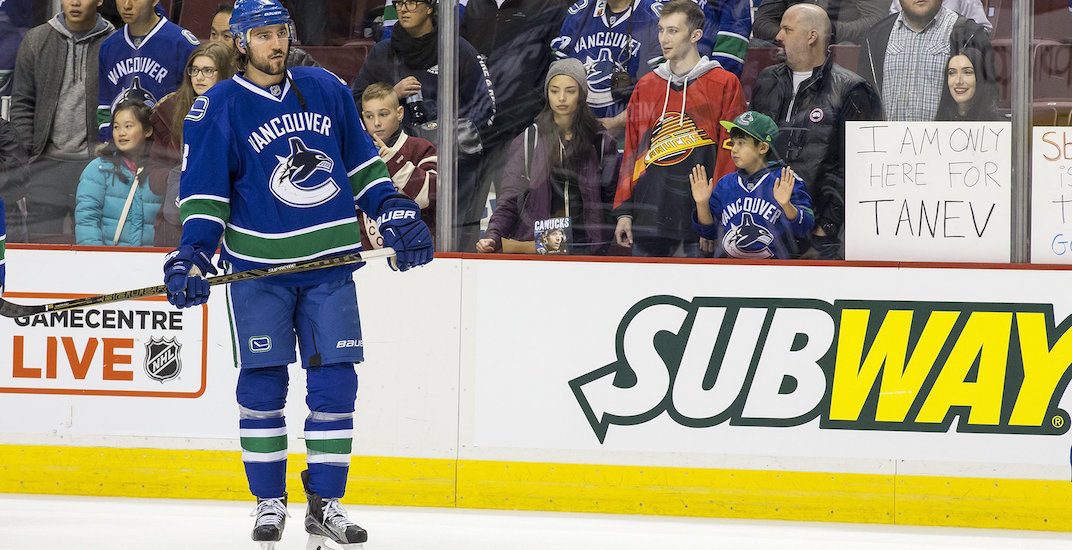 Concerning news from Canucks practice Thursday in Anaheim, as Chris Tanev has flown back home to Vancouver.

Per Coach Green, Chris Tanev has returned to Vancouver. “He’s got an upper-body injury that will keep him out at least the rest of this road trip.”

Edler will play vs. Ducks.

The Canucks defenceman is out with what the club is calling an upper body injury, and though we don’t know the extent of it, it doesn’t look good.

Tanev played 23:19 in Vancouver’s last game in Calgary, and the team had a day off on Wednesday, so it’s hard to come up with a theory as to how he was hurt. But an injury significant enough to cause a player to leave the team on a road trip that doesn’t conclude until Tuesday is a very bad sign.

We’ll have to wait and see on that front, but the Canucks did get some good news.

Alex Edler, who has been out of the Canucks’ lineup since October 12, will return according to head coach Travis Green. Edler’s a leftie, while Tanev shoots right, so it might not be a simple one-for-one swap of defencemen.

One of Vancouver’s left-shooting defencemen will be forced to move to the right side, unless they call someone up from Utica. Erik Gudbranson and Alex Biega are the only healthy right-shot d-men available, and both are ill-suited to be featured in a shutdown role that Tanev played. Troy Stecher – also a right-shooting blueliner – is also injured.

So pick your poison: force a left-shot d-man to play his off-side in a shutdown role, or give it to Gudbranson or Biega. Either way, yikes. Expect a big drop-off without the team’s best defensive defenceman.

Forward Markus Granlund, who skated on Thursday, could also return for the Canucks after missing one game. Brendan Gaunce filled in for him on Tuesday.

Goaltender Thatcher Demko, who is from nearby San Diego, won’t get what could have amounted to a hometown start for his first-ever NHL game. Instead, he’ll back up Jacob Markstrom, who fill face former teammate Ryan Miller in the Ducks net.

Demko will get his chance, and you can certainly understand Green not wanting to take any chances.

All is well with Anders Nilsson, whose wife recently had their baby. Nilsson is expected to be back in the lineup soon, perhaps as soon as Saturday in San Jose.