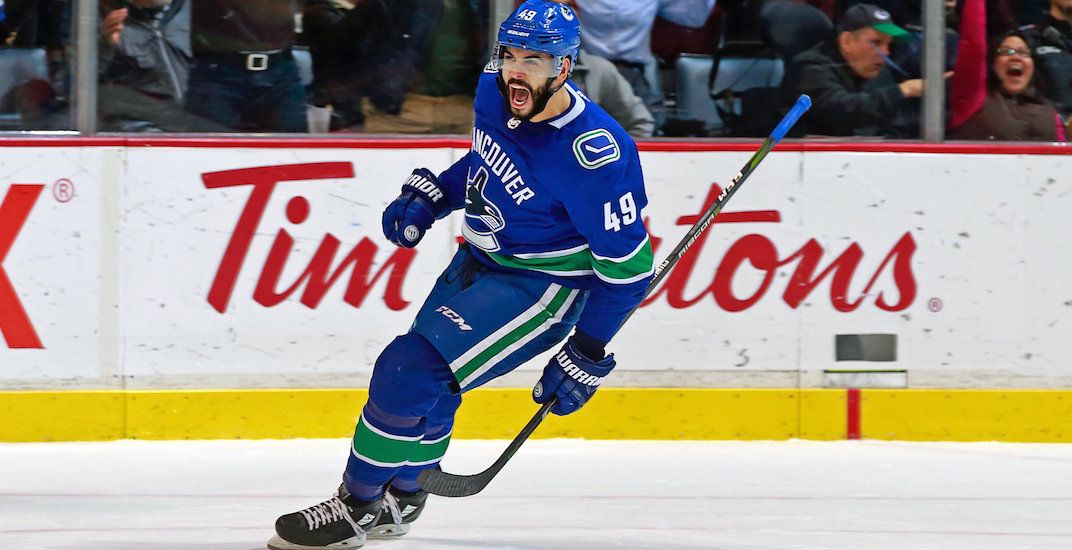 As the 2017-18 season nears its final curtain for the Vancouver Canucks, there’s much more at stake for some players than merely playing the role of spoiler down the stretch.

Darren Archibald, for instance, is playing for his hockey life.

Productive in his role in 18 NHL games this season, Archibald has five points (3-2-5), playing 14:43 per night. His average ice time on the penalty kill (3:06), ranks second on the team among forwards.

But the 28 year-old knows that nothing is guaranteed. Despite leading the Utica Comets in scoring last season and nearly winning a job with the Canucks out of training camp, he wasn’t offered an NHL contract until February.

Scheduled to become an unrestricted free agent on July 1, Archibald doesn’t know what the future holds beyond this season, but the erstwhile ECHL player has had a taste of the NHL and he’s doing everything he can to make sure he’s here to stay.

“I’m trying not to have any room in my game for complacency,” Archibald told Daily Hive following practice on Monday, before the team’s final multi-game road trip of the season. “I’m trying to bring it every night. I don’t want to say that I’ve done enough. I think I’ve had a good showing here. These last 10 games are going to be a good test for me to prove I belong.”

He’s got to go out and make a positive impression every game. Every shift.

His work ethic, commitment to battle, penalty killing prowess, and durability has made him a favourite of head coach Travis Green, who also coached him in Utica.

“I think he’s brought an element to our game that we’ve needed,” said Green. “He’s a physical player, a heavy player. It’s not just physicality when you’re hitting people. It’s physicality on the puck, being hard on the puck, loose pucks in the neutral zone that you know have to get deep, you know the player has to get to the red line and get a puck behind.

“Those turnovers are the ones that really hurt teams. You end up spending a lot of time in your zone, when you’re tired. He’s good in those little areas, he understands the game now. He’s an older player, he understands the importance of certain parts of the ice. Aside from the hitting, and the physicality he’s brought a direct game, a detailed game. He’s been good on our penalty kill. He’s got to fight to be good these last 10 games.”

The Newmarket, Ontario native knows full well that it can be a long road back to the NHL. His 16 games with the Canucks during the 2013-14 season seem like another lifetime ago. Then head coach John Tortorella liked what Archibald brought, but it wasn’t enough to keep him in Vancouver once ‘Torts’ bid adieu.

There were many tough moments from that point forward to where Archibald is today. He’s overcome injuries, and doubters telling him he wouldn’t make it back. The biggest life lessons often have the biggest rewards. That’s what kept Archibald going.

“I think just being committed, and believing in myself,” Archibald said. “It’s not an easy game to play, especially getting sent down to the ECHL. To be able to work my way back up, and get back to Vancouver. It definitely was a special feeling for me, and I’m just working hard to stay here now.”

A veteran of bus rides through small towns, empty rinks, and cheap motels has drawn comparisons to former ECHL product, Alex Burrows, who scraped and clawed his way through 134 games in the minor-pro league.

Archibald sees a little bit of himself in Burrows.

“Yeah, obviously he started at the bottom and worked his way up,” said Archibald. “I spent quite a bit of time in the ECHL my first couple of years. It hasn’t been an easy road. It’s been a bit of a rollercoaster, there’s been some ups and downs. He persevered, and got to the National Hockey League. I guess there’s some comparison there.”

Archibald spent less time in the ECHL (73 games) than Burrows, but has more than paid his dues in the AHL (356 games).

“I try to work on all aspects of my game,” Archibald revealed. “I try not to just be a physical presence out there. I like to think that I’ve got some skill too, and I can put the puck in the net when the opportunity is there. Just working hard everyday on little aspects of your game, fine details, and trying to get better.”

Archibald got a spot on the team this season, in part, because of the absence of Derek Dorsett. While he’s willing to do whatever it takes, dropping the gloves twice in 18 games for the Canucks, fighting isn’t as big a part of his game as it used to be.

The game has evolved, and it’s not a part of the game that Green has demanded out of the 6-foot-3, 212-pound forward.

“It’s kind of a fine line,” said, Archibald of fighting in the NHL. “Fighting is kind of working its way out of the game. There’s a certain time and place for it. I know they’re not looking for me to go out and fight. A lot of it’s playing hard, and being hard to play against. If it comes down to it, and I have to drop the gloves, I have no problem taking on that role.”