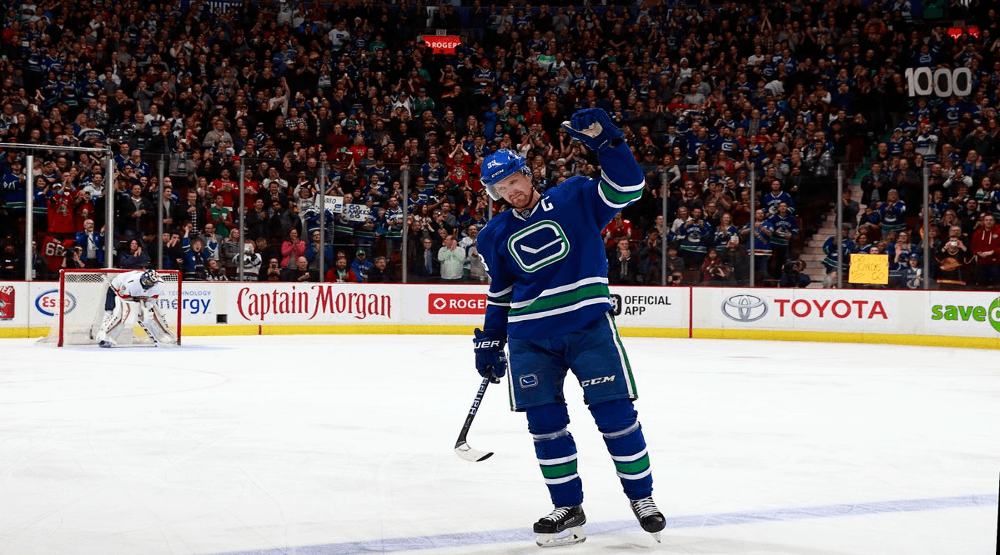 Maybe it was the tune of Holiday floating through the air, reminding us of times gone by.

Maybe it was seeing our old friend Luongo in net, making big saves, and smiling at former teammates.

Maybe it was watching Henrik chase down a milestone, a positive event in what has been a couple of pretty negative years.

Whatever the reason was, Rogers Arena felt more alive than it has in many seasons tonight.

Oh, there were still empty seats. The city is still coming to terms with its new status as “adorable little scamps” instead of “Stanley Cup contenders”.

But the place felt alive. It sounded alive. It was like you were watching a National Hockey League game again, and not some beer league game you HAD to go to because your boyfriend/girlfriend was playing that night.

Just listen to this crowd:

People were loving it.

Then there was Henrik Sedin, collecting a pass from Daniel; we’ve seen this one before, the Twins connecting for a goal. We all dreamt Hank’s 1000th point would be a pass, of course, but for a man who so often tries to avoid soaking in accolades, for a man who has literally turned around on a breakaway to make a pass to his brother, it was almost fitting that he was forced to embrace it for once.

Henrik Sedin, scoring past Roberto Luongo, for his 1000th point, helping the Canucks to a 2-1 victory.

Greatest Canuck of all time Henrik Sedin gets his 1000th point. And some love from the crowd and Roberto Luongo ! pic.twitter.com/xmfkkFkjgp

It couldn’t have come against a better team. It almost felt like it HAD to be Roberto Luongo in net for the 1000th point. Luongo and Henrik had been through so much together. The 2011 run, that core team that swept the city up and took it for a ride we’ll never forget, it was like they came back together for one last moment to give it the respect it deserves.

The Dragon Slayer watching from the bench. Brother Daniel assisting on the goal. Roberto Luongo in net. Captain Henrik scoring the goal.

It was one of those moments that reminds you why you love sports. Why you stick through the bad times. Because sometimes sports gets you right in the feels, you know?

And that makes all the pain worth it.

Shorty's voice is going to another octave when Hank gets chances. #Canucks

Henrik asked how he's gonna celebrate 1,000. "I dunno, we got an early flight tomorrow." I was hoping he'd shotgun a beer, but he didn't.

As is Henrik’s way, he took a quick celebration, and then moved onto the next game.

Daniel will soon hit 1000 points this season or next. Henrik has hit it this season. These two will surely get their numbers retired by the Canucks. HOF discussions will occur.

The Sedins are the two greatest Canuck players ever. Pure skill? You can go Pavel Bure. Captured the heart and soul of a city? You can go Trevor Linden. For a combination of everything? The Sedins stand above them all.

Remember how these guys came into the league? They entered the league with the highest of expectations. I remember one scouting website debating if they’d get 100 points in their first season or their second. They were joining a team that had just recovered from the Messier years (darkest timeline) and was starting to gain momentum behind the West Coast Express.

And their first several seasons? Remarkably average. They fell down a lot. They hadn’t filled out yet. Lots of turtle jokes. During the first four seasons people calling for Crawford’s head because he kept giving them power play time, and they weren’t producing. Some of the worst insults the Sedins have suffered over the years have come from their own fan-base.

Then they found their groove. The run to 2011 started. They began winning trophies. They won a lot of them. All of them but the biggest one, falling just short in the Stanley Cup Final.

And even then, they heard the insults. Not tough enough. “The Sedin Sisters”. “Don’t know how to win.” That video of Marchand punching Daniel Sedin opened up a new flood of insults. You can recite them by memory by now.

But through that all, they didn’t become bitter. They didn’t lash out. They didn’t berate anyone. Through out it all, they remained two of the classiest individuals in the NHL. Their work on the ice is dwarfed by their charitable work off of the ice. If you want to pick two people to represent your city, your team, and what you want it to stand for, you will not find two better choices.

The Sedins are the greatest players in Canucks history. Stanley Cup or not, they are the best.

So sit back and enjoy the winding down of their careers because we won’t see another pair like them.

Early on it looked like Luongo was going to spoil the party, but we all know Luongo chokes in the end.

Luongo was pretty great in this game, stopping 30 shots, several of them being dangerous ones. It’s hard to stop Sbisa, though, as he picked up the second goal to the sultry and sexy Eric Prydz – Call On Me.

I’ll let you listen (and watch) that for a bit. That is what Sbisa scores goals to. Yes, it’s pretty awesome.

And aside from giving us the awesome scene of tapping Henrik after his 1000th point, Luongo was smiling and smirking at Burrows, and diving and flopping to rob the Canucks when he could.

He even mishandled the puck awkwardly, giving us the full Luongo treatment.

All in all, it was like seeing an ex-girlfriend come to town, one that you broke up with but learned to become good friends with. You’re happy to see them and you can look back on the fond times you had with a smile, forgetting all the negatives.

Except why couldn’t he do the laundry once in a while? I mean, you worked all day, the least he could do is…

I’m becoming increasingly convinced Tryamkin is a robot. But a very basic one.

Like, they can’t program him to do more than one task a game.

So three games ago, he was programmed to rush to the net. It’s all he did.

Then two games ago, he was programmed to maim and murder. He hit everything in sight.

This game? He was programmed to shoot. And shoot he did.

Unfortunately, one of his shots hit Bo Horvat in the head:

Tryamkin, being the god damn gentleman he is, raced over to check on his friend.

But it does raise the point, be careful what you wish for. Shooting giants can hurt friend and foe alike.

Horvat left the game briefly for stitches, but he did return.

Linden just referred to the team's defense group as a strength – a "luxury" that they might be willing to deal from. pic.twitter.com/AN365Ybj34

Trevor Linden was on at intermission, and not that you’d expect him to dump all over his team, so it’s not shocking he did his best to talk up the team.

The one thing that raised the eyebrows of people was Linden calling the defensive depth “a luxury” on the team.

Maybe luxury is too strong of a word, and people are right to call him on it, but you can’t blame Trevor for thinking their future on defence could be strong. At least stronger than the forward depth.

Oddly enough when a goalie is playing great, your team tends to win. Miller was great again tonight, stopping 34 shots and not once did he shake his head at his own team.

Now, the Canucks have been collecting points, but the wins don’t feel great. The reason is the Canucks are riding some good luck, and great goaltending. You watch the games and know the Canucks are playing with fire in a lot of these contests.

Can the winning last? Probably not. And it will be interesting to see if Coach Willie goes all in on Ryan Miller and if Ryan Miller can handle it.

Congratulations Henrik. You are a great Canuck and even greater person https://t.co/O0guapTsM3

Going all in on a player you don’t know that well can be a gutsy call to make. My Kyle Wellwood jersey proudly shows this.

But Tryamkin jerseys after one year? That is a brave call. And looking like a very correct one.

Seemed like quite a gamble in April when I got it. @TheStanchion pic.twitter.com/YAWkb1S6WA