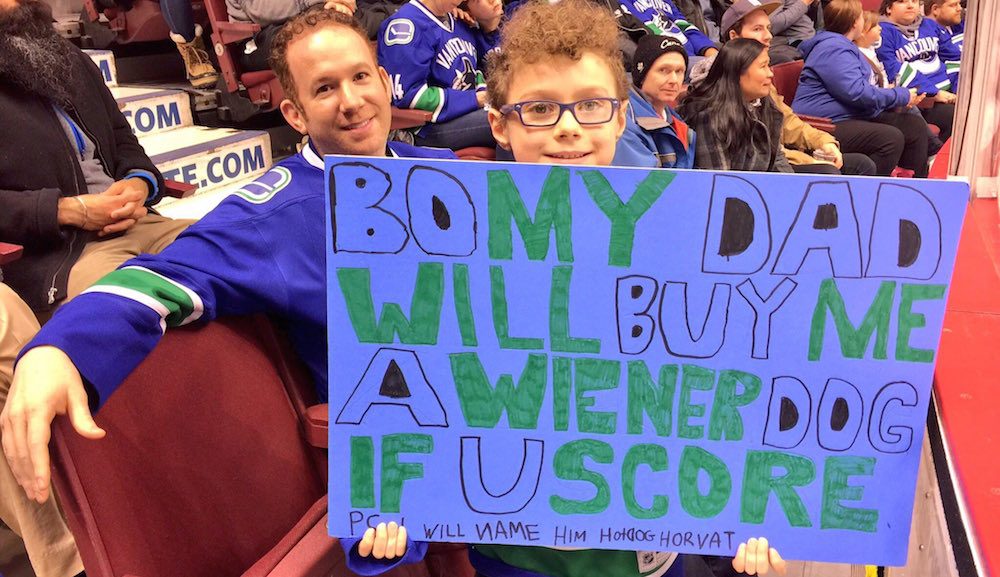 The Canucks are on a five-game winning streak and what most people care about is a wiener dog.

If you made it through Wednesday’s game, you know why.

You also know pain. And boredom.

To set the stage for the game quickly…

If I got to choose between being hit in the face with a baseball bat & tickets to a Canucks Coyotes game, Id honestly have to think about it

Midway through the first…

Gosh, Arizona is playing like they are the local men’s beer league on the ice. #Canucks #Yotes

The last two wins have been over the worst two teams in the NHL.

Monday, they just squeaked out a 2-1 win over Colorado. Wednesday, despite a 3-0 score, they didn’t exactly dominate Arizona.

But look, Vancouver’s just one point out of the playoffs again, and who thought that’d be the case a month or two or three ago?

When I tweeted this, I thought it was destined to be just another SixPack item.

“Great sign – too bad it didn’t happen for the kid,” I thought I’d write after.

Then, with the Canucks up 2-0 in the third, people started pushing for it.

Get bo a goal. Get that kid a wiener dog

So here’s the little guy getting the dog. 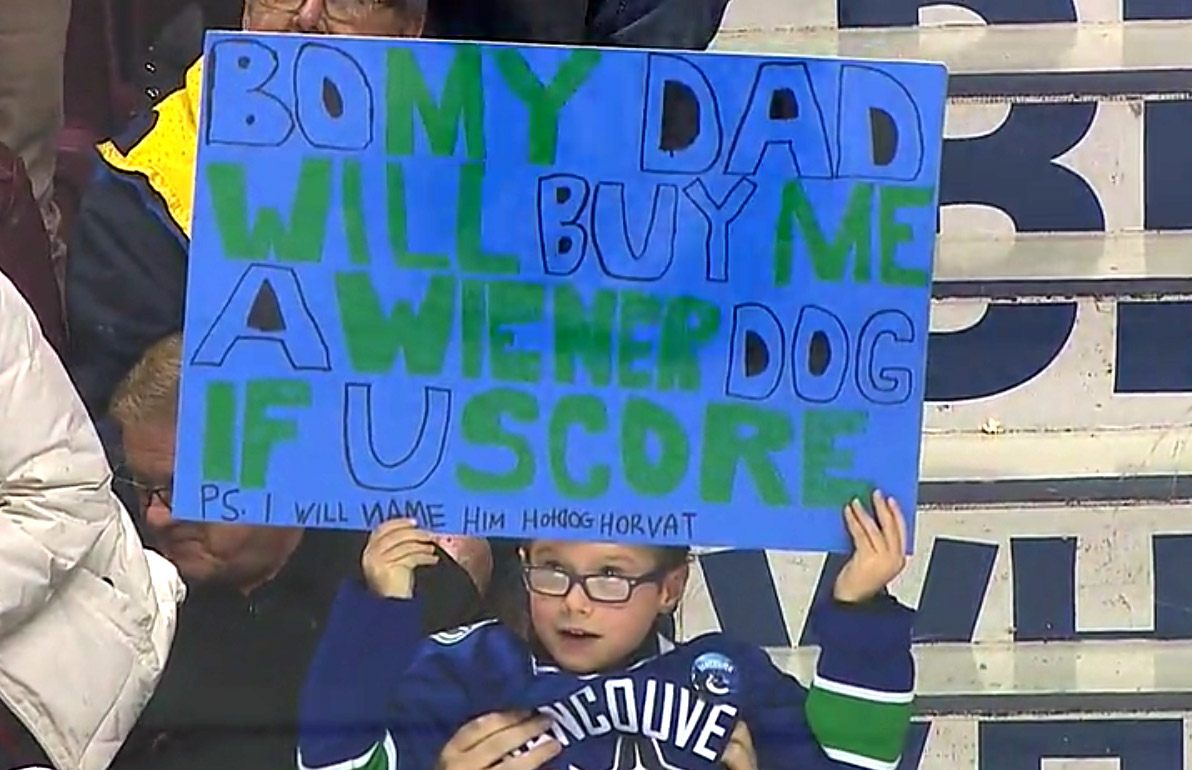 “I noticed [the sign] at the end of the first or the second period. I wasn’t sure exactly what it said. It said something about a dog. Then I read it a little closer after.”

Did he think he’d manage it?

“That doesn’t happen very often when you make a sign like that and the player you want to score, scores. I was happy to do that for the kid.”

And when he found out the dog would be named “Hotdog Horvat”.

“Oh, perfect (he was laughing)

“Yeah, doesn’t matter to me, hopefully the kid gets the dog, that’d be awesome.”

Horvat gave a signed stick after he was named the games third star to, who else, wiener dog boy. #Canucks

Great content in this tweet Irf… but I’m not sure “Wiener Dog Boy” is the nicest name for the kiddo.

I (#canucks fan) am happier about:

Well, without Hotdog Horvat, there wasn’t much to see.

Shots were 24-22, Vancouver, shot attempts were 45-39. Vancouver was protecting a 1-0 lead until six minutes into the third, and Arizona pretty much gave them the goal.

Credit to Baertschi for pouncing on the puck and shooting it home, but it wasn’t the most convincing lead.

To give you an idea of excitement levels: both teams each had a power play in the first two periods, and both managed one single shot on net in two minutes with the man advantage.

Six minutes into the third, Brandon Sutter somehow drew a penalty shot on this play.

Not sure if the NHL hoped to make up years of horrible calls on the Canucks with this, or if they’re in on Arizona’s tank… but that’s what they called.

Sutter did his part with a pretty penalty shot goal.

You know the rest of the story: Horvat scored, Miller got his shutout, and the Canucks became the hottest team in the world over the past five games.

If you read my SixPacks, you know it’s coming. I’ll keep it short today, not because it’s not still an issue, but because I’ve been here before.

And show it’s not just me who feels this way…

@omarcanuck then maybe he should stop with the Make-a-Wish placement of Megna on their line and give them a proper winger.

I like seeing Bo and Bae put up points, but I’m still a Sedin fanboy at heart. Having them anchored by Megna is such a joke

They’re right. They’re all right. The Sedins played a hard, inspired game. They had chances and nearly scored. With a Burrows or a Rodin, they would’ve. No question about it.

Like Jeremy, I’m no fan of watching the Sedins fade away because of a bad linemate.

But that’s enough on that today.

By now you’ve heard the Canucks grabbed Reid Boucher off waivers on Wednesday.

“I’ve seen him quite a bit and I saw him when he was with New Jersey … He’s a stocky guy, he’s strong, he’s a shooter. He’s a workman-like guy – he’s going to work, he’s not just going to stand there waiting for his shots.”

“Better than ok. He’s not a plodder … he’s a darter as opposed to a really fast guy.”

5. The one that got away

He’s going to have an impossible time getting real Calder love because we’ve got dudes doing historic stuff this season but he’s for real.

Look, we won’t know if the Canucks got the 2016 draft right until a few years from now when Olli Juolevi is in his second or third year in the NHL…

Thing is, Tkachuk, who was most people’s default pick when the Canucks selected, is giving Juolevi a lot to live up to.

Benning, who was hired because of his scouting background, wasn’t supposed to whiff…

yet he’s not exactly dominating the drafts since he arrived.

Can you read lips?

That’s Eriksson, after he turned a grade A scoring opportunity into nothing.

And how about Willie as the game started.

Hey, we struggled to keep our eyes open most of the game too, coach. Don’t be too hard on yourself.

Note: Thanks to Ryan Biech for the great gifs