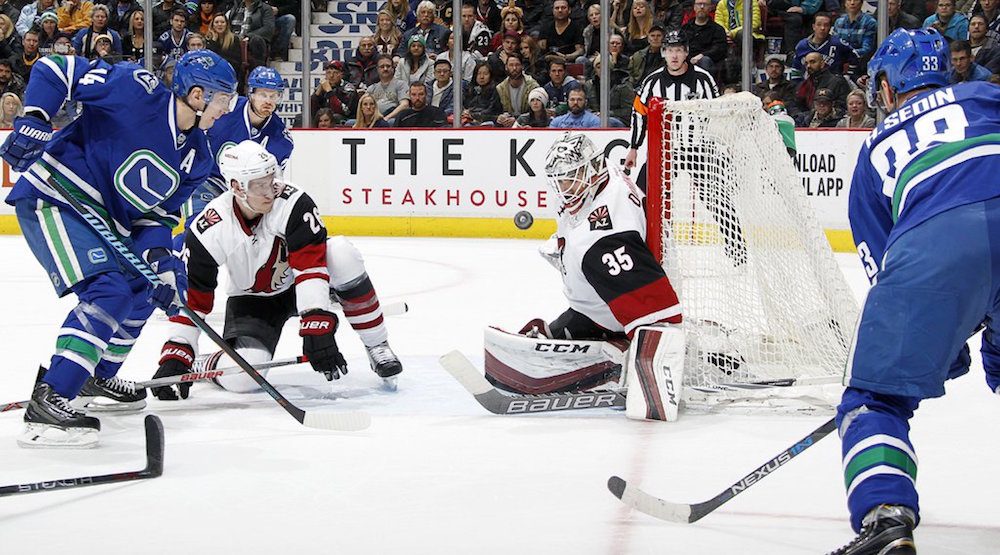 The Vancouver Canucks have a glorious opportunity tonight.

Having won four games in a row, the Canucks host the second-worst team in the NHL – the Arizona Coyotes.

A win tonight would mark their fifth-straight victory, their longest streak of the season. Not only that, it would be their longest winning streak since they won seven in a row in December 2013, when Torts was coaching.

The Canucks should have a good opportunity to extend the streak against a Coyotes team they’ve already beaten twice this season.

The Canucks picked up Reid Boucher off waivers from New Jersey today, but he won’t be in the lineup. Alex Burrows appears to have recovered from a scratch on his eye, and should replace Anton Rodin.

Playoffs? You must have the wrong team.

Nope. Believe it or not, the Canucks are creeping into the playoff conversation thanks to their recent win streak.

The good news is that, should the Canucks win tonight, they’ll be just one point out of a wild card spot. They’ve come a long way since Christmas when they were seven points out.

The bad news is that there are a lot of other bubble teams vying for that spot, and the Canucks have more games played than most of them.

It’s not the most ideal situation to be in, but people are finally starting to put ‘Canucks’ and ‘playoffs’ in the same sentence, which couldn’t be said a week ago.

Edler and Tanev are key

The Canucks have spent a decent chunk of the season without one or both of their top two defencemen, and it has hurt them tremendously.

Though they don’t show up on the scoresheet every night (quite rarely in fact), Edler and Tanev have both provided a steady veteran presence sorely needed by this team.

The proof is in the wins. In the 16 games Tanev has laced up for this season, the Canucks have gone 10-4-2. Meanwhile, they’ve managed a respectable 13-10-2 when Edler is in the lineup.

"Having Tanev & Edler back has been huge for us. They're in full stride and it shows. It stabilizes everything we do on defence." – Sbisa

In the 11 games where both Tanev and Edler have played, the Canucks are 8-2-1. That’s a pretty impressive stat, and it bodes well for tonight’s match against the struggling Coyotes (2-8-0 in their last 10 games).

Radim Vrbata had one of the worst seasons of his career with the Canucks last season, but he’s been rebounding nicely with Arizona this year.

The 35-year-old leads the team with 24 points in 37 games, five points more than the next highest player.

His bounce-back year hasn’t translated to either of the meetings with the Canucks though, where he’s been held without a point with a -3 rating in two games.

Beyond Vrbata, Oliver Ekman-Larsson and Max Domi have been the only consistent threats offensively for the Coyotes.

In goal, Mike Smith has been having a strong season despite a poor record, currently 7-10-4 with a 2.82 GAA and .920 save percentage. He just hasn’t been getting the goal support.

With the Canucks coming in hot against one of the weaker teams in the league, this could finally be the day the team gets back-to-back regulation wins. It just makes too much sense.

Even the Canucks – a team known for often defying what is expected of them – can’t mess this one up.

The top scorers will come through in this game, with the Sedins and Horvat each picking up points in a 4-2 Vancouver win.