It’s been 11 years since a player with a last name other than Sedin has led the Vancouver Canucks in scoring by season’s end, but that’s exactly what could happen this year. 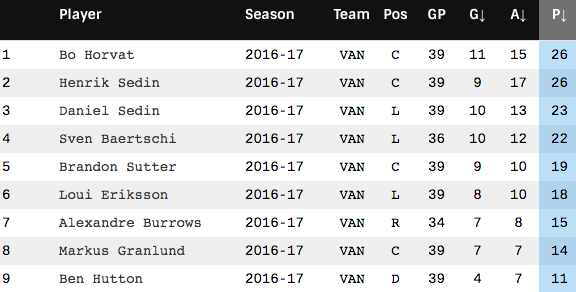 Bo Horvat overtook Henrik Sedin by one point for the team lead on New Year’s Eve, only to have Henrik tie him on Monday with 26 points. Horvat is in soul possession of the team lead in goals though, picking up his 11th of the season against the Colorado Avalanche.

Shades of 2005-06 when the Sedins began to take over from the West Coast Express?

Will Horvat sit at the top of this list after Vancouver’s final regular season game on April 9th? I’d still put my money on Henrik or Daniel Sedin, but it’s not a stretch to think it could happen.

Horvat suffered a bit of a sophomore jinx to begin last season, but still wound up with 40 points by season’s end after a good second half. In the calendar year of 2016, Horvat’s numbers are very good. In the 82 games he played in 2016, the 21-year-old had 24 goals, 31 assists, and 55 points.

With 26 points in 39 games, Horvat is on pace for 55 points for the 2016-17 season as well. That’s not an impressive total for a team scoring leader, but it is impressive for a third-year pro.

To put those numbers in perspective, 55 points is equal to Henrik Sedin’s point total from last season. It’s also more than Ryan Kesler has put up in a single season since 2010-11 (although Kesler is likely to eclipse that total this year).

After a year in which Horvat tied for second last in the NHL in plus-minus, the return to health of Brandon Sutter was supposed to insulate the former London Knights standout. It would appear that has worked, although you have to wonder if it’s time to promote Horvat.

Horvat plays on the Canucks’ second unit power play, which has been more productive than their first unit at times this season. He also has been playing predominantly on the team’s third line, although head coach Willie Desjardins tends to share ice time relatively evenly between his top three lines at even strength.

Desjardins has given Horvat the fifth-most minutes this season among Canucks forwards, and while he played 19:49 on Monday, he still ranks fifth in ice time since the beginning of December.

Horvat ranks seventh in ice time among forwards at even strength, but leads the team with 20 even strength points. I’d say he’s due for an increase in minutes.

Taking a larger view, you have to wonder what this means for Horvat’s career potential. He has been projected by most to be a future second line centre that’s good defensively and can produce offence. But given his improved skating and production with limited offensive opportunity, should projections change?

At just 21 years-old, I’m not prepared to write off Horvat from becoming a bonafide #1 centre, but there’s certainly more work to be done.

But if Horvat can reach the 55-point mark on a third line with second unit power play time, imagine what he could do with better linemates and a more offensive role?