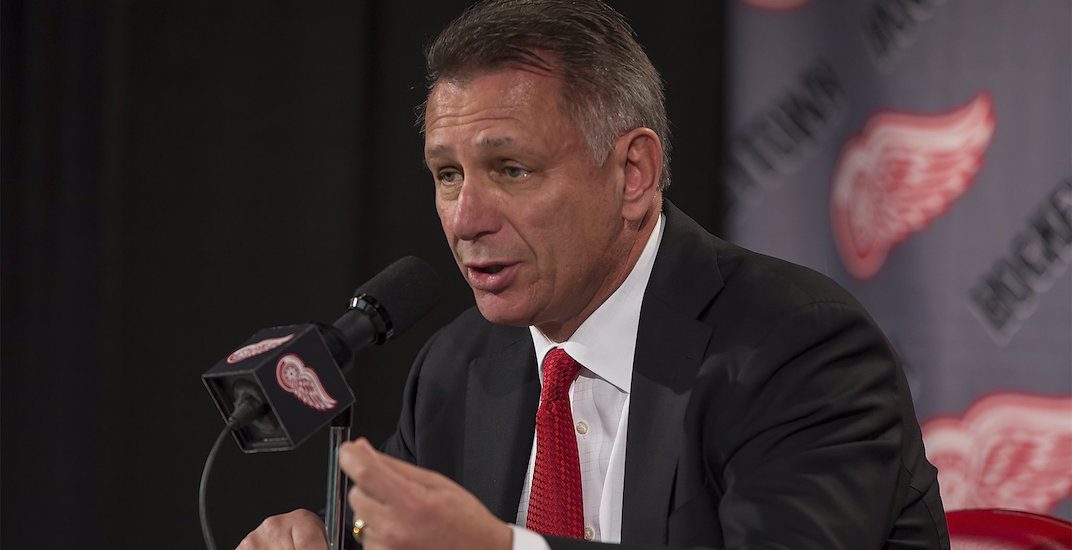 With just over a month to go before the NHL trade deadline and less than three months remaining in the regular season, the Jim Benning watch is getting more intense.

Jim Benning tells Sportsnet's Iain MacIntyre ; "“I’m going to keep doing the work.” My hope is I get to continue on and keep drafting and developing these players. I’d love to come back. But that’s not my decision.” #Canucks

The Canucks general manager since 2014 is without a contract beyond this season.

So what’s the hold up? Good question, although it certainly seems like president Trevor Linden and Canucks ownership are in a wait-and-see mode. If that’s the case, they can’t like what they’ve seen on the ice this season.

It hasn’t been all bad for Benning though, as many of the team’s prospects have been thriving in other leagues unlike anything we’ve seen with this franchise in a long time. But when you’re finishing at the bottom of the standings every year, it should be expected that acquire good young talent.

But then there’s the crown jewel of the Benning era, Brock Boeser, who was a late pick in the first round of the 2015 draft.

Whether Benning deserves to be fired or not is the topic of another article.

One thing’s for certain, the Canucks will have options.

Let’s start with the guy everyone is talking about, Ken Holland.

He’s been the general manager of the Detroit Red Wings for 21 years, but he’s without a contract for next season. With Wings owner Mike Ilitch passing away last year and the team on a downswing, the timing could be right for the Vernon, BC native to come home.

The good: He’s as experienced as they come and knows what a well-run NHL franchise looks like. The Red Wings were one of the best drafting teams in the league for a long time.

The bad: He’s won three Stanley Cups as GM, but he was also dropped into a favourable situation, being hired in the middle of back-to-back Cup-winning seasons. Was he the beneficiary of a good system and some lucky draft picks?

The verdict: Holland is a good GM and the Canucks would be lucky to have him. He inherited some nice pieces in the 90s, but he also oversaw 18 straight playoff appearances. He drafted Pavel Datsyuk and Henirk Zetterberg in late rounds. He hired Mike Babcock. He’s had a rough last few years, but no GM is perfect.

Fletcher: We're happy with the kids we drafted. We didn't mortgage any future picks, which I think is a good thing. pic.twitter.com/T8mboxATun

Another current GM without a contract, Chuck Fletcher could soon be available.

The son of longtime general manager Cliff Fletcher, he had experience as an assistant GM in Pittsburgh before becoming the main man in Minnesota in 2009. After missing the playoffs for the first three years of his tenure, the Wild have qualified for the postseason in each of the last five seasons.

The good: Getting Devan Dubnyk for a third round pick and Nino Niederreiter for Cal Clutterbuck and a third rounder.

The bad: He traded Brent Burns.

The verdict: If you’re signing Fletcher, you’re doing so because you think he’ll learn from past mistakes. His trade record is spotty, but he’s been reasonably good at the draft table. Still, despite getting Ryan Suter and Zach Parise as free agents, the Wild have never made it past the second round during his tenure.

‘You can’t recreate, you have to reinvent.’ More from Dean Lombardi – https://t.co/vvupTn9PEh pic.twitter.com/zwROMdMDIP

No other out-of-work general manager has a resume that’s as impressive as Dean Lombardi’s.

He knew when to sell off young pieces to make a Stanley Cup push. Key acquisitions before and during the 2011-12 season, Mike Richards and Jeff Carter, cost them a lot but pushed them over the top.

Before his time in LA, Lombardi was GM of the San Jose Sharks from 1996 to 2003, taking them from cellar dweller to perennial playoff team.

The bad: Anyone could have drafted Drew Doughty, and Anze Kopitar, Dustin Brown, and Jonathan Quick were already in place when he arrived to the West Coast. The team missed the playoffs in two of his last three seasons as GM.

The verdict: Winning a Stanley Cup is hard to do, nevermind getting two of them. How does this guy not have a job right now? Go get him.

Beyond executives with GM experience, Norm MacIver is one of the strongest candidates available.

The former NHL defenceman has been in management with the Chicago Blackhawks since 2006. He was the team’s director of player development, before being promoted to director of player personnel. He’s served as Chicago’s assistant general manager for the past six seasons.

The good: MacIver has seen how to build a multi-Stanley Cup winning team. He’s also been a part of a forward-thinking management group that built through the draft, but managed to stay on top by making tough decisions in a salary cap world.

The bad: He doesn’t have experience in the top job.

The verdict: It’s always tough to analyze the work of an assistant general manager, so who knows. He’s got all the prerequisites though.

Speaking of teams that built through the draft, Tampa Bay Lightning assistant general manager Julien Brisebois is an intriguing possibility.

The good: Steve Yzerman’s right hand man since he was hired in 2010, Brisebois helps in the areas of player personnel decisions, analytics, player development, contract preparation and negotiation, as well as salary arbitration. He also their collective bargaining agreement and salary cap expert.

The bad: He’s never been a GM before, so he’d be an unproven commodity.

The verdict: The Lightning have managed to accumulate draft picks, finding a lot of good young talent while remaining an excellent team. They went to the Conference Final in 2011 and 2016, and the Stanley Cup Final in 2015. If Brisebois is a reason why, he may be the best option available.

Paul Fenton and Jeff Kealty ready to go from the Draft floor. They will announce all #Preds picks today. pic.twitter.com/L5jB72DhSl

Paul Fenton played 411 NHL games before moving into management. He’s seen the evolution of the Nashville Predators under David Poile, remaining a part of the organization since their inaugural season in 1997.

He was promoted to assistant general manager in 2006, with the franchise finding success despite a tight budget. They’ve drafted extremely well since then too.

The good: He should know how to find defencemen in the draft, and the Canucks could use a few of those.

The bad: The Preds have made it past the first round of the playoffs just four times in 18 years.

The verdict: He checks all the boxes for what you look for in a GM, except actually having done the job before.

The analytics crowd is likely standing on their seats and applauding as they read this.

Just 32 years old, Kyle Dubas became the assistant general manager at a very young age in 2015. He did that because of his analytical know-how and experience as GM of the Sault Ste. Marie Greyhounds.

The good: The days of overvaluing players like Luca Sbisa, Erik Gudbranson, and Brandon Sutter would be over.

The bad: The days of overvaluing players like Mason Raymond and David Booth could return.

The verdict: Dubas is known for new-age hockey knowhow, but he’s been learning under old school smart guy Lou Lamoriello in Toronto. If he can handle the media in Vancouver, he could be a strong hire.

Stay standing and cheering for this guy, analytics crowd.

Laurence Gilman had managerial experience with the Jets and Coyotes, before becoming the assistant general manager for the duration of Mike Gillis’ time running the show in Vancouver.

The good: His areas of expertise were some of the team’s best work under Gillis, including contract negotiation, analytics, and salary cap manipulation. He’s great with the media, which won’t be his downfall like Gillis.

He was one of the architects of the best run of seasons the franchise has ever had.

The bad: Gilman worked with the new regime for one season before being let go, so it’s hard to imagine Linden bringing him back. The team also didn’t draft well during the Gillis/Gilman tenure.

The verdict: If you’ve been listening to Gilman’s regular Wednesday appearances on TSN 1040 with Matt Sekeres and Blake Price, it’s hard to not be impressed by him.