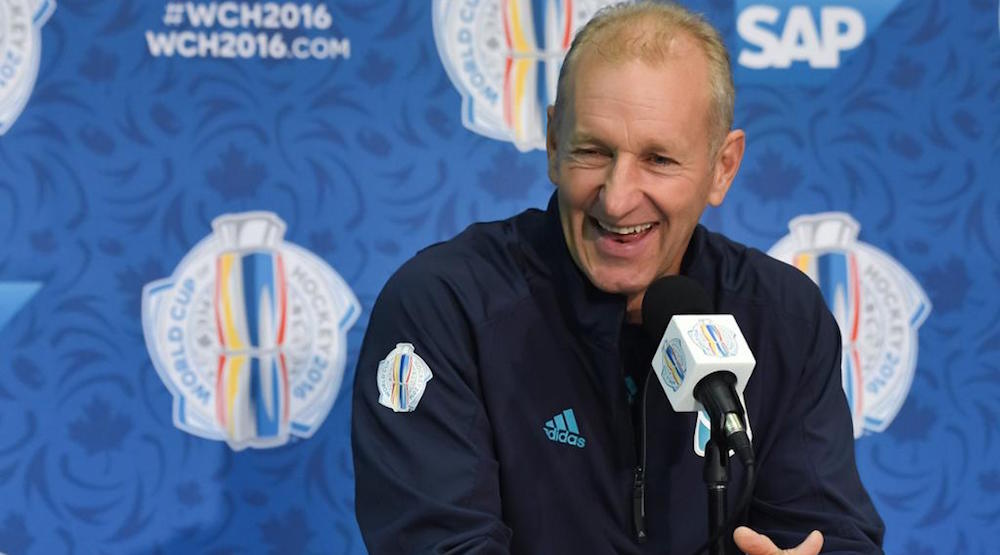 The search for the next head coach of the Vancouver Canucks is in full swing, with a new name entering mix late Monday night.

Hearing VAN interested in Ralph Krueger, who excelled with World Cup Team Europe. But, is there any desire to leave Southampton FC?

Krueger is a interesting name on a number of fronts.

An assistant coach with the Oilers for two seasons under Tom Renney, Krueger took over the head coaching role for one season in 2012-13. He wasn’t given much of a chance though, leading Edmonton during the 48-game regular season before being replaced by Dallas Eakins.

The Oilers missed the playoffs under Krueger (of course they did), but as it turned out, he had the most success of any of Edmonton’s coaches during a stretch of seven seasons. He was dealt a bad hand but managed to eek out a semi-respectable 19-22-7 record.

Since then, Krueger has been out of hockey, save for a stretch of time coaching Team Europe at the World Cup of Hockey last year. Europe was the surprise team of the tournament under Krueger, upsetting a number of teams on their way to a second-place finish.

Krueger has no doubt earned another look in the NHL. The question is, does he want back in the league?

When quizzed by the media at the World Cup last September, Krueger didn’t sound like a coach eager to take whatever he can get.

The reason? Krueger is currently the chairman of Southhampton FC in the English Premier League.

Ralph Krueger thanks @SouthhamptonFC in post-game press conference. That's a new one for a hockey coach. #WCH2016

Would Krueger leave a high-ranking and high-paying job for the NHL?

“I have had some interesting chats these past weeks, but my focus remains fully on the Saints for now,” Krueger told Friedman on Tuesday.

It’s interesting that Krueger used the words “for now,” leaving the possibility at a return. Krueger will turn 58 this summer, and the opportunities to coach in the NHL won’t be around forever. If the former professional hockey player has dreams of being back in the NHL – if the 48-game season didn’t scratch his itch – then maybe he thinks long and hard about this.

If Krueger is willing to return to the NHL, he’s a great fit for the Canucks. He has experience with a rebuilding team in Edmonton, and had Team Europe playing structured defensively.

He’s known as a good communicator, and he’s a master at dealing with the media. He would be well-suited to manage the pressure of an intense hockey market while teaching the Canucks’ youngsters.

In short, Krueger checks every box for the Canucks.

Now, how bad does he want it?